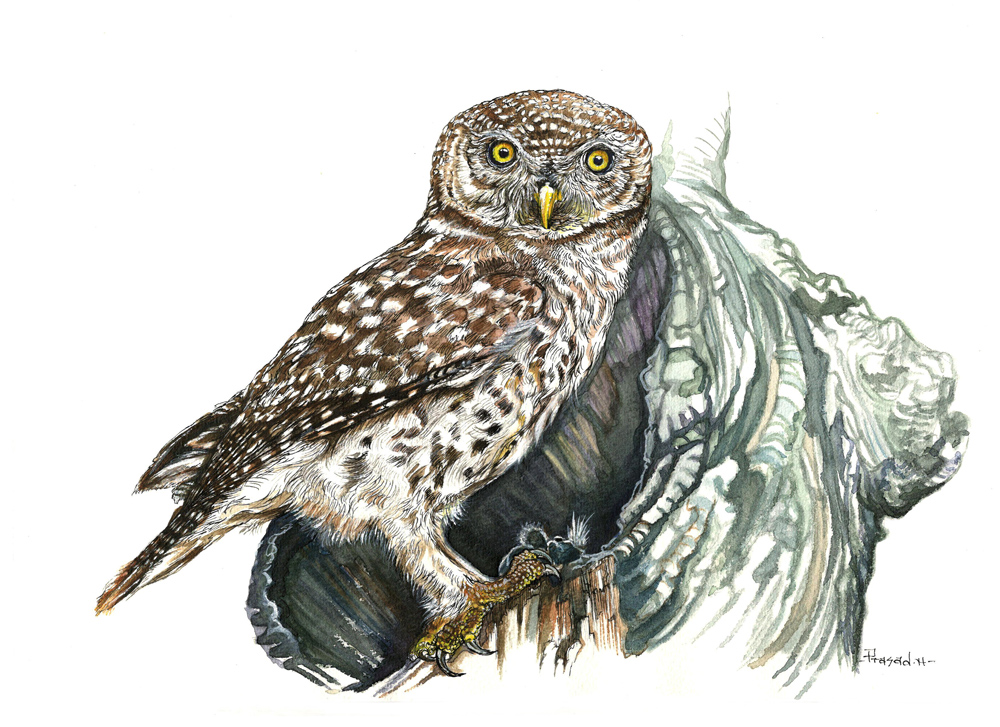 Welcome back one and all to another edition of birds of Bangalore, I was all excited after visiting my son and wife this weekend and offcourse headed out for birdwatching in Bhadravathi. Their backyard is full of birdlife. Common Iora buzzing around, Bulbul's calling, White throated kingfisher calls, Sunbirds shinning, I woke up to the Rose ringed parakeets calls and also the regulars House sparrows. With my son in my arms and listening to bird calls and delicious breakfast, what more once can ask for?

Greyish brown crown with white spots, spectacle type white lore running around both the eyes, satellite type disc shaped head, eye ring is white, eye is colored yellow with black iris, around the throat area is colored brown, bill is colored yellow, breast is mixed pattern of white and cream with spots of dark brown, body is also colored primary by brown with heavy spots. Spots appear on the tail as well, tarsus is covered with white hair and their feet is colored yellow with orange and brown spots. Talons are colored black. Both sexes are similar looking and the young ones are surely smaller in size, dull in color and lack feathers early on.

With these indications I am sure you would have already guessed our bird of this week, they are none other than our Spotted Owlet(Athene brama). They are found in Asian sub continent, greatly adapted to city lives, otherwise found in farmlands and rural plantations. They are night dwellers meaning nocturnal in nature, rarely seen during the day. The owlets reside in Lalbagh are used to humans presence and sit out most of the time. They mainly feed on insects and rodents, and I seen them pluck dragon flies, termites at lampposts outside my home.

They also sit out waiting for a false move from fruit bats who are also nocturnal. Breeding season is from November to April and about 3 eggs are laid. They don't build their nests, instead use the cavities in soft barked trees and also use abandoned parrot nests, parrots dig out holes in trees and not all such cavity is used as nests. They breed with multiple partners. Male takes care of the female once the eggs are laid and both male and female take care of the younger ones. Male mainly gets the prey for the female and young ones for about two to three weeks.

Hence we could see the male making many trips to the nest during the breeding season. These owlets don't have many natural predators, expect for the tiny birds and the Black drongo, who constantly harass them since these owlets are well capable of hunting down smaller birds.

This Spotted Owlet was about have his dinner, near the mango groove close to my home, that's when I spotted him hence the title!

There is lots of superstitious beliefs about Owls in general, I see them daily and trust me they are a treat to watch. With rural education we can help eradicate the myths about these innocent birds. Main treat to these birds are tree felling with so many trees making way for highways and new roads, they are losing their habitat in a hurry, these owlets are highly territorial as well, hence they will fight off any new male in their territory. It is essential we plant many Mango trees, why mango trees? they are ideal for parakeets and the cavities dug out by them serve excellent home for these owlets. Offcourse, we also get to have tasty natural mangoes in summer!