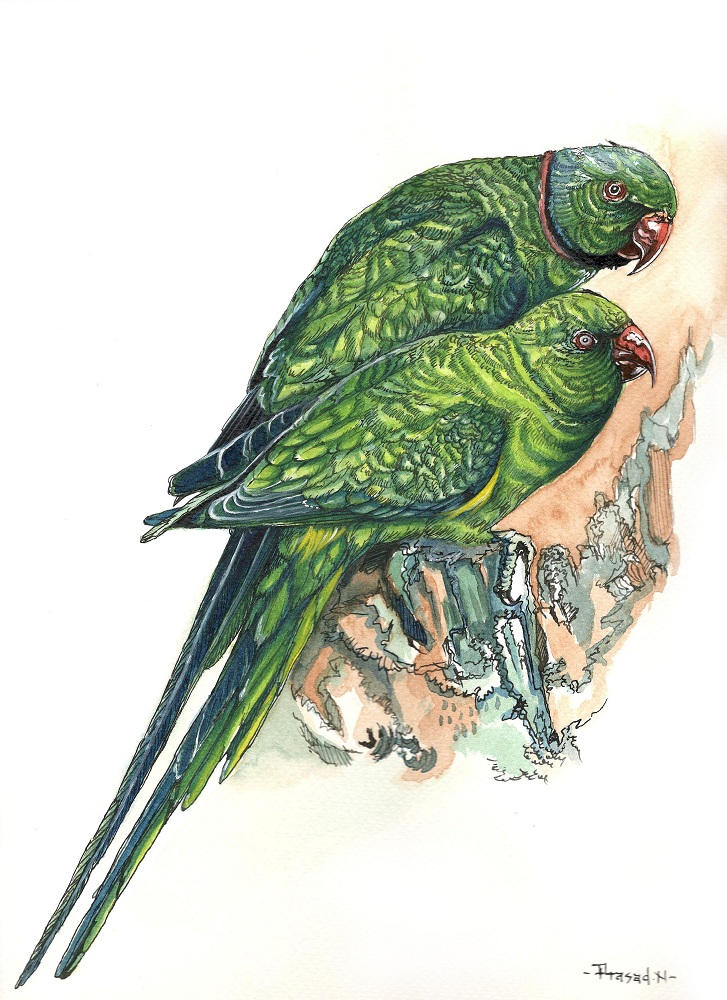 Welcome back again for another edition of Birds of Bangalore, unrelenting rains meaning very less time for birdwatching. Early morning preferably, since by noon the ominous clouds start hovering like the Black kites at dumpyards. By evening its starts pouring, though I enjoy the rains, I enjoy them during the monsoon and not during winters. Winter is a great season,I eagerly wait for the winter migrants and this is when we get to see the birds of prey as well. Watch out for them at various grasslands in and around Bangalore.

Majority of their body is color yellowish green, beak is red in color, adult male have a black ring around their neck, surrounded by another ring which is in color pink, giving them their name. Behind the crown, is bluish grey for the male, whereas the ring around the neck is missing for the female and so is the bluish grey/pink ring. Pink circles run around the eye for both of them. Patterns of Prussian blue appear on their tails and flashes of yellow also appear on the tail tips. It is clearly visible when they take a flight. Juveniles lack any ring, both male and female look identical when they are young. They have a loud squawking call, which can be heard from a far of distance.

Have you guessed it yet? Well, of course it is Rose ringed parakeet (Psittacula krameri).They feed mainly on grains and fruits, sometimes they raid the farmlands and create havoc for the farmers. They build their nest in tree cavity. Breeding season is from September to December. They mate with multiple partners in different breeding seasons, both male and female take care of the younger ones.

My association with birds started early in my childhood when my uncle gifted me with a juvenile rose ringed parakeet, I named him Meettu, and I enjoyed every minute I spent with him and have found memories of his adventures and misadventures. Once he grew into an adult, he took flight and never come back. It is common to have them as pets and their ability to talk is another fascinating feature, that encourages people to have them as pets.

They have adapted well with the growing urban spaces, bird feeding spots are working well in their favor and helping them breed in large numbers. With no natural predator, they are in safe hands for now. However what happens when one day no one is going to feed them? They would have lost their ability to peck grains from the farmlands, wait where are the farmlands in Bangalore anyway? Outskirts of Bangalore are also turning into concrete jungles and hope these birds find plan "B" soon!