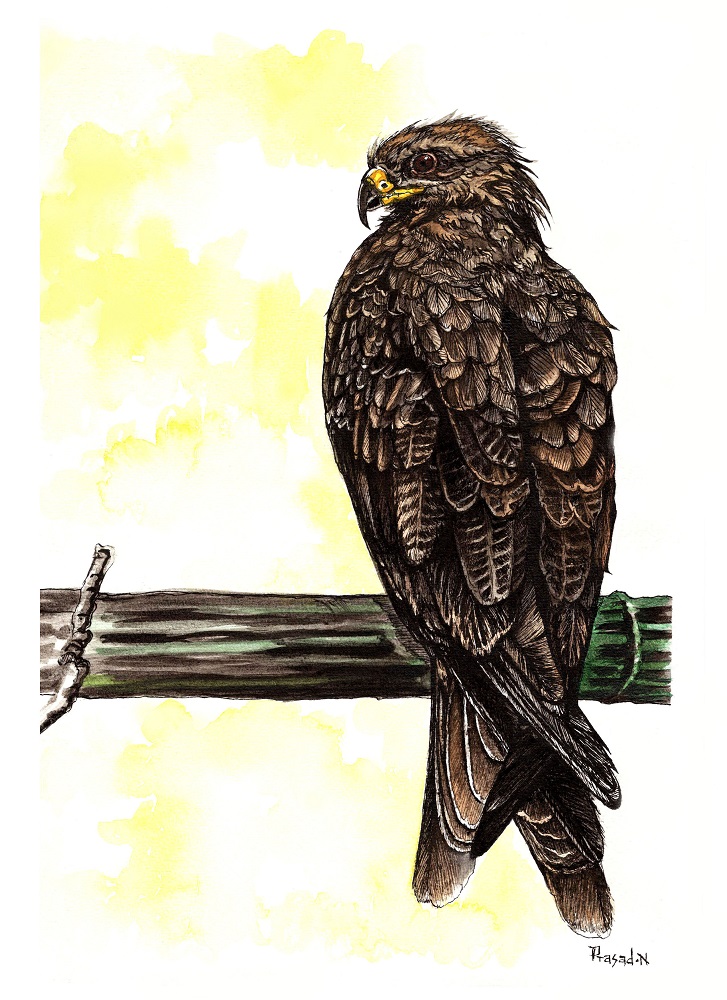 Welcome back everyone, it has been a thrilling week for me at a tiger reserve in south India. After watching the big four in the reserve, I am all charged up to roar. Staying at a jungle energizes me, it felt great to spend time and watch mammals and birds that our pristine jungles offer. While heading back to Bangalore, I watched the bird of this week. Many of them were sitting on top of trees, few other were gliding across the blue sky and I also noticed one of them getting hit by a fast moving vehicle on ring road.

The bird of this week is Black-kite(Milvus migrans). They are medium sized prey birds, head color is much lighter brown when compared to rest of their body. Around the eye much darker brown patches are seen, coloring on the neck is also lighter brown. The end of the beak is yellow and bill is black. Wing tips have streaks of light brown against the dark black feathers, their tail is forked, legs are yellow and talons are black. Male and female individuals look alike.

We can spot them almost everywhere in Bangalore, gliding around searching for rodents, leftovers and scavenging on road kills or thrown away dead animals on the outskirts. The yare also seen around lakes, feeding on fishes, smaller birds, chicks and occasionally on the herons as well. At Cubbon park, I have seen many people feeding them with pop corn, white bread crumbs and other junk food. They are also known to hunt rock pigeons and bats at many parks. At Hoskote lake, I have observed them carry a Baya weaver nest and feed on their eggs.

Breeding is during late winter, nests are built on tall trees, materials used are long twigs. Male and female contribute equally in building the nest, males guard their mate aggressively from rouge males who wait for an opportunity and mate with unattended females. On an average two to three eggs are laid and both parents take care of the new-born, taking turns in hunting, nest is always guarded by either of the adults. Common crows present great threat for unattended eggs or chicks. I have seen a group of crows stealing prey from these kites. Other than group crows, only Eagle owls prey on Black kites.

With decreasing tall trees around Bangalore, these birds prefer power lines and phone towers to scan the area. Spending long hours on phone towers can expose them to harmful radiation and instant death occurs in many cases. Electrocution is another means which has caused the death of these prey birds in large numbers. Trying to feed on road kills and getting hit by fast moving vehicles is another reason of death. Huge glass windows from tall industrial buildings reflect light, blinding these high flying birds, because of which they crash on these windows. Feeding these birds with junk food might also have adverse affects on their health.

Tall trees are very essential for these scavengers, they use it for hunting and nesting. Electric wires with plastic coating will prevent these birds from getting electrocuted. Permission for phone towers around lake beds should be avoided. Feeding birds around parks should be strictly banned. With these few steps, we could save these birds from getting into the vulnerable zone.