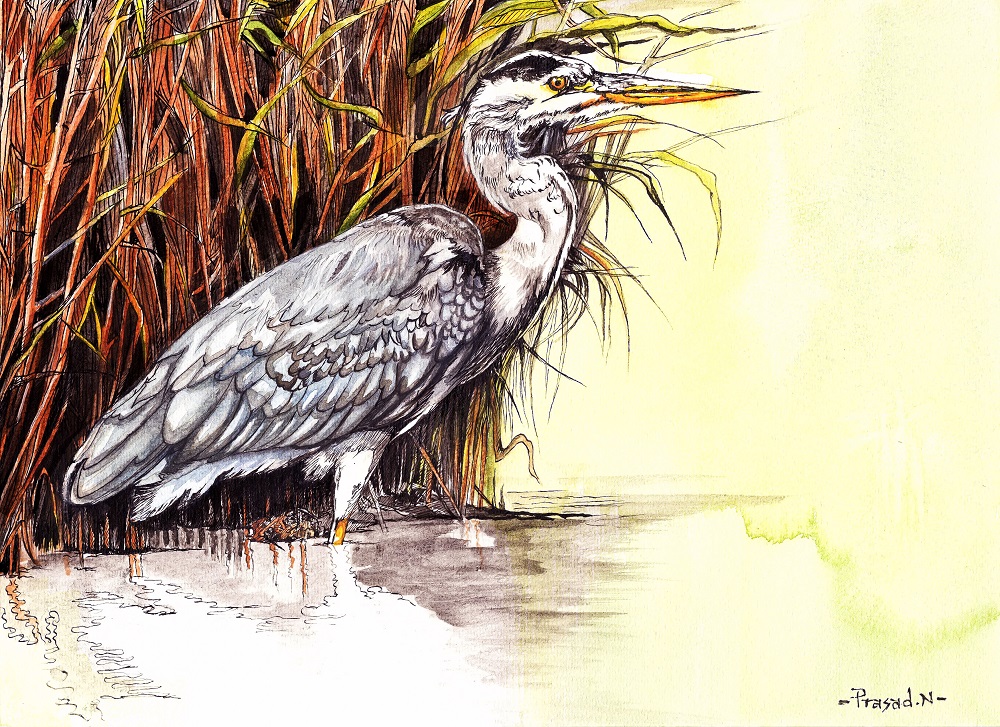 Before the new stone benches were installed at Hebbal lake, during summer days we were able to access the tiny islands. Water used to reside and we were able to walk on the shores, sit up in bamboo shades and watch waders at close quarters. However in few years lot of work has gone into this lake and many of those islands stay submerged in summer as well. About 3 years back when I had visited this lake in peak summer, spent the whole day watching these waders.

Its always great idea to make notes of our observations. As an artist I also make fast study sketches, which become finished works later in my studio. When we look back on these notes and sketches, we are transported back in time and scene. So this week is about a long wader, had spotted about five to six Grey Herons(Ardea cinerea) during that day visit, since that visit recent visits I am able to spot either one or sometimes none.

Grey herons are long, large waders, their body is usually Grey in color and hence their name. Adults have white head with a broad black patch on the crown area and a extended black thin crest. Their beak is usually upper end is shades of soft grey and yellowish bottom. In breeding plumage their beak turns crimson with shades of yellow. Long beak enables them to spears through the fish and other prey. Their neck is S shaped which a great adaptation for fishing. Their long legs help them in wading through shallow waters easily.

They feed mainly in fishes, frogs, lizards and young birds. They stalk their prey and remain in stealth mode for longer periods and let the prey come them in many occasions. When the prey is at striking distance, with quick spearing motion they strike their prey leaving the prey bleeding to death. Long wing span helps them cover great distance however their flight is slow.

With polluted lakes, less fishes, disappearing frogs, they are facing great challenge in adapting to urban lifestyle. Also since they lay eggs in reedbeds, not many of our man made lakes are conducive for their breeding. Long grass and reedbeds provide these long waders excellent habitat to stalk their prey and at the same time provide them with breeding ground. Long grass are harnessed for cattle feed at a great rate at all lakes and there is no law which prevents people from cutting them down. These grasses also are beautiful nesting material for Baya weavers and other birds. Hence protecting them is really vital for the bird-kingdom on the whole.

Steps have been taken in several lakes to de-weed, however since most of the drainage water seeps through the lakes, within few months of de-weeding the lakes are filled with weeds again. Hence we need to address the root cause the entire issue, rather than settling for temporary solutions. Only when researchers, engineers and authority come together and work in co-ordination, this is possible.

Through this artwork I wish to convey the stealth mode of the Grey Heron that I have observed and in the background the long grasses which are also equally important, the blank green half of the artwork is what these herons are staring at and they need every city dwellers support and laws which protect these long grasses from being harnessed from vital lake beds. In the name of progress we are destroying many life forms and I feel we are not authorized to do so!

Until next time. Keep watching!