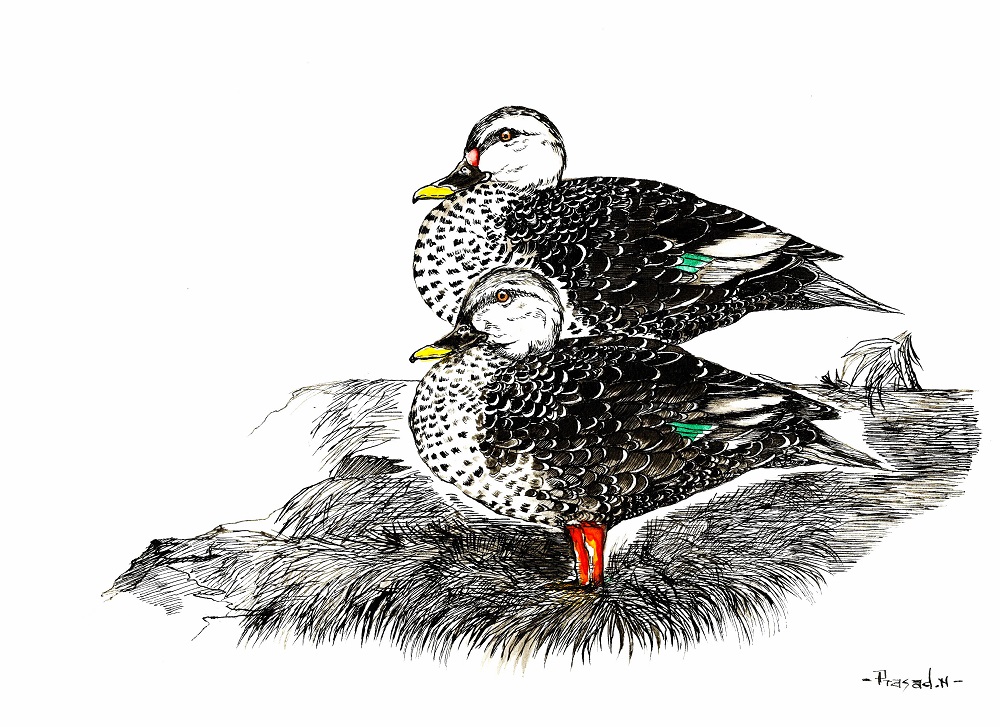 We have already reached seventh week of wildart talk, time is flying. Usually I prefer visiting any bird watching hot-spots during early mornings or evenings. Most of the birds are very active during these periods. Hebbal lake is a great place to visit during early morning, not only for bird watching but for the beautiful flowering trees and its big lawn. The benches overlooking the lake is a great viewpoint, ideal time for bird-watching here would be 6:00am to 8:00am. After which it gets crowded and bird activity reduces drastically.

This week I spent a few mornings watching a wader at this lake, a common wader found in most of the lakes in and around Bangalore. This bird is found in southern part of India and also found in eastern parts with slight variation.

Spot-billed ducks(Anas poecilorhyncha) have black streak lines that run from edge of their beak to the end of the neck. Yellow tip on their beak gives them their name, red spot on the base of their beak is prominent in males. This red spot is less prominent in females and younger ones, also younger ones have brownish plumage. They have a scaly patterned body with green speculum and white tertials and bright orange feet. Chicks are black with yellow back with wide eye-band stripes.

At Hebbal lake, there are a few tiny islands with bamboo growth. I have seen both male and female gathering the dry leaves for general roosting and these islands are also great nesting spots. During months of November and December, they breed and both male and female take turns to incubate the eggs. They also take turns to bring food for the chicks.

Mainly they feed on plants which grow around the wetlands, hence healthy vegetation around wetlands are key for the survival of these ducks. With drainage water seeping from the far east of this lake, the ph level is increasing and weed growth is slowly increasing. This affects the vegetation growth on which the ducks and other waders depend on. It would be a great idea to work the city drainage system first before working on any other infrastructure project in our city. Highly ignored drainage system not only affect water bodies, it also affect roadways during the monsoon.

Steps have been taken in several lakes to de-weed, however since most of the drainage water seeps through the lakes, within few months of de-weeding the lakes are filled with weeds again. Hence we need to address the root cause the entire issue, rather than settling for temporary solutions. Only when researchers, engineers and authority come together and work in co-ordination, this is possible.

As a common man these are my observations and suggestions, through art I wish to bring attention about the common birds of Bangalore. They need our protection, though they are under the least concern list under IUCN, their protection is vital to ensure no loss of populations in the coming years. I hope many more generations have a chance to watch these birds like we do today!

Until next time. Keep watching!