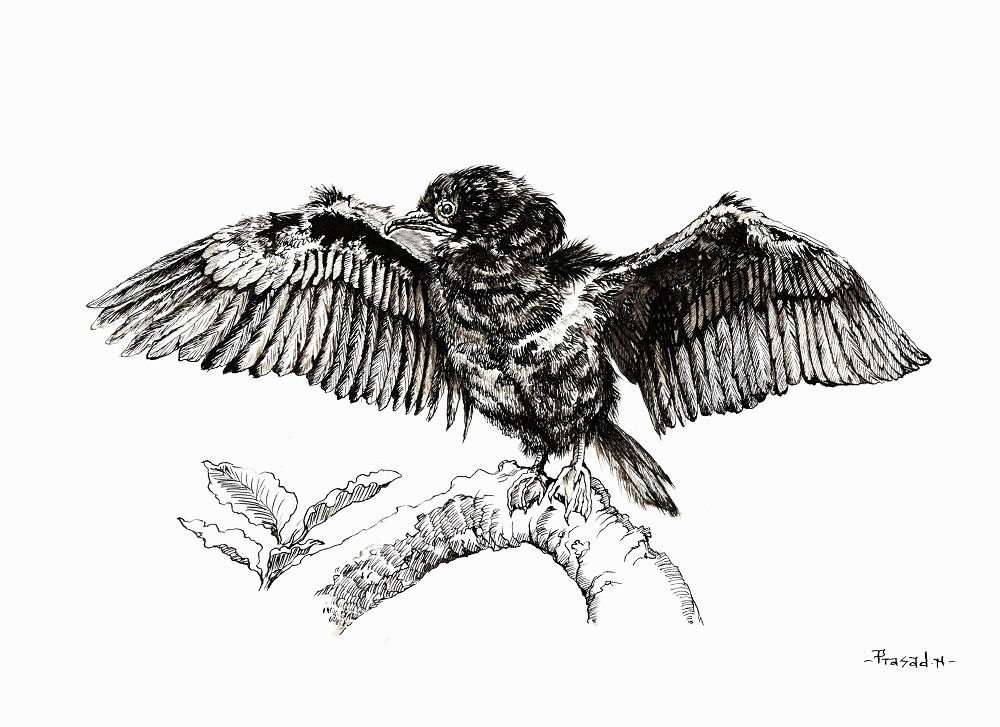 Hearty welcome back to another edition of Birds of Bangalore, this week I spent time watching a sea bird at Cubbon park, unbelievable isn't it? Though this little bird is part of the seabird family, it is found all over India, except high up north and is spread to other Asian countries. One can spot them on trees near water bodies in small groups, they are also seen on the banks of water bodies with wide spread wings.

There is a small pond at Cubbon park, where beautiful water lilies bloom, this little pond houses numerous birds. Few Little Cormorants (Microcarbo niger) have also made this little pond their home, if we watch them closely we can differentiate them with other cormorants. They are slightly smaller in size than others, with shorter crest on the head, beak is short and lacks the prominent tip. Eyes are black, breeding plumage is glowing black, with few white spots near the beak. Male and female look alike, although males are slightly larger in size.

Non-breeding plumage or younger ones have brown tone with white patch on their throat, based on size and the visible white patch, it is really tough to differentiate them with the other cormorants, hence getting a good photograph always helps. I have been observing this species closely for over two years. Their oily body and webbed feet are great adaption for diving underwater. They also have secondary skin on their eye which is used when they dive while fishing. Stripes of black lengthy tail is mainly used to change direction under water.

They make several quick dives, as per my observation on an average this cormorant made six dives in half an hour before it caught a fish. After which he spent about forty to forty five minutes drying his feathers. Little cormorants hunt alone.

Their main diet is fish, hence their population is a clear indicator of a healthy water body. Similar to most other water-birds found in Bangalore, they breed post monsoon. Both male and female engage in building nests and nests are built at about 20-30 feet high, these cormorants share their space with other water birds. This works as a great breeding strategy against predators like black kites.

With decreasing water bodies in our city, their habitat is also shrinking and there is great competition from bigger water birds as well. With monsoon being inconsistent this year, these little birds are looking at a long, hotter and tough summer ahead. Survival of younger ones will depend on availability of water and fish. Festival season also has a great impact on lakes in Bangalore, all the filth gets dumped into lakes and they could take several months to degrade. This filth has adverse effects on all living beings dependent on these lakes. Hence kindly encourage only clay and colorless idols as they are eco friendly and cause less harm when submerged into water bodies.

Saving the existing water bodies is very essential and creating new ponds/lakes is also very important to conserve water birds in Bangalore. Most of the lakes inside the city are overcrowded with migrants during breeding season. Encroached lakes must be identified and rejuvenated, lakes are very essential to Bangalore's ground water table.