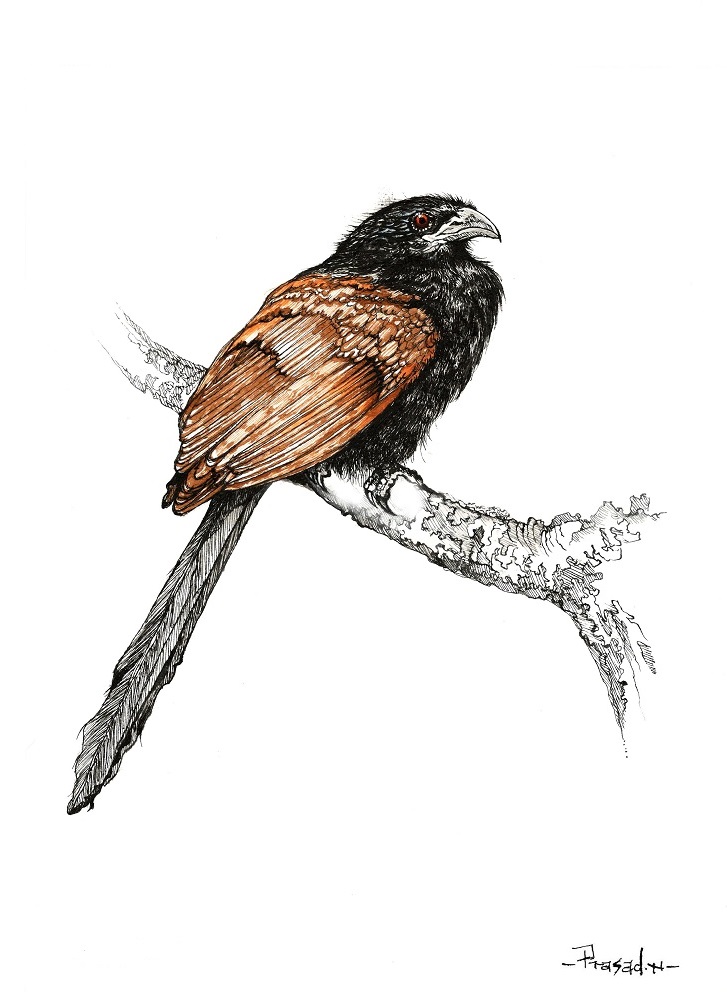 It has been rather cloudy and humid throughout this week with sprinkles of rain now and then. I have spent some quality time watching the bird of this week behind my house. There is a breeding pair who have been building their nest for couple of seasons in the Eucalyptus plantation (behind my house). Their calls wake me up every morning, though they do not sound sweet, it is reassuring to hear them. That simply means they are still in the vicinity and hence not disturbed by any human activity.

This bird is wide spread, starting from the peninsular region to down south, they have also been mentioned in a couple of mythological Indian scripts. Their calls are believed to be omens of good or bad luck, also in the medieval periods, they have been hunted for perceiving medical value. They were also hunted for game during the Maharajah's period, how do we know this? I have seen many scenes in a painting which depicts hunting, a hunting dog is seen holding this dead bird in his mouth.

I am referring to the Southern Coucal (Centropus parroti). The head is rather glossy blue with black, brownish mantle, darker brownish wings, ruby red eyes, long thin legs and blueish long tail. The young ones look similar except they are smaller in size and duller in color. Male and female adults look similar in color however females are slightly larger in size.

They feed on insects, eggs of other birds, snakes, rats and sometimes other smaller birds are also on their menu. I have noticed them active during early mornings when they dig up dead tree trunks for termites and an occasional garden lizard is eaten up. They also hunt Palm squirrels. I have observed them walking on the ground most of time and they fly only when they feel threatened. This could have been one reason for them being top species on a King's hunting list.

They mainly survive on scrublands and smaller grasslands. With urbanization expanding to every nook and corner of the city, their habitat is slowly decreasing. Being insect eaters, they play an important role in controlling various insects including the termite population. Population of rodents, snakes and other smaller birds are also in check. By losing these birds to fast growing urban areas, we might observe an increase in insect and rodent population and might have to resort to chemical pest control. Natural means of pest control (predation) is always a great way of controlling them.

Everyone is talking about disappearing forest cover, what about the disappearing trees in urban areas? Does anyone care about them and how these disappearing trees are affecting lives of common birds? Pressure of providing housing, water, food to people is driving development in urban and rural Bangalore. If gone unchecked, it could result in a catastrophe like the great plague in Gujarat. It is time we start making a difference by planting trees!

It would be great to grow few flowering plants and plant one tree each on our front yard. It is not necessary to water them regularly once they grow, occasional watering is all that is needed. When everyone grow trees, it provides shelter for many insects and smaller birds which in-turn attract larger birds.

About the sketch, it was done with camel Indian ink with dip pen, a very traditional form of drawing. The mantle and wings are done using brunt sienna Indian ink. Dip pen is a challenging medium to work with, there is no room for a wrong stroke and if we dip larger quantity of ink it will blot on paper. However, the more challenging the medium gets, more beautiful the results are. Don't you think so?

Reference photos are my own images from the field.

This is the fifth artwork, I would like to hear your thoughts on the artwork and write up, do write to us with your feedback and suggestions.