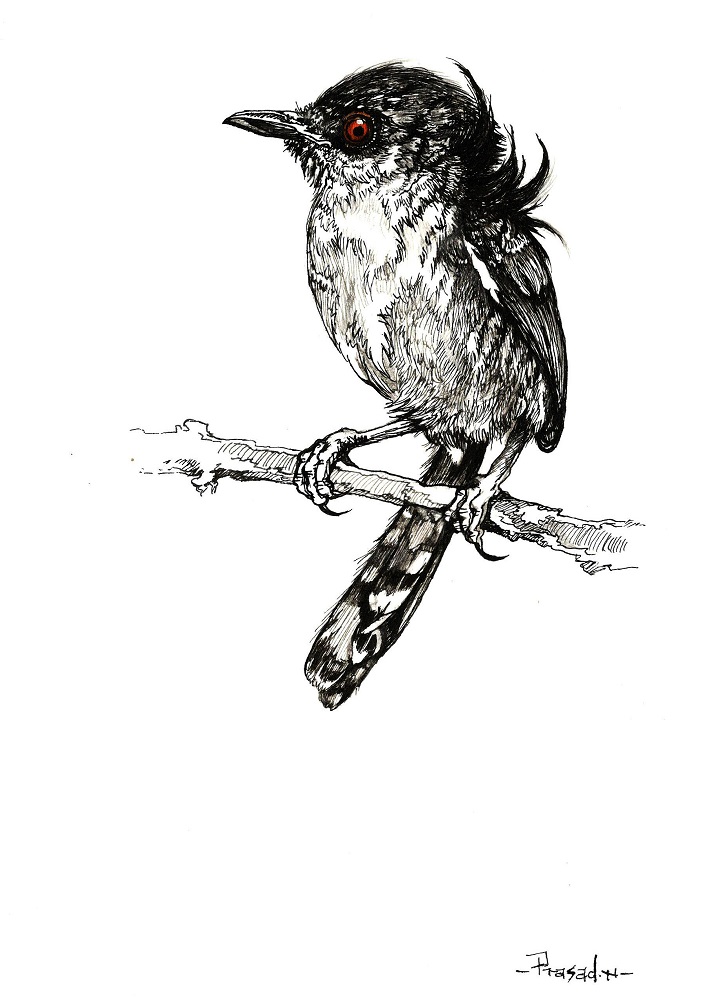 After enjoying the colorful flowers of Lalbagh last weekend here I am back again with another common bird of Bangalore. Ever since I was introduced to birdwatching in a serious way I’ve been watching this bird day in and day out. Not that I’ve not watched them before, mere watching a bird and watching their behavior, making notes in field books, are two different activities. As a kid have watched cattle egrets and greater egrets however they were all cranes! Blame it on lack of knowledge!

Things changed when I decided wildlife art to be my mainstream, knowing my subjects became vital. True art is about knowing your subject, then you'll see the magic happen.

There were two common birds that were found in great abundance in the 80’s House sparrow and Ashy prinia. Today we find that one among them has not adapted well to urbanization and moved to the outskirts. Whereas the other as adapted well to changes, though their numbers are not too great, they are still surviving.

Ashy prinia(Prinia socialis) is much smaller size warbler, they are found in scrublands and gardens. Their distinctive ashy crown should be the reason for their name is suppose. They have short black beak, creamy golden breast, rounded wings and their long tail is tipped with black spots. In breeding season their plumage is slightly darker ashy grey.

Outside my window there are many empty plots, were lantana and cotton plants grow in abundance. Have observed them feed on spiders, grasshoppers and other insects, they are insectivorous. They also make quick dash to the ground most of the time, with a spark sound. While trying to balance on twigs they have their tail up. Have seen them call out for their mates and their dance with their tail up together is a visual treat. Though they stay in pairs, they are rarely seen together. They are territorial and males fight out to keep their ground.

Cotton serve as great source for nest building, have seen about 3 eggs on an average in their nests. The pair outside my window has built their nest inside a huge lantana growth. Squirrels and Garden lizards have fed on their eggs last season, this season have seen them shift their nest to another spot. Hopefully this breeding season I'll be able to watch their young ones. This pair bred last October!

Since they mainly rely on scrubs which are quickly disappearing not sure how long they will be able to sustain in this city. With lot of insecticides and pesticides been used at farmlands and gardens their foods source is also decreasing. Everyone talks about house sparrow disappearing from our city however there are other birds as well who are getting affected. They too need our attention.

I don’t wish to sound like an old tape-recorder, however our ancestors had great tradition, seems like they knew simple and ecofriendly ways to cultivate crops. They were much eco tolerant, they knew to co-exist. Rather than spraying the toxins all over the flowering plants in our garden it would be great to let the birds do the job for us. I have many flowering plants outside my home and we don’t spray toxins, agreed this attracts lots of insects, which also attracts many common birds.

About the artwork, Ashy Prinia might look like an easy bird to draw however they are not, I had to do many beak studies before I drew the final work. Small birds are tough to draw and tough to photograph as well!

Hope we do respect our ancestor’s way of life and if there are some positives from those practices. There’s no harm in applying them. With this I rest my case! Until next week then, keep watching!