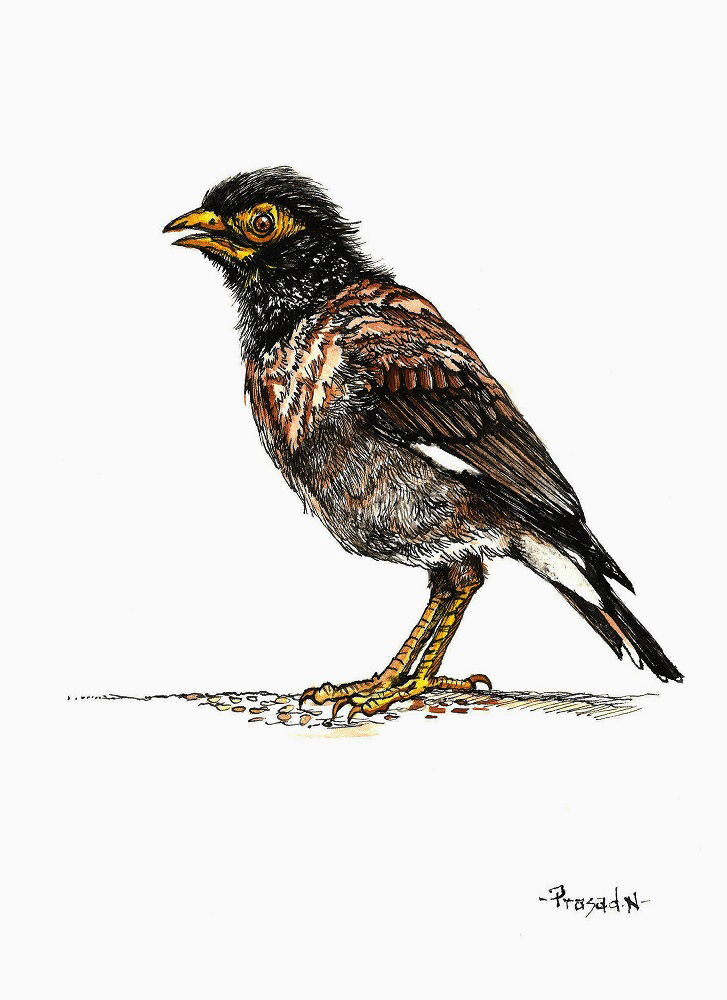 Welcome back everyone to the tenth week of Wildart talk, hope you all had a great Wildlife week, Wilderhood and I celebrated the last week with many interesting wildlife encounters across India. If you have missed out those encounters, do check them out here. After a week of visual safari all over India, it is time to come back to our common birds of Bangalore.

Our bird of this week is considered master of adaptation to urbanization, we can spot them almost everywhere in Bangalore. This bird has been introduced to other countries as well, were they are now considered as invasive species. The bird of this week is featured in Buddhist and Indian literary works. They were also kept in captivity during ancient times since they were able to mimick human voices. Take a guess?

Well, one bird fits the bill with all the above description, the Common Myna (Acridotheres tristis). For once, we have a bird which is able take on the onslaught of development and still spread and breed prolifically. Majority of their body is brownish in color, their crown is black, ear coverts are yellow, bill is yellow, primary and under coverts are streaks of white and when in flight these white streaks are clearly visible. Legs are also yellow colored, both male and female look similar.

Their habitat is usually open woodland, however they are not limited to this. They breed throughout the year which is one of the main reason for their successful survival, they also take over nests of other birds by evicting chicks from active nests. They roost in groups which also helps them fend off predators with ease. Being omnivorous also helps them adapt to urbanization, they feed in the dump-yards in the outskirts of urban areas as well. Their survival attributes to their aggressive behavior and in a few cases, invade in many introduced countries. They are able to survive in various temperatures which is also another reason for their wide spread population.

Hope the other diminishing birds could take a leaf out of our bird of this week, it would be easy to save so many birds of Bangalore without much effort. Why one particular bird is able to adapt so well to urbanization and the others are not able to, is a great question for research!

Previously, Bangalore had a great population of Jungle mynas. However, due to the aggressive breeding of Common myna, their population has been steadily decreasing, this applies to rosy starlings as well. Many other countries have realized the seriousness of this issue and now studying ways to minimize the damage. Hope we wake up to this situation and conduct studies and derive methods to save other birds who also share similar habitats.