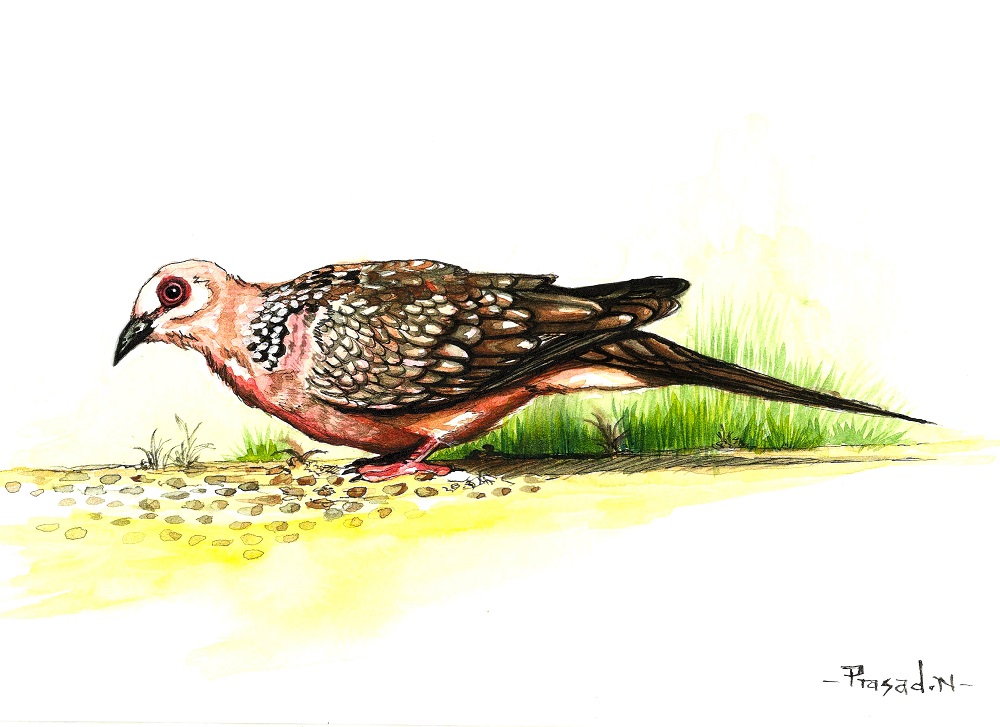 Last week we read about the invasive behavior of birds not only in their native country, this behavior is seen even in introduced country as well. Such behavior is actually recorded more in introduced countries, since the native birds are not adapted to defend themselves against a new uninvited guest. Which also brings up a valid and vital question should we introduce new species to a habitat? Mother nature knows best, she know which species can survive in what kind of a habitat. Interfering with nature if not always, most of the times will result in situations which will be beyond our control.

The bird we are going to talk about this week also has been introduced in many countries which could in near future turn into an pest replacing the native birds. Though currently facing tough competition from other birds in the urban spaces in Bangalore, they are surviving and as a child I have seen them roam about in the city itself. Now we find distributed population of them in and around the outskirts and sighting them around 25 kms to 30 kms away from the city is common.

I always associate with this bird from her song ”Krookruk-krukroo.kroo kroo...” ofcourse you guessed it right! Its a Spotted dove (Spilopelia chinensis), their name is derived from the spots on their nape. Primarily rose brown is dominant on the upper body, including the crown and its gets greyish on the under parts. Darker brown and black spots on the nape, rosy brown lining around the eye, wing feathers are dark brown with grey tips, the abdomen and vent are white colored. Outside tail feathers are also colored white and visible during flight and their legs are color darker rose. Both male and female are similar, juveniles are dull in color and smaller in size.

They stay in small groups, feeding mainly from the ground on fallen fruits, grains and occasionally on insects. I have also observed them feed from the leftovers at Cubbon park and Lalbagh. They breed during summers and both parents equally participate in nest building and taking care of young ones. They can build nest on outlet of air-conditioners on tall structures, this adaption as help survive in cities, which are growing vertically. They face stiff competition from Hill Pigeons, who stay in larger groups and also known to attack spotted dove nests.

Spotted doves become prey to common raptors around the city often. Agricultural fields are disappearing at great pace in and around Bangalore, since these birds mainly depend upon grains they are losing their habitat swiftly. However I have observed many city dwellers feeding birds in huge parks, hence most these birds are now surviving and breeding at brisk pace.

Its a dilemma off sorts, is feeding birds in these parks a good idea? What if one day no one turns up to the park and these birds don't get a grain to eat? How will they survive? Will their natural instincts still hold good? Every time I see people feeding birds there are so many unanswered questions that arise, hoping to find my answers someday. It would require a research on this behavior for sure to find out the results on such human-bird interactions!