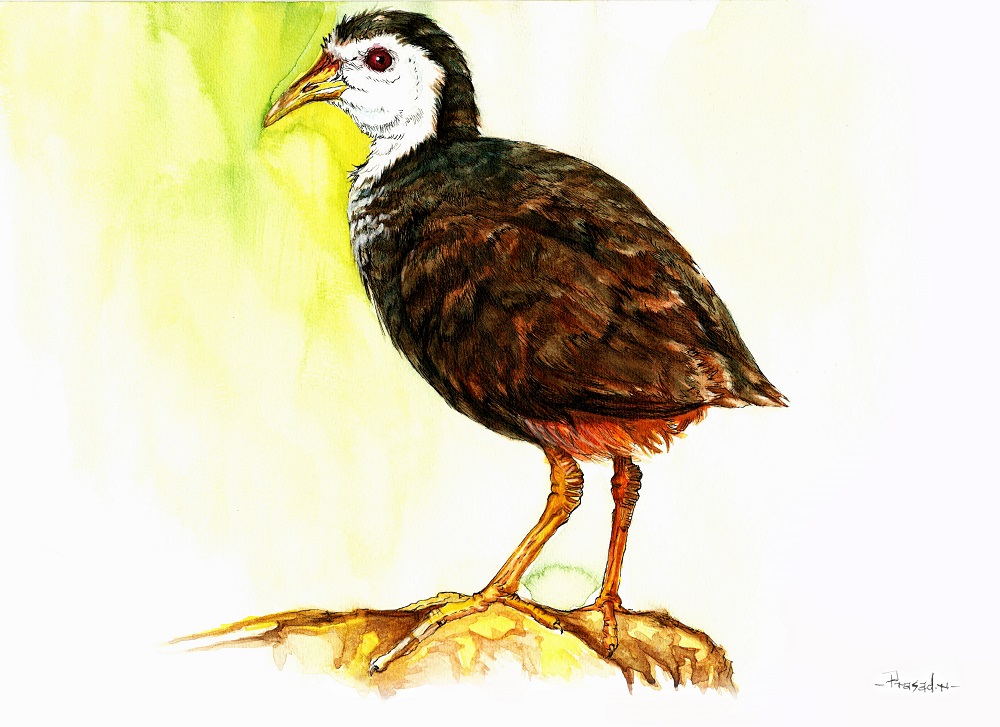 Last week I had been to Ranganathittu Bird Sanctuary, though its off season the light was great and it is one of the best place to watch Greater Thick Knee in whole of India. Especially for photographers who are obsessed with clean bokeh, its a place to go, one day trip for Bangaloreans as well. Now you might be wondering why I am talking about a bird sanctuary here, there is a link, I also got to watch one the commonly found birds of Bangalore there.

Offcourse this bird spends most of its time around water-bodies from the crake family, most of the crakes are quiet shy birds and not easily spotted. However our bird of this week is usually seen in many lakes, spotted them at Cubbon park pond, Lalbagh, Hoskote, Hebbal etc. Saw them almost at all water-bodies, at the bird sanctuary though was able to watch them at close distance which also helped me observe them.

White breasted-waterhen(Amaurornis phoenicurus) is our bird of this week, their crown is grey colored, their brow, neck and breast are colored white which also gives them their name. Beak is light lemon yellow with a red pigment on the upper mandible. Eyes are dark red in color, body is also mostly brownish grey, long tarsus and feet are yellow, vent is orange, they have tiny tail which is brownish. Their long toes help them walk on the vegetation which grow on water, great adaption that is commonly found in many water-birds who prefer walking on water-plants. Both male and female look alike, juveniles look duller in color.

They mainly feed on insects, vegetation, small fishes, tadpoles and sometimes observed feeding on insect larvae. They are mostly active during monsoon season which also happens to be their breeding season. Males build the nest on dry area, both male and female take turns to incubate the eggs and both involve themselves in protecting their young ones once hatched.

Like all the water-birds these waterhens are also mainly dependent on water-bodies,we already covered many issues in our earlier posts about disappearing lakes, we need to make provision for these birds to survive, rejuvenating lakes is the only way to do it. Also after rejuvenating, making sure that near by industries don't dump all their industrial waste into these lake is very important. Great example is the Varthur lake which is foaming big time, which is a result of constant dumping of industrial waste.

Many of these birds also feed on insect larvae, which is natural way of controlling insect population. When most these birds are helping us out in so many ways even without us asking for it, it is our responsibility to make sure we give them a chance to co-exist!