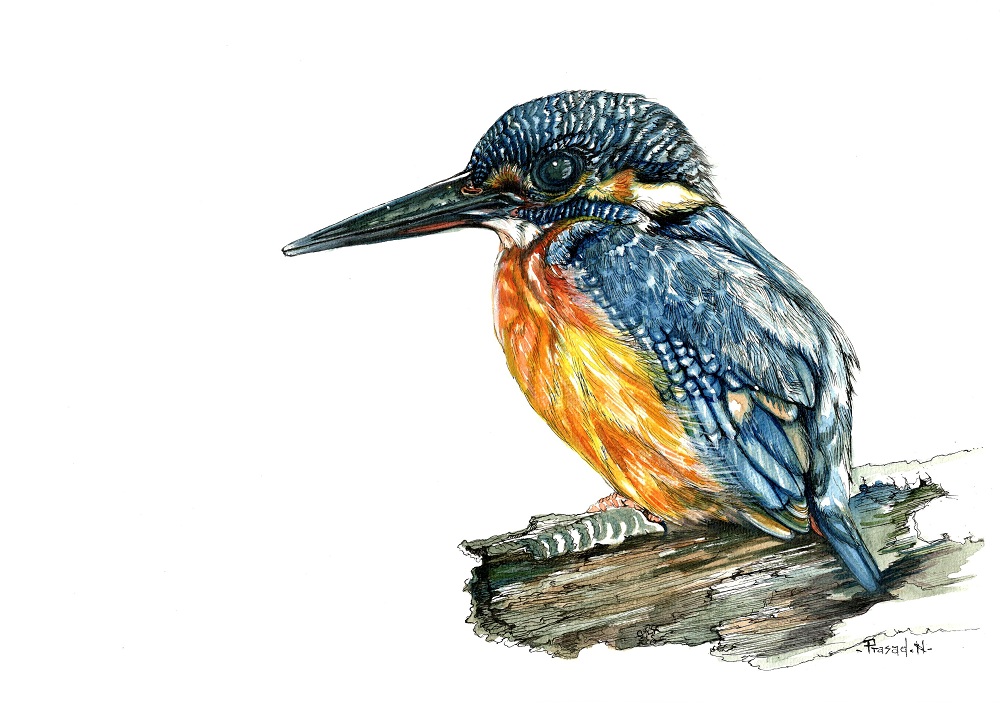 Welcome back to another edition of birds of Bangalore, wishing you all a great and prosperous new year ahead! Winter mornings are such a delight to sit back around lake beds, with hot sandwich and binoculars just before sunrise, is the best time to choose our spot. It’s also good practice to wear warm clothing before heading out for birdwatching, hand gloves, woolen sweaters, woolen monkey caps are few essentials I wear. I always visit a place frequently when a particular subject visits the same spot; visit is frequent when I am not able to get the desired image at the first go.

Guest of this week though took some time to come out, sun was out gingerly, cool breeze blowing away, and they call this the 'golden hour'. Best time to make images I was told. Finally he did fly by in a hurry, a flash of brilliant blue, touch of orange burning through the water surface and a call “tei titi titi titi” echoing entire lake. That’s how a king makes his announcement.

With this much description I am sure, you would have guessed already! Well our guest is Common Kingfisher (Alcedo atthis). They prefer streams, rivers, lakes with good green cover on the banks; it could be long growing reeds, shrubs, bushes and also branches that bend down towards the shallow water. Their main diet is fishes, they frequent the branches, sit patiently; shadow blends with the shadow of these branches on the surface of water. Quick dive-in and catches the unaware fish off guard. They are highly territorial, and also their presence at a water-body clearly indicates how healthy that wetland is.

Their eyes designed for underwater diving. Once they enter water, they switch to secondary layer, which enables it to see its prey underwater, this layer also contains oil droplets, which repels water. This is key ingredient for underwater hunting.

They breed throughout the year. They burrow holes on the banks of rivers, lakes and streams. Both male and female incubate the eggs; female primarily takes care of the young ones after hatching. More than half the young ones don’t survive more than a week after leaving the nest. First dive into the water proves to be most dangerous, where many young ones end up drowning.

Other causes of death are dogs, cats, rats, collisions with vehicles and windows, and human disturbance of nesting birds. At Hoskote lake there are many water pumps coming up every other day which also affects these birds. Since Kingfishers are high up in the food chain, they are vulnerable to build-up of chemicals, and river pollution by industrial and agricultural products excludes the birds from many stretches of otherwise suitable rivers that would be habitats. I’ve seen about four plus of them three years back at this lake however now on my visit I see only one of them, which clearly indicates this water body is getting from bad to worse. In many man-made lakes I don’t even see one of them, which also indicates that quality of water might not be good. So it becomes even more important for us to save such indicative species!

So until next week, keep watching!