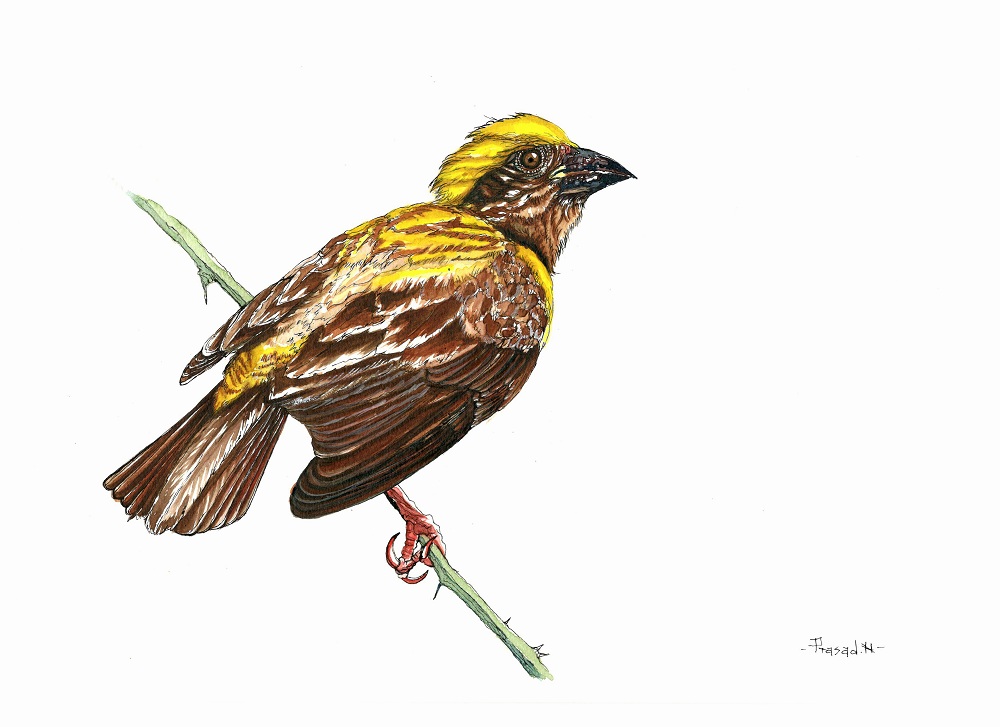 Welcome back to everyone, I am writing this article with great excitement, as it's been a week into my fatherhood. I dedicate this article to my beloved wife Asha and my son Dhritiman, I would like to thank them for allowing me some time off even during these tender days and letting me focus on my interests. If not for them none of this would be possible. While my son is listenining to the chirping sounds of Ashy prinia young ones outside the window, I head out to pay a visit to our guest of this week!

Hoskote lake is not only a haven for waders, it does have a wide spread of grassland, shrub-land, fields and other farmlands around it. This makes the ideal habitat for varied species of birds to thrive, also has old water wells which is vital for our guest of this week. It was not too difficult to locate them. I know a spot where they frequently visit and are in healthy numbers.

While I sat watching a female Purple-rumped Sunbird drink her heart out from Crown flower (Calotropis gigantea), slowly the sun made his way out, munching on the delicious sandwich, eagerly waiting for them to appear. One by one they made their way out. They are average size birds with a conical bill; Male beak is colored dark black, they sport a crown in golden yellow, eye is dark brown with black iris in both sexes. Patch of dark brown is present in the ear coverts. Patterns of yellow and brown run through their body with a square short brownish tail. Female upper and lower mandible is cream-colored with patches of yellow, streaks of brown run through her crown, cream-colored chin. Similar to the male, brown pattern run through her body however coloration is much duller. Tarsus is pink colored in both the sexes and long nails to support hanging on tiny blades of grasses. Young ones are of course smaller in size and both sexes look similar.

With this much description I am sure you would have found out about our bird of this week. Well, they are Baya weavers (Ploceus philippinus). They mainly feed on seeds; they look out for farmlands for grains during harvesting season. I have noticed them pick tiny insects from fields for their younger ones. Hence the neighboring farmlands around this lake are ideal for these birds.

They depend on the reeds for their building material. One day while watching Little Grebe, I noticed a male weaver cut the reed using his beak and pull out a long thread like material. It was great to watch this master craftsman in action. Usually they build their nests on thorny trees around water-bodies. However the spot I visited was an abandoned well, with suspended tree twigs hanging towards the water. Male is involved in building these elaborate hanging snake charmer instrument type nests, once the nest is ninety percent complete, the female inspects the nest, after she gives a go ahead, he completes the nest with a tunnel like bottom structure. They take about eighteen days to construct this nest.

Some females collect cotton, wet mud, hay sticks to decorate the interiors, males also collect wet mud and stick them to the nest to stabilize them from strong winds. Both mate with multi partners. Colony is a strong nit unit. I have seen two males stand guard; fight off males from other colonies while couple of mating pairs where constructing their nests. Also observed that males are very sensitive to human presence when compared to the females. After about five hours of watching them, females got used to my presence and were going about doing what they do however males were sitting behind the shrubs until I moved too far off distance. Males build multiple nests since they mate with multiple partners. Females are seen laying eggs in others weaver’s nests in the same colony, hence males keep guard and allow only those females who they mate with!

I have seen common skink, garden lizards, snakes, crows attack their nests. Also seen many humans plucking an active nest with chicks. Regularly kite-flying threads are tied up in their flying zone between trees, where the weaver ends up with a broken wing, tail and sometimes their neck is stuck to these sharp threads. Every time I come across this scene, I use my pocket knife to cut them off the threads, however since I don't frequently visit this place not sure how many of these tiny winged friends are getting trapped, and also sold!

Under Wildlife (Protection) Act 1972-section 16(b)/ section 35/section 39(d)/50(b) Capturing, coursing, snaring, trapping, driving or baiting any wild or captive animal/bird and every attempt to do so is punishable. So any such cases of violation should be immediately reported to the nearest wildlife warden. If convicted, party can be punished with 3 years imprisonment or twenty thousand penalty or even both.

Knowing certain law always helps, when we share this information with localities they become more aware and such crimes can be prevented.