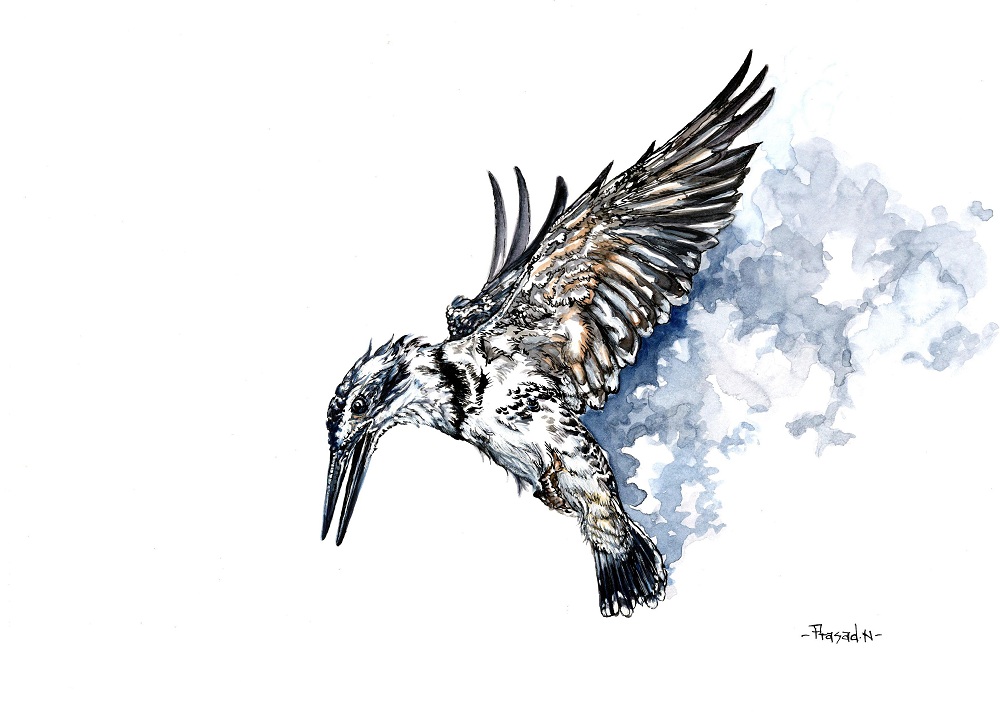 Welcome back one and all to another edition of birds of Bangalore. It is surely getting hot in Bangalore, the recent human-animal conflict has been blown to gigantic proportions. In India, like in cricket everyone is an expert in all fields, be it cooking, politics, photography or for that matter wildlife. So well, even I have my opinion. knowledge is not obtained from reading books, it comes from spending hours and hours in the field and making notes and analyzing data, also every animal and sometimes situation demands different approach. Hence we should leave it to the experts to handle such scenarios. Personally speaking, I don't have much knowledge about leopard behavior and just read through what the field experts say. In many occasions they might be right, but at a few occasions they might be wrong! Until one goes out in the field and does work with leopards I will really not know what is right or wrong. Hence I refrain from making comments about this in the social media, like the saying goes "little knowledge is dangerous".

Well, the great backyard bird count is on, I have visited my favorite birding spot and counted about 56 bird species to the list. How about you? One of the birds from that list is going to be our guest of this week. Of course he lives around lakes, waterbodies and most of the time, hovering over the water surface. Majority of his crown is colored black with streaks of white here and there, bill is long colored with black, lore is colored white, eyes are colored black, so are their iris, eyeline is colored white, ear coverts are colored black, just below the ear coverts we have a white patch, chin is also colored white. Majority of their body is colored with spots of white and black. Black ring type pattern runs through the throat, tail-tips are also with black band type pattern, while the extreme tail-tips are colored white. Males have double band across their breast and the females have a single gorget which is broken by white patches.

With the description I am sure you would have guess the bird of this week already, yes!!! it is none other than the Pied Kingfisher(Ceryle rudis). Their main diet is fish, rarely feeding on insect larvae, they hover on top of the water surface, upon finding its prey. They dive vertically into the water to catch the fish, usually they hover for about 15-20 seconds, if the prey has moved, they take a quick flight in that direction and start hovering again. They abort the dive many a times if the prey has moved too deep or moved far away. In an average 4-5 dives is what it takes for this kingfisher to catch its prey on that day. Occasionally getting the fish in the very first dive as well, however the attempts and aborted dives surely is how I derived at this average. This is one day data only and observed only single individual.

Tiny fishes get swallowed by the time they reach their favorite perch, yes, like all the other kingfishers, they also keep coming back to their favorite perch. This behavior helps them adapt well in large water-bodies. Their breeding season is from February to April, like the Common kingfisher they too dig holes on mud bank, many kingfishers build nest in the same area which gives them protection from predators. Both male and female take care of the young ones, they take turns in feeding the young ones as well. Male takes the responsibility to dig up the hole on the banks and he mates with single partner only.

Young ones face great danger in their first dive, on an average only one in three young ones will reach the adulthood. Grey herons sometimes attack these kingfishers and their young ones.

The illegal sand mining in Bangalore play major role in loss of habitat for these kingfishers, they keep digging up most of the mud and sand from the banks which fuels construction inside the city and even the outskirts of the city. Soil erosion is one the ill effects of such not so required soil grabbing. Illegal sand mining is one of the major contributor towards habitat loss for these species. They need to stopped immediately before it's too late! One way of stopping theis is by noting down their vehicle numbers and reporting it to the BBMP cell who are into wetland watch. We could also report such activities to a facebook friend called Friends of Lakes, Of course always have enough evidence, like a photograph before reporting such instances.