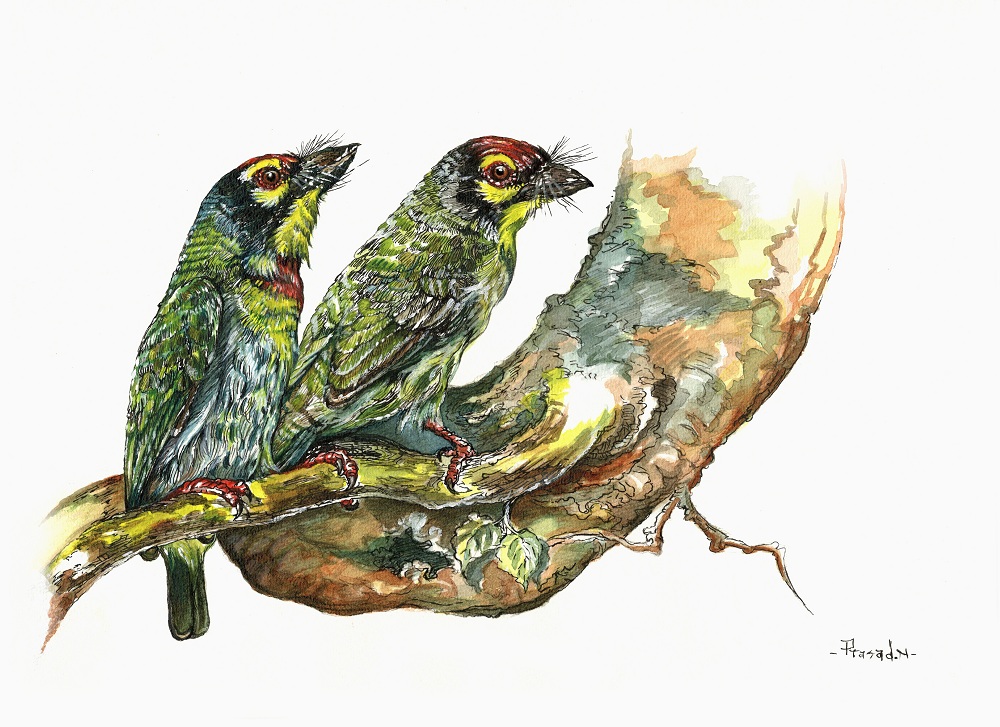 Welcome back one and all to one more edition of Birds of Bangalore. It's been a great weekend birding at Hoskote lake with group of friends. Usually, I go on my own for bird watching however occasionally group of like-minded people I would like to join with. We watched about seventy five species of birds in a matter of four and half hours and a covering about total three acres of scrubland, open grassland and wetland (Please check the ebird list here!).

While we were watching the Egrets and Grey herons on the wetland, we came across two young men, who were up to some mischievous act. One was on the bike constantly honking and raising the accelerator, the other was ready to take picture of the Egrets in flight. Upon noticing us, that person on the bike stopped it. However the other young man continued harassing the birds by throwing stones into the water. When questioned, he didn't fear, his answer was to the point "I want these birds in flight, I want flight shots". .

In the past I have come across so many instances when such encounters happened with me. I don't want name calling and turn this article into another direction! However it is disgusting to say the least to see such acts. Hope, such people grow up and enjoy nature, rather than running behind few hundred likes on the social media! We also came across a Greater cormorant electrocuted and powerlines are one of the major contributors to these bird's deaths. Though longline fishing nets, and industrial waste dumping causes more deaths. There is some positive news that keeps flashing up every now and then, stating that Hesaraghatta wetland is going to be turned to a protective reserve, hope Hoskote wetland is also turned to such a reserve someday!

We did spot the bird of this week among the seventy five species we spotted on Sunday. Their crown is crimson-red, so is their throat. Bill is black with black whiskers which extend from their black lore. Eye-line is pale yellow with crimson red eye-ring, their eye-line is followed by a grayish black, patch cheek area, brown colored eyes, with black iris, throat is also colored pale yellow, majority of their upper body part is colored military green, with lines of yellow on upper coverts, breast and lower body part is colored pale green with streaks of darker green irregular lines, feet are colored pink, talons are colored black, tail are colored dark green with yellow streaks. Both male and female looks alike, young ones dull in color and also the crimson red throat is not visible.

Well, it is none other than Coppersmith barbets(Megalaima Haemacephala), usually found in woodlands and occasionally seen around fruit plantations and not found in dry or rain forests. They are usually found in solitary or pairs or small groups; larger parties occasionally on abundantly fruiting Ficus trees. Fond of sunning themselves in the morning on bare top branches of tall trees, often flitting about to sit next to each other. Their flight is straight, with rapid flaps. They compete with other cavity nesting birds and frugivores like the White cheeked barbet. The nest holes are also used for roosting and some birds roost alone in cavities and these often roost during part of the day. Juveniles will roost with their parents but often return to roost early so as not to be prevented by the parents from entering the roost cavity.

Their call is a loud metallic tuk…tuk…tuk (or tunk), similar to that of a copper sheet being beaten, giving the bird it's name. Repeated monotonously for longer periods, starting with a subdued tuk and building up to an even volume and tempo. They are silent during winter and do not call.

They prefer fruits and fig trees are the magnets for these species. Once when we were in Sirsi, we came across Coppersmith, Malabar, White Cheeked and Brown headed barbets in a single fig tree and this has been one of my best sighting of barbet behavior in long time. Occasionally they might feed on flowers as well!

Courtship involves singing, puffing of the throat, bobbing of the head, flicking of the tail, ritual feeding and allopreening (grooming or preening the other individual). They breed throughout the year except winter. Both male and female are involved in digging up the cavity and after laying eggs, the male take care of feeding the female until the eggs hatch which is about 2 weeks approximately.

These barbets are on the menu for many birds of prey. Since we don't have many fruit bearing trees in and around Bangalore, these bird mainly depend on the vineyards and other fruit plantations. Usage of pesticides is on all time high. Near my house I have seen farmers grow separate patch of vegetable and fruits for their own consumption. When I enquired them they say that, these vegetables and fruits have worms and other tiny insects in them, if they wish to sell no one is willing to buy them. However the ones grown the majority of their land is sprinkled with pesticides day in and day out until they are ripe and ready to be sold. After watching how they grow grapes, I have completely stopped consuming grapes. I know this not the permanent solution.Organic and healthy food products will have worms and tiny bugs in them! Major killer for these barbets are pesticides, hence limited and controlled pesticide usage is one of the ways to prevent large scale deaths. Also in the long run planting fruit bearing trees in parks and along the roadside is going to keep our barbets in town!

So until next time, keep watching!