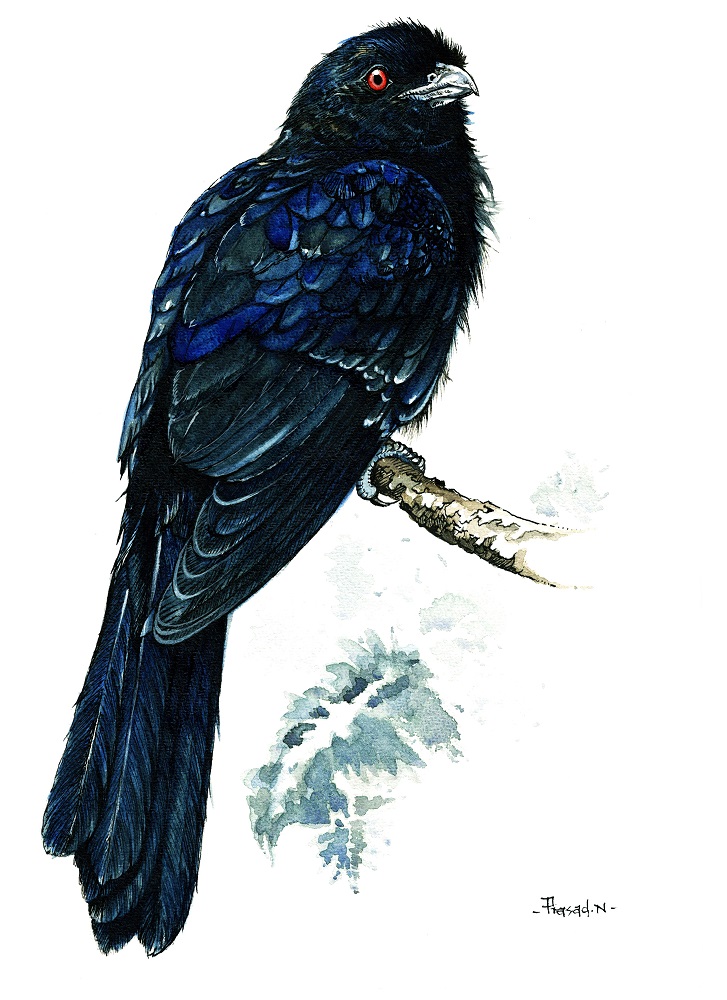 Hearty welcome to another edition of Birds of Bangalore, its been rather gloomy days whole of this week and the sun paid us few irregular visits. First and foremost, I would like to dedicate this article to my mother, coincidentally her name is also the name of a bird, the bird we are going to discuss this week. We lost her last year in the month of November due to breast cancer. November is also no-shave month all over the world, this campaign is to raise awareness about this cancer. Both men and women need to be aware about this cancer which is one of the cancers that is curable if detected at earlier stages!

When watching the Asian Koel female, close by at a House Crow nest I was able to spot a juvenile male(Eudynamys Scolopaceus) as well. Crown is black with hint of cobalt blue, on the nape there is coffee brown markings, his beak though was colored light blue like the matured male, or else juvenile have yellowish beak. Eye is cadmium red, ear-coverts colored grey, body was mixture of cobalt blue and greenish tint, juvenile has coffee brown coloration on wing-tips. White spots ran across the wing-tip which will disappear in a matured male. White spots run on the tail tips as well for a juvenile.

Based on the host bird breeding pattern Koel's adapt their breeding as well. Male Koel distracts the host bird which allows time for the female to lay eggs in the host nest. As mentioned in my previous article occasionally male have seen carrying the eggs to host nest. Male mate with multiple partners, they don't involve in feeding the young ones. Their call is Ko..el..ko..el..ko...el repetitive several calls, calls are more prominent during breeding season, off season their call is mainly to mark their territory. Their name is also derived from their call.

Adult Koel's are frugivorous, they depend upon fruit bearing trees for their survival, with deceasing green cover across our city, it is vital we plant such fruit bearing trees in our upcoming parks. Fig tree is an excellent option, it provides shelter and many species of birds feed on this fruit. Planting fancy looking trees in newly built parks is such an illogical idea.

The Ko el hoo, Ko el hoo sounds of the known,
Get lost in the Droom, droom, pomp, pomp groan,
Of the four, two flashing wheels on man made roads,
His waiting mate, waits more patiently for codes,

Hope we learn to co-exist and build parks, community, culture which are sensitive to nature and its fellow beings. With this I take leave!