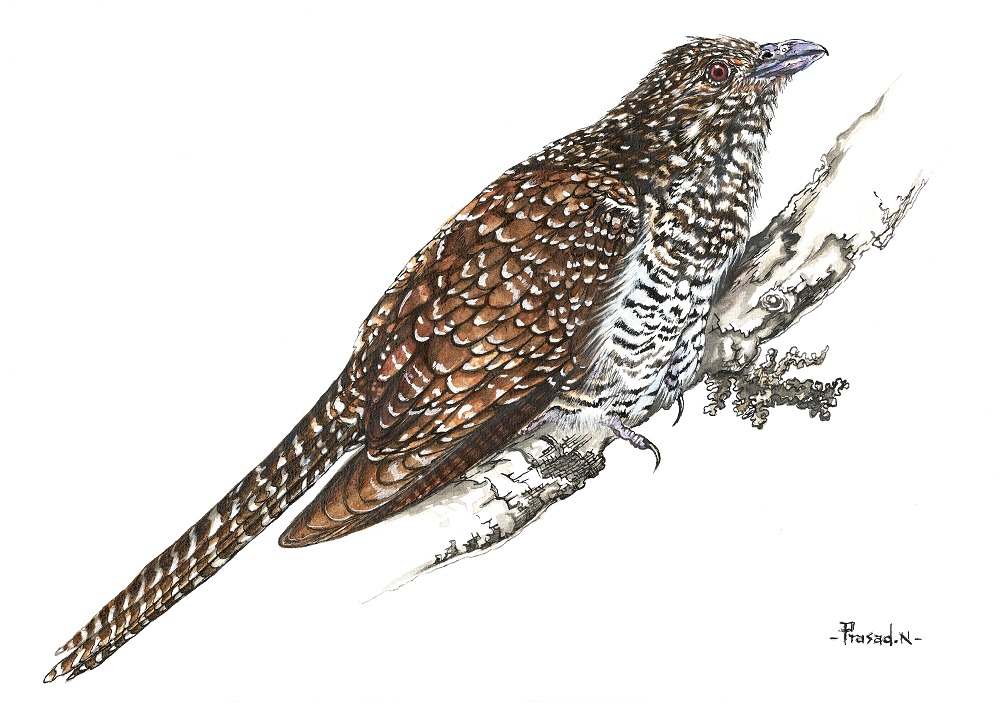 Welcome back to another edition of Birds of Bangalore, hope you all had a joyful and safe Diwali, many festive seasons are stressful times for birds and nature in overall. Everyday morning there are couple of songs from few birds I wake up to, however during few days of this festive season I didn't get to hear them. A vital part of my daily routine was gone missing and I wondered for those days how these birds would communicate with each other without chirping or singing. Could you imagine yourself not able to speak to your family due to a natural calamity, what pain, helpless and hopeless we could feel, isn't it?

Our bird of this week was also stressed by loud sound making crackers, how I knew about it? I couldn't hear them sing for about four days, no songs at dawn nor at sunset. Was hoping that they will be alright, to my relief heard them sing again during the weekend. Though this is not their breeding season, the male sings to mark his territory. By now, you could have guessed that we are discussing about a bird who sings!

You are right, we are talking about the Asian Koel(Eudynamys scolopaceus) since the female plays a equally important role in this species, we'll discuss about her in this article. She belongs to the cuckoo family, with brownish crown, streaks of white running across them, crimson red eyes, greyish beak, their shoulders, rump, wings are also colored brown, her breasts are creamish white with streaks of dark brown continues upto underparts, long tail has huge stripes of brown with rufous lines, tarsus and legs are colored grey.

Her diet is mainly fruits, given opportunity she will feed on insects, eggs of other birds and garden lizards. Their breeding season is highly influenced by the breeding season of common crows, why you may ask? Well she lays her eggs in other birds nests, the male koel distracts the nesting bird from their nests, then the female either feeds or pushes out the existing eggs and lays her eggs. It has been observed that sometimes the male carries the koel eggs to the crows nests or other birds nests.

Young ones mimick the call of crows, they also resemble crows, when crows are away female koel feeds her young ones. When they reach 3-4 weeks, young ones are ready to take flight, either they are chased out by the crows or fly away on their own. Young ones resemble the male koel for about 1 and half month and then the white patterns appear on the body for the females. They compete for space with Common Myna, Common House Crow, Southern Coucal, etc. Black kites in urban setup and other birds of prey fancy the koel in their diet.

Since adults mainly feed on fruits, fruit bearing trees are vital for them. Apart from the parks, few huge bungalows who have fruit bearing trees, the number of such trees are constantly declining. Which is a worrying sign for all the birds depending on fruits. During their breeding season due to heavy traffic, there is unbearable noise pollution, they cannot communicate during the day, hence have adapted to call during odd times affecting their normal behavior. This also means less time during the day for mating, there are many unseen and unnoticed ill affects of increasing noise pollution. Many song birds have changed their pattern and timing of their calls. During any celebration the huge loud speakers not only disturb the birds, it is inconvenience to people as well. I strongly feel any form of entertain should be without disturbing the other person around!

Koel has inspired many poets and has great influence in literature, their calls are so pleasing to the ear and its assumed that their constant breeding calls marks the arrival of Vasantha Ritu. Even I have penned few poems on the Koel. As young kids many of us would have heard them sing, we would have also tried mimick them. Hope we save these wonders of nature of future generations, hope they will go outdoors and enjoy these marvels like we do today! With this I take leave!