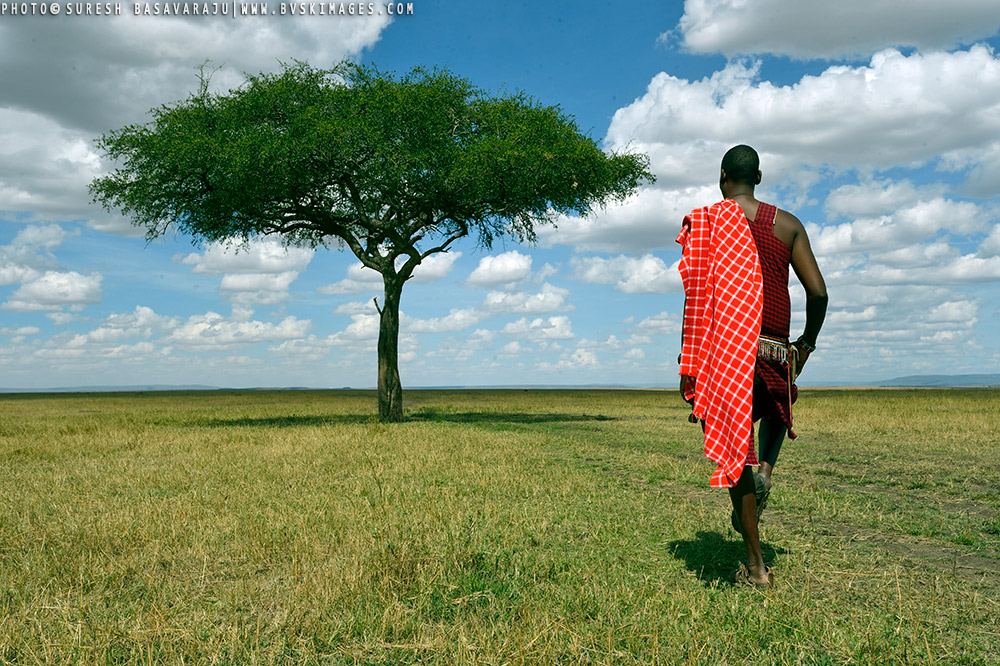 You visit a new place, you don't have an idea about which way to go, where the best sightings happen, what is the best time. Let's face it, you need help and here comes a person who most of the times would be a local who has spent considerable time in the area, is knowledgeable about the wildlife, and knows where a particular species can be found. We need a person who can guide us through the jungle to meet our goal. What we need is a guide. I would be using the term guide instead of the now often used term of naturalist. While there is a clear distinction of what a naturalist is and does, the common consensus is of course that this person undergoes some sort of formal training in identifying flora and fauna, is knowledgeable about their whereabouts and is good at reading the signs of the forest.

The guide I am talking about may or may not be a naturalist but one thing separates him/her from the average guide or the average naturalist and that is the ability to understand your needs and direct their efforts in that direction. This means that they need to connect with the customer and make sure their goals are achieved. Lets call this entity guide++. No marks for guessing my profession.

People venture into the african plains with many different goals, for some it is a vacation and the primary concern is to relax and have a good time, for some it is the place with all it's glory that they want to experience including people, architecture, history. Within the photographer community itself there are many different goals. Some enjoy watching the wildlife with a binoculars and document their experiences with a small point&shoot camera, Some are bird watchers for whom spotting the number and variety of species is itself a goal. For some rare and action shots are a key and for some making something out of the ordinary is the goal. 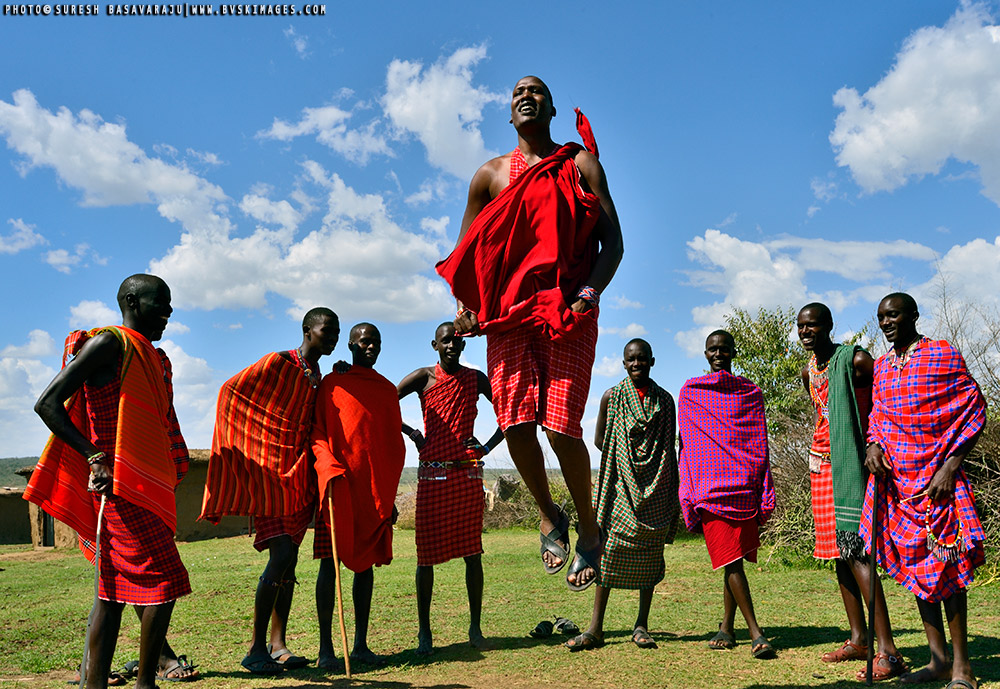 In my African journey, I was lucky to have such a guide++ in my first trip itself. Simon Kararei, Maasai warrior, a sliver medalist guide, an exceptional naturalist, and blessed with a keen sense of photography. The eight days we spent were very rewarding with Simon leading the way from dawn to dusk.

As with all things in life, you don't realise their value till you don't have them, During this year's trip we could not get Simon. The rides in the mara were the same but things were not falling in place. Anyway I had written to Simon before the trip and we were to catch up for dinner at the camp. During the dinner, I mentioned how this year was not the same and he offered to guide us for two days out of our eight days. Next morning, he was our guide and magic started, a leopard with a very young cub, another one with a sub-adult, lions hunting, cheetah hunts, magical sunrise and sunset images. It was a blast and the four friends with whom I was travelling could tell the difference between a guide and guide++.

So what goes into making of a guide++, apart from some commonalities like knowing the local landscape, the way of the animals, reading the tracks, and in general knowing the way around the 1500+ square kms of the Maasai Mara. I guess it is the same thing that makes one employee's performance better than others, one sportsman's record better than the rest, one artists work way ahead of others. That, I believe is passion. Treat any task as a chore that needs to be completed and results will not be so spectacular. Start with a passion the burns and wonders happen. 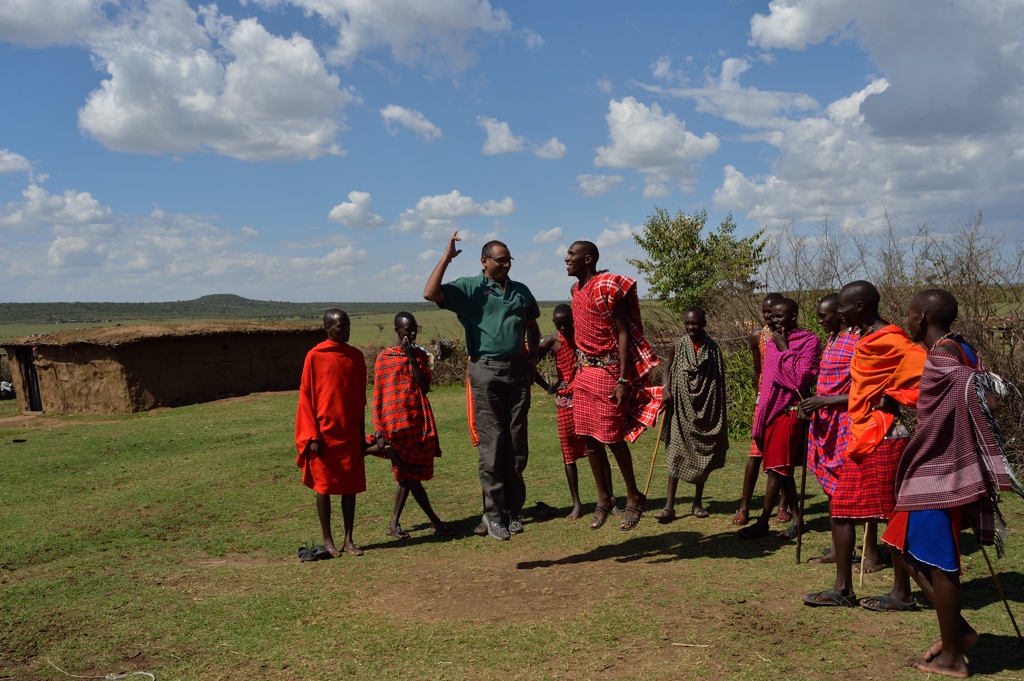 Coming back to Simon, I would give out a list of the things I wished to see and as the day progressed I would forget about it but he would continue with my wish list and towards the end of the trip, I would be sure to have a sighting at least. In wildlife photography, lot of parameters are outside your control and many a times one does not make the image one sets out to accomplish. The difference is the enthusiasm that a guide++ puts in to make a sighting is a reward itself. You end up enjoying the journey more than the destination itself.

One such request from my side was to visit a Maasai Village, Simon arranged for a visit to a village which was not the usual tourist spot. He knew I wanted the experience without the average tourist ready village.

The other instant where his passion and the enthusiasm was the key in having an experience of a lifetime is the one where we came across a lioness walking in the open in early morning.

Simon manoeuvred the vehicle so that we could get some front head on shots. While we were busy clicking, he was not sitting ideal. He sensed the lioness was not on a morning walk, about 200 meters away there was a bush buck in the thicket which was what the lioness was after. He whispered she is stalking the buck and asked us to be ready. At this time the lioness was still walking and no visible stalking behaviour was observed, yet Simon had judged the scene accurately. The lioness did stalk the buck which by now also had sensed the lioness and moved away.

We were disappointed at the failed hunt and continued with our clicking. Now another lioness was walking down and beyond it a male lion was walking down the path, once again the vehicle was manoeuvred into position, I shifted to monochrome to make some dramatic images of the male lion. Once again Simon was on the lookout and he spotted the first lioness move away and saw a warthog in the distance. He whispered that the target is "Phumba" the warthog and positioned our vehicle to get a unhindered view of the scene. Once again right he was, the first lioness started the chase, the lion stood on a small mound visible and cutting off the path of the warthog. The second lioness was behind a clump of bushes, as the first lioness herded the warthog towards the second one, she leaped out and cornered the warthog finishing the chase in a successful hunt.

The images though ordinary, were moments that gave us a glimpse of the daily play between the hunter and the prey. A scene which we could have easily missed had we not got a guide++ with us. A scene witnessed in documentaries many times but the two dimensional screen does no justice to being in the midst of the chase and witnessing it with your own eyes.

About the title image, simon standing in a front of a acacia tree in a classical herdsman pose. It is a cliche but then I wanted the shot to document the Maasai warrior and the acacia tree. The exposure was a "sunny f/16 rule" . i.e. 1/ISO at f/16 for a sunlit scene. slight underexposure of 1/3 stop to bring out the saturation in the image. I usually dial a compensation, its an old habit from the film days when slight underexposure brought out the colours and saturation especially in slide films. 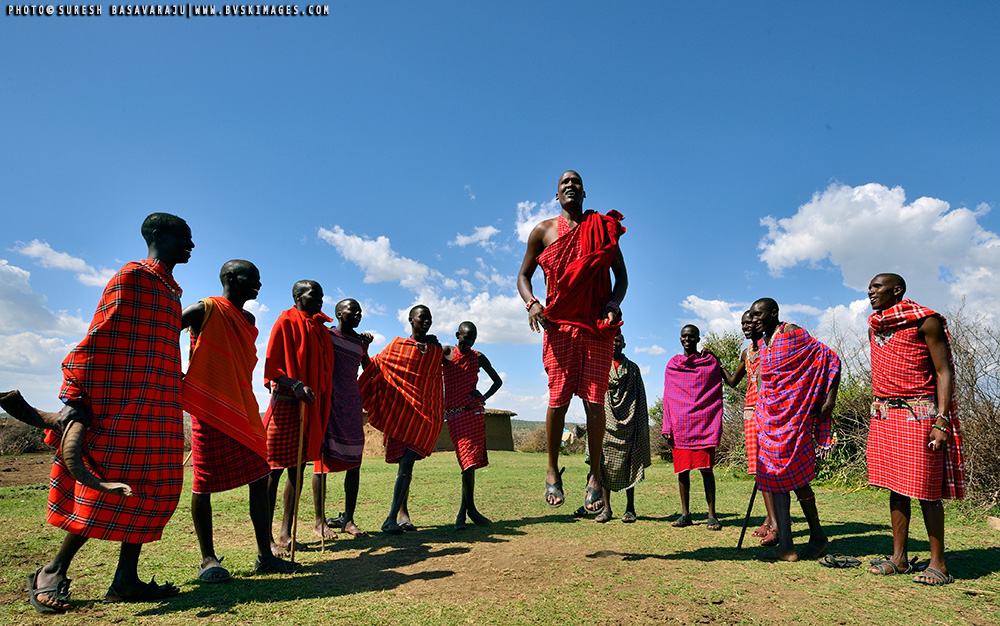