In nature, predator-prey dynamics is always breathtaking to witness, be it a tiger bringing down a sambar deer or a gaur or a pack of wild dogs chasing down their prey. On a smaller scale, a jumping spider stealthily stalking its prey, or a snake snapping up its prey with lightning fast strike. All these are true adrenaline pumping moments. Moments which get etched in the viewer’s mind and stay on for a long time. Though these are daily and routine events in nature, they are not commonly witnessed. And when one such opportunity comes by, it is nothing short of a thrill.

Recently, I witnessed one such incident, hunt by a Green Vine Snake. 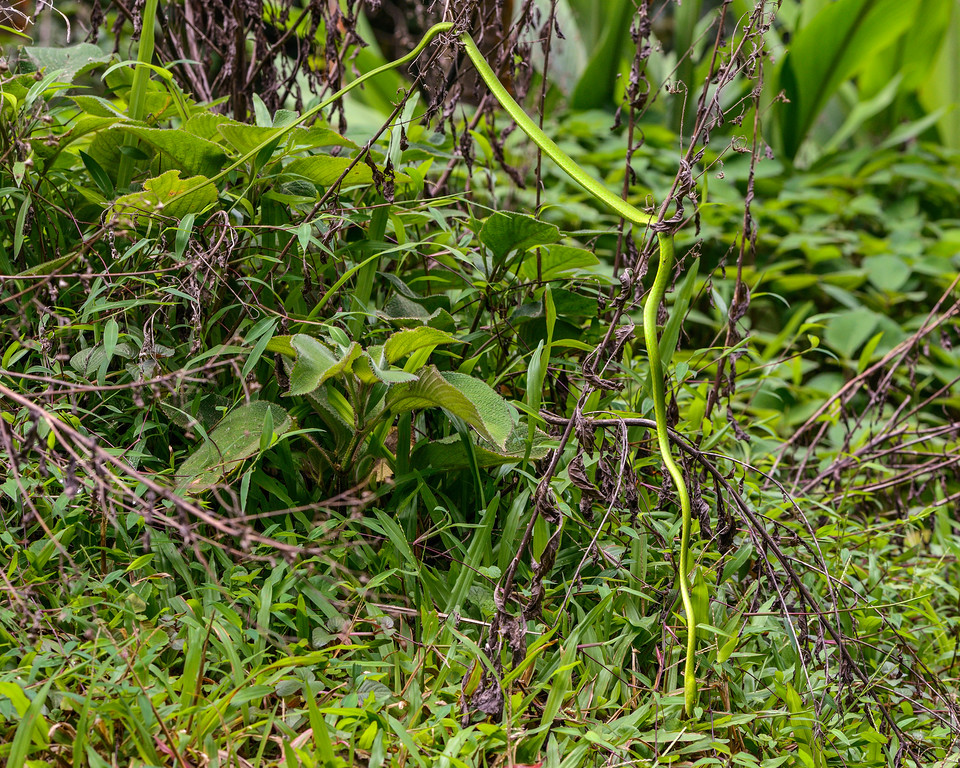 The time was around 11 during the day, rather warm for a monsoon morning. We found the snake stretched to its full length, its body very delicately supported at different points by thin twigs. The upper half of its body was bent down and eyes were focused on something amidst the plants on the ground below. Looking at the way the snake's eyes were riveted, we were sure that it had seen something on the ground, may be a frog or a skink. The green vine snake being diurnal (active during the day), there was a high possibility that it was looking for a meal.

Keeping a safe distance, we settled down to observe. The snake seemed to be lowering itself down, trying to get closer to the ground. It was doing this with a very subtle and slow approach. It was using the breeze to its advantage. It lay absolutely still when there was no breeze and moved only with it. We were discussing that this is a strategy used by the green vine snake to avoid detection and not give away its position. A combination of this strategy and its perfect camouflage rendered the snake completely invisible.

Having gotten close enough to the ground, but still hanging down from the shrub, the snake stayed in that position, absolutely motionless, for nearly a couple of hours. We knew that it was about to hunt, but could not assess the timing. So we went around photographing other subjects nearby, not venturing too far, just in case if something did transpire. After a while, Udith, one among the group, called out that the snake had caught something.

I rushed to the place to see if it had picked up a little frog from the growth below and my prediction came true! 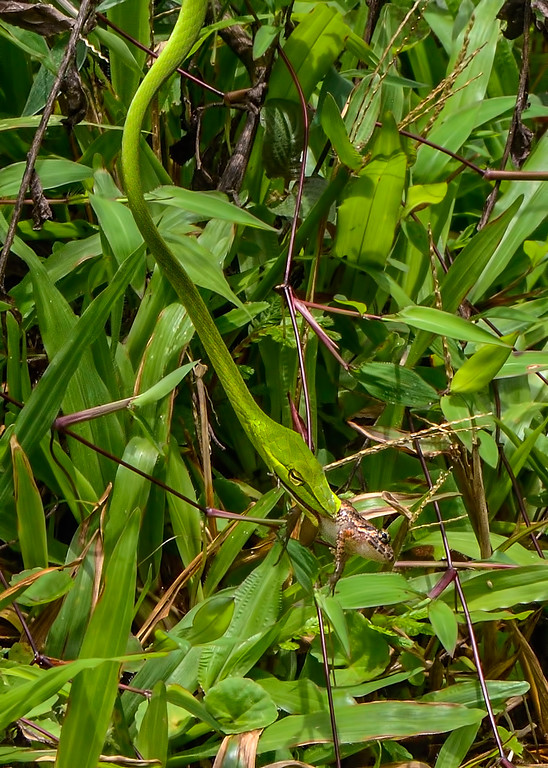 I was equally amazed at the fact that the tiny frog stayed put for all this time, completely oblivious of the impending danger. The strategy of the snake was successful indeed. Hunting is definitely an exigent skill and predators in nature learn and fine tune this skill over a long period of time. 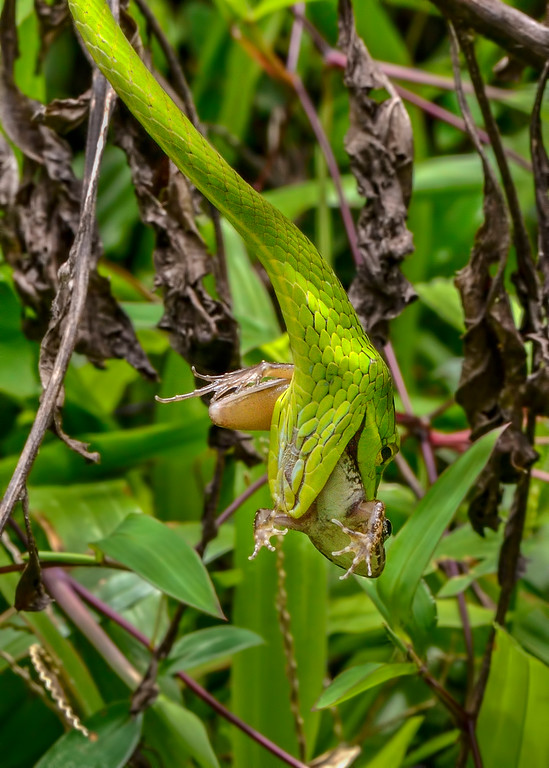 In order to get a proper grip on the frog, the snake started widening its jaw, stretching the surrounding muscles. The scales on its mouth started to move away with the skin stretching, making the jaws flexible. 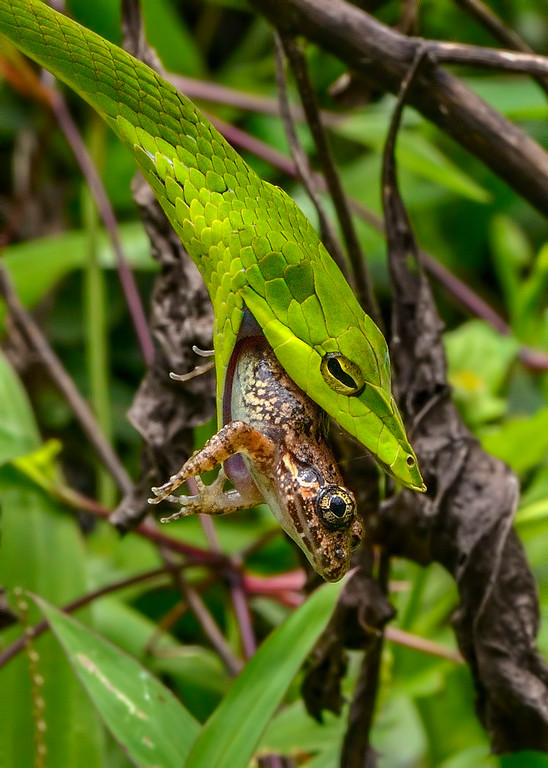 The snake slowly began moving its wide open upper and lower jaws over the body of the frog, like rolling over it and pushing the frog further inside. 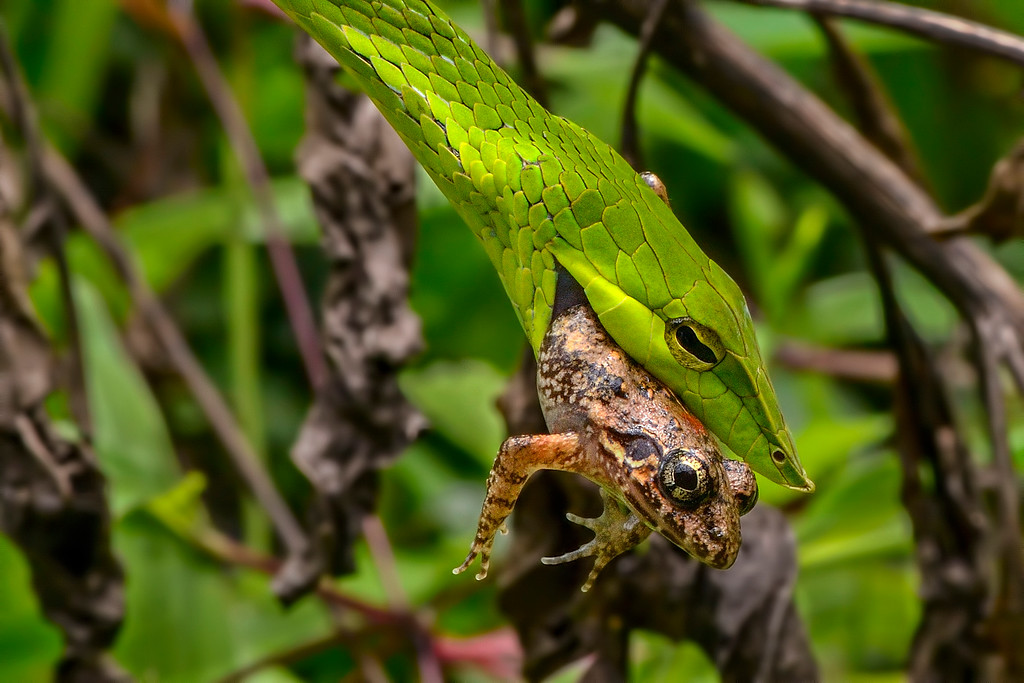 A low and fading distress sound came from the frog. But it had no way out, life was trapped in the jaws of a serpent. 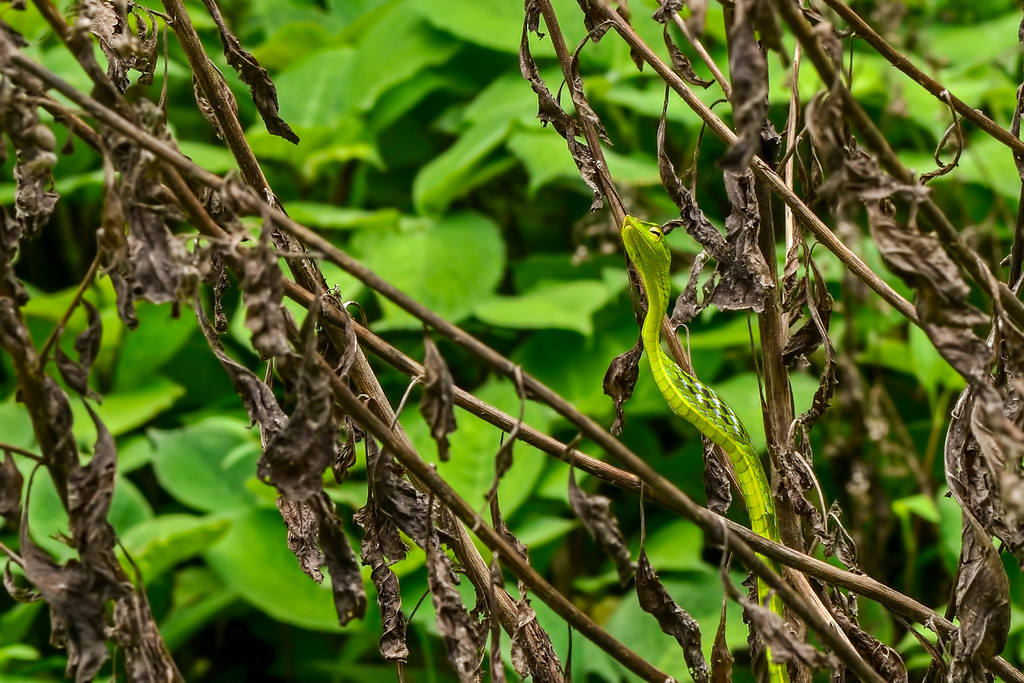 With the frog down its throat, it was a quick satisfying meal. The snake then clambered up the shrub and settled itself down for a nice little siesta.