I catapulted from my sleeping bag fearing I had overslept. 2AM, the watch read and it was the third time I had woken up that night with the same fear.

"Tomorrow morning, get ready by 5.30. It takes about 45mins to reach the spot. And once in the hide, from one wall you can watch the Western Parotia dance and from the other, the Bowerbird readying its house for a party. You might have a tough time choosing whom to photograph!" Zeth had portrayed the previous evening. After all, this was the day I had been dreaming about for several years, but a day which I had not expected to arrive this early. And when the moment was just a few hours away, the last thing I wanted was to sleep through it.

5AM- I had already woken up a couple more times.

By 5.40, three of us we were on our way, Zeth leading the way and Augasthanese helping me with my tripod. It was a steep climb and the 7kg camera bag was not helping. I would stop every 10mins gasping for breath. "Hurry up, the Parotia might already be calling for his mate", Zeth warned as the first rays of the day pierced through the rainforest. As we approached the 'stage', a cacophony of shrill calls filled the air. It was that of the Western Parotia, one of the endemic Birds of Paradise of the Vogelkop region, to which the Arfaks belong. The excitement was palpable. The moment of truth was finally arriving. Or, so I thought.

Finally there we were, in front of the hide. Just as Zeth had portrayed, the Parotia display area was to the left of the hide and straight ahead was this incredible Bower. The calls were lost in the canopy with no sight of the birds. Without wasting any time, I got into the hide. Zeth and Augasthanese had to return and left the hide for myself. The hide was a 10ft x 4ft x 5ft(??) structure camouflaged by fern leaves. The only thing missing now, the reason why I was here, were the birds.

I was gaping in awe at the Bower, a cone shaped hut-like structure with a front lawn meticulously cleaned of any debris and decorated with an assortment of colourful objects- flowers, fruits, fungi, plastic wrappers, bottles and any other conspicuous object that adds colour- all so artistically arranged. And all this, the work of a single bird, much smaller than a Myna! To quote Sir David Attenborough, the Bower bird is without doubt "Nature's Great Seducer." 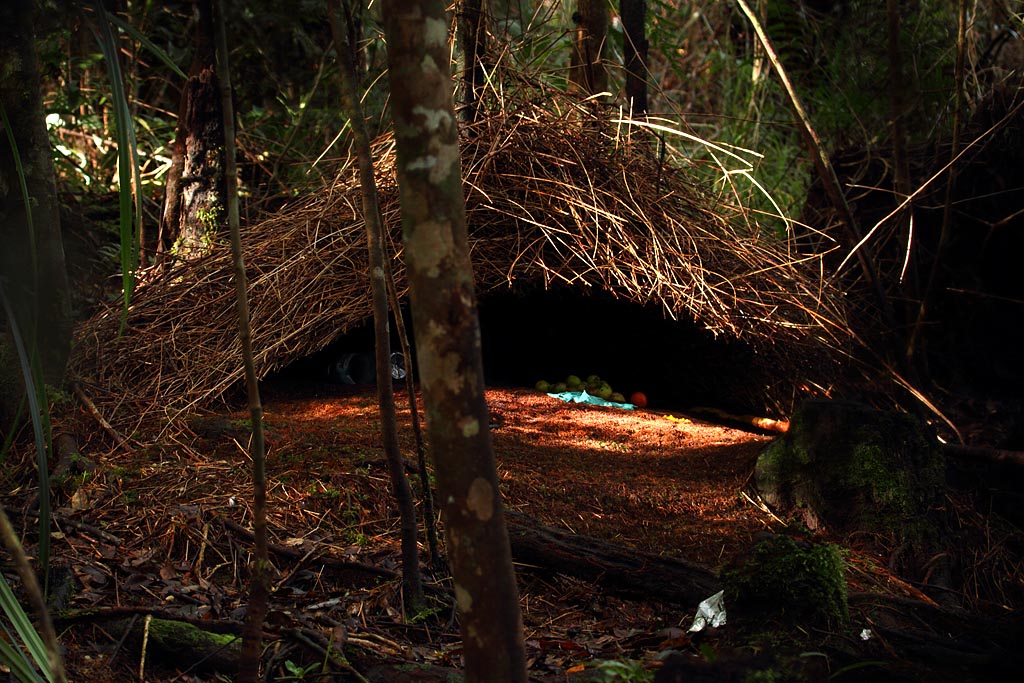 The Bower meticulously plans the area, such that there is sunlight every morning on its lawn.

An hour passed. I could hear some calls teasingly close but no sight of them. Two hours gone by. Neither of them had made an appearance yet. Restlessness and boredom set in. The sleepless night started taking a toll. Never before had I sat so idle at one spot without moving more than a few inches.

Just as I was contemplating getting out of the hide to get a breath of fresh air, there it was. The Bowerbird, the mastermind behind one of the wonders of the natural world, just popped into the frame. Frantically I aimed the camera towards the bird and watched the action unfold through the viewfinder. 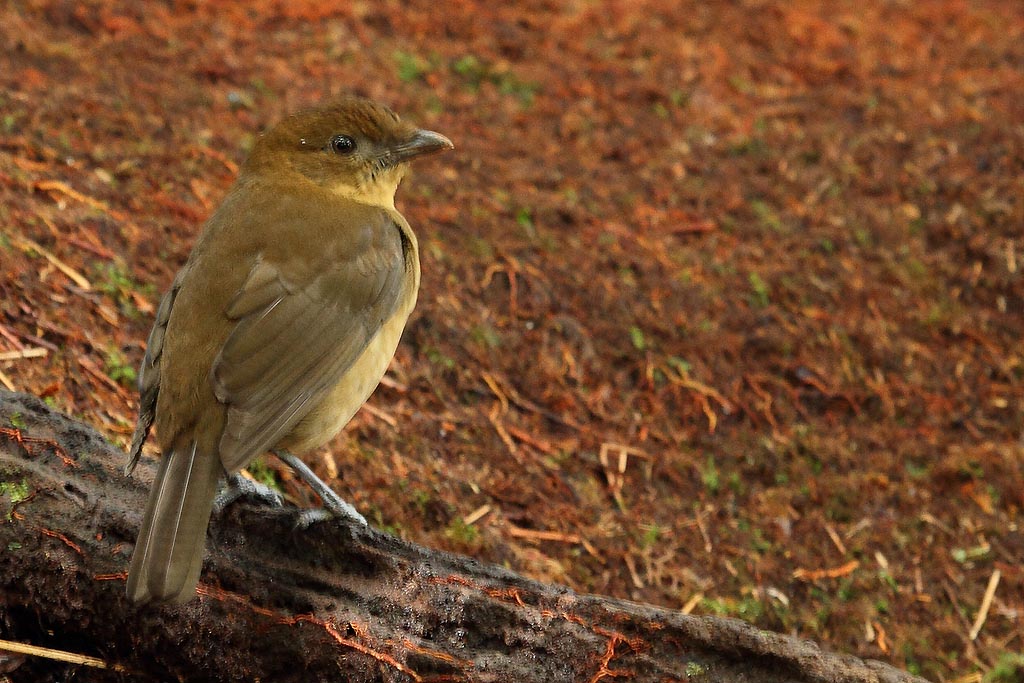 The only decent portrait I could manage.

He would look around, clear a few unwanted leaves from his garden, set right a few straws from the Bower, look around again for any signs of a mate, disappointed he would go about rearranging his 'garden' again. The light was too low, even at 3200 ISO I could only manage a shutter speed less than 1/60. To make things worse, the bird was constantly hopping around. A few record shots later, I decided to put aside the camera and just enjoy the action. 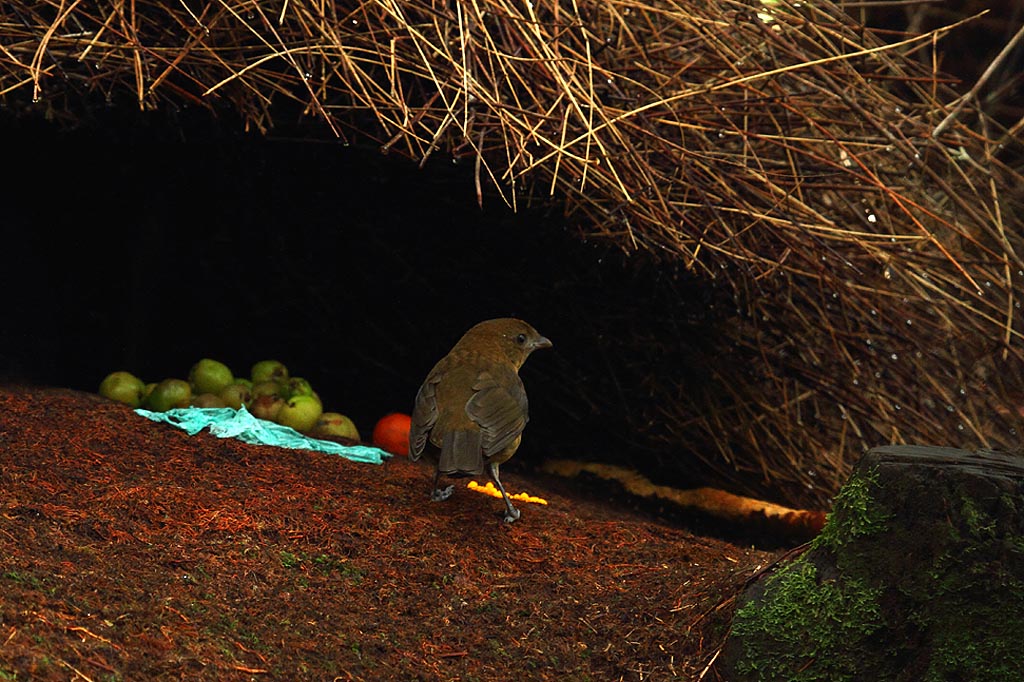 And then the unexpected happened. Without a warning he sprung at the hollow of the hide. I was taken aback, literally. I just sat still with shock. I did not want to scare the bird away. He was hardly a few inches from my face, probably analyzing the threat levels I posed. In those few seconds, I took a good look at him. Pallid, olive-brown in colour, he was devoid of any extraordinary plumage. This is the land of exuberant, colourful birds, yet he stood out. Looks did not matter, for his bower did the trick. He was legendary at his work!

Back at the bower, he would patiently examine his setup for any glitches. He might have spent months to build what he thought was a perfect bower but the expectations of the females are sky high! All that is needed for the female to reject the male and his bower are a few misplaced straws or badly co-ordinated colours. Life is not easy for him. Sounds familiar? It is the story of our lives too :)

A minute later, he was gone. Brilliant mimics that the Bower birds are, I could hear him close by, imitating the display sounds of the Superb Bird of Paradise. I could only wish for him to return but he would not.

The Parotia had given me a slip that day (whether I saw him or not is another story for another day) and we decided to go and look for other Bowers in the vicinity. We found 3 more Bowers of varying size and assortment of ingredients with which the nests were decorated. 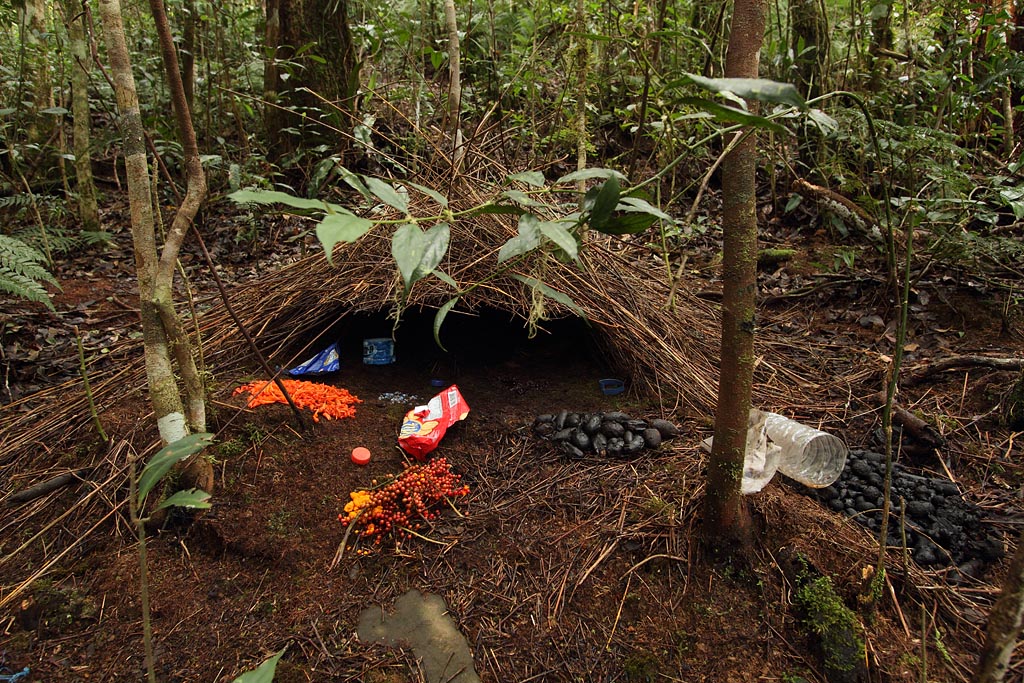 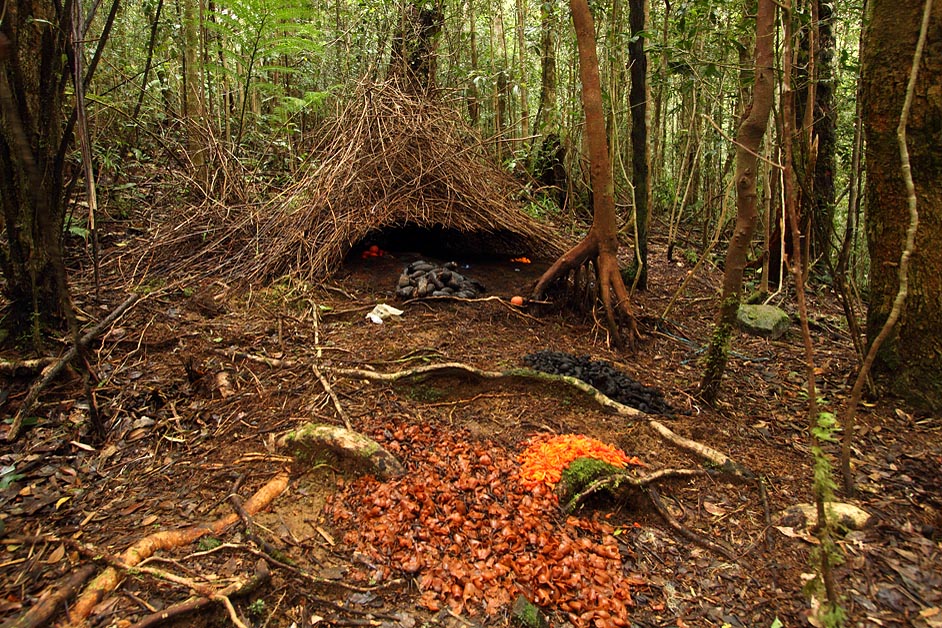 And an interesting thing to note is younger the bird, smaller the bower gets! 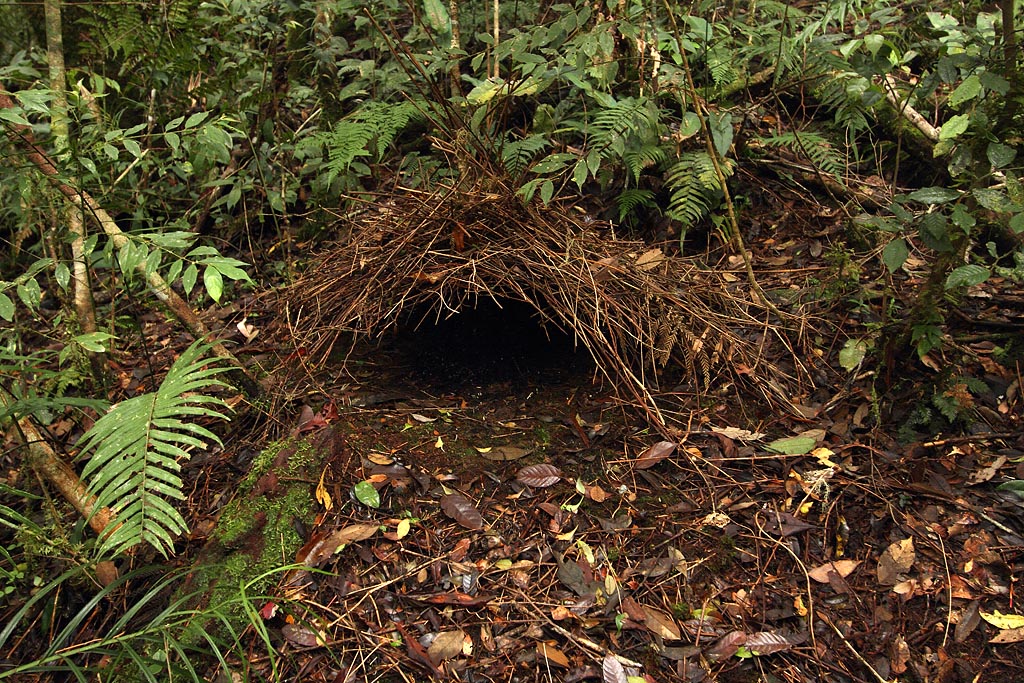 We came across a site where the Bowerbird had dismantled his entire bower and was preparing to build it afresh. The straws were scattered all around. The moss around the central column was still present. He had probably gone looking for some construction material and he could be back anytime. But it was post noon, and the afternoon showers had begun. We had to leave.

The following morning when we returned to the first bower, we found a new entry into his garden. A 330ml Coke tin! How they manage to find and carry all these to the nests, I wonder! 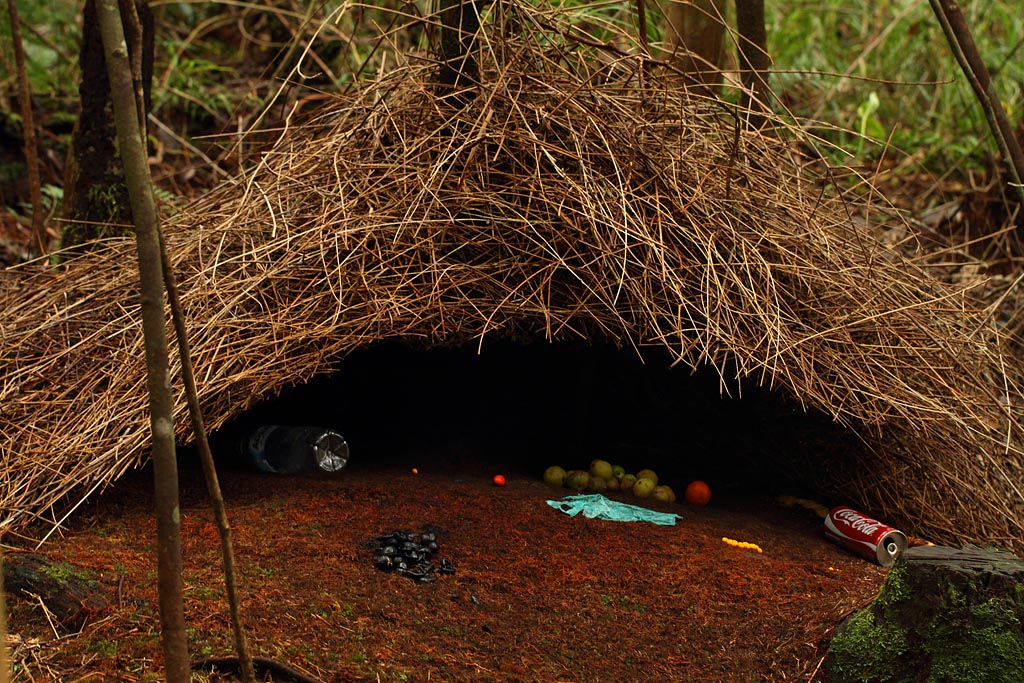 And for a perspective of the size of the bower, here is Zeth who is around 5.6 ft. 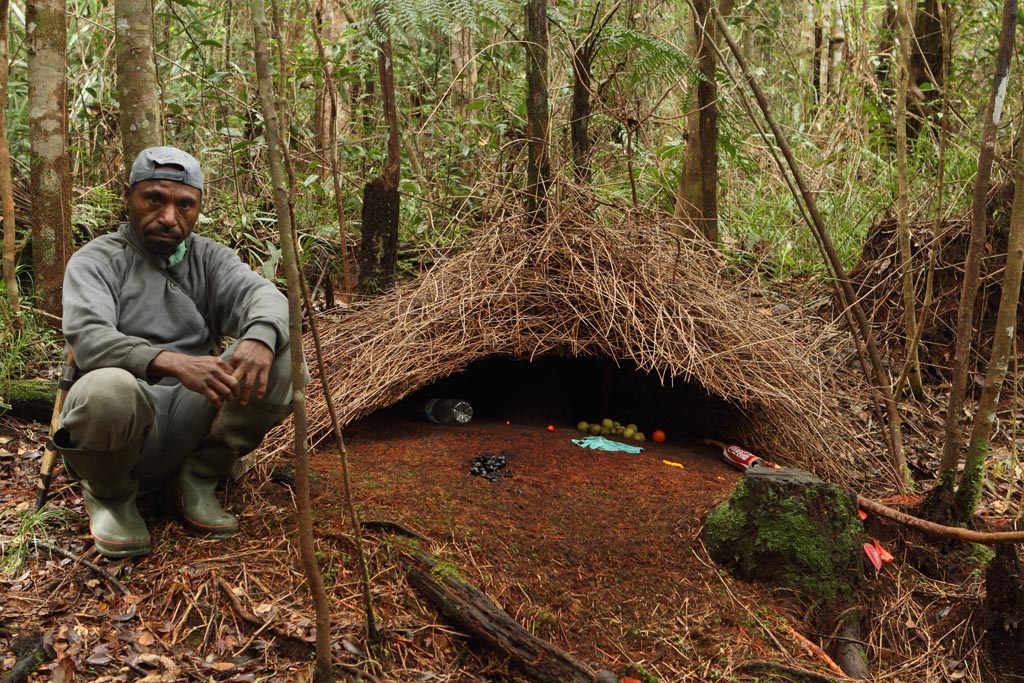 It was the display of the Parotia that I came here to witness, but for now it was the Bowerbird that had completely bowled me over.

PS: Thanks Radha Rangarajan for helping me put my thoughts into words :)