It is always great to visit a Tiger reserve and go on safaris, be it in the north, south or east India. Be it hot summers, wet monsoons or cold winters!

An elusive glowing yellow with black striped animal has captured imaginations of many and inspired many more-The Tiger. An ambition of spotting this golden beauty in the wild took a bunch of likeminded people to Bandipur.

Our destination was none other than our very own Bandipur Tiger Reserve. We went on six safaris in a span of two days and it turned out to be a rewarding experience. By the end of it, I wished to spend a few more days at Bandipur, just for the pleasant weather and peace of mind.

As soon as we reached the reserve, we were greeted with several Bonnet Macaques, it is great to watch them immersed in their daily activities. Feeding such wild animals is not a good practice, though the warning message always specifies this guideline, most of the tourists end up feeding them. Bonnet Macaques are also great subjects to photograph and soft back light adds an appealing outlook to them. 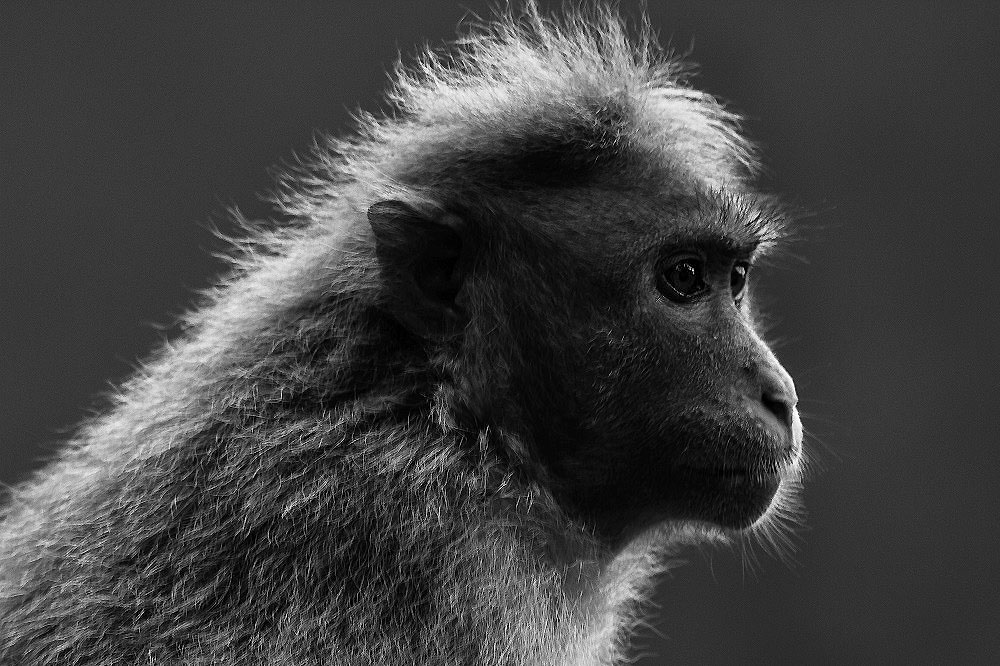 Sparrows can be found in plenty at the canteen area, building their nests and picking leftovers. Sparrows evoke nostalgia if you have grown up in Bangalore, they certainly remind me of my childhood when I used to feed them from the balcony of my house. 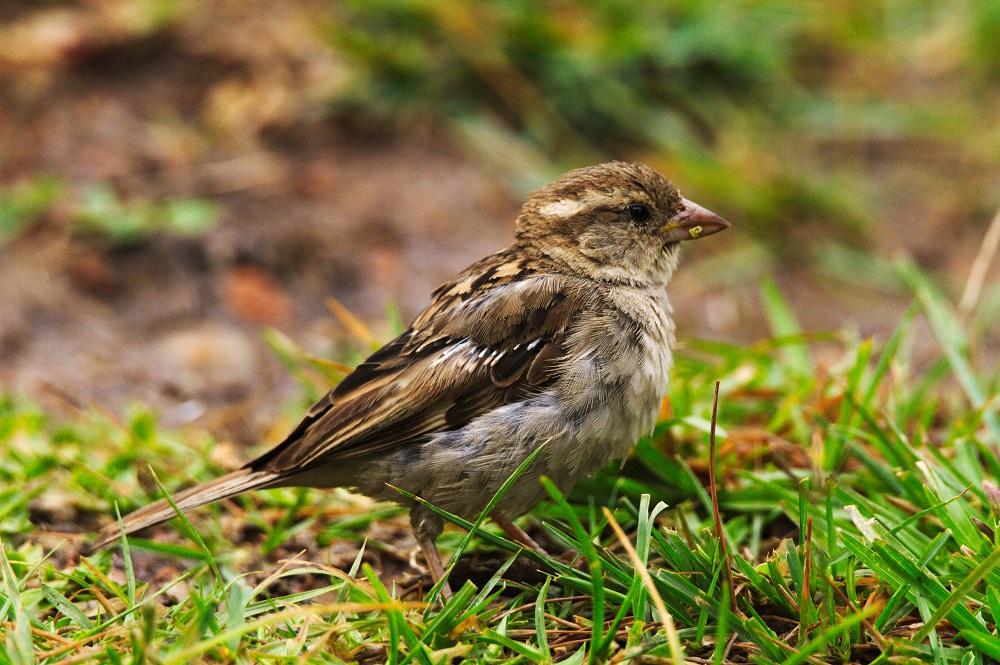 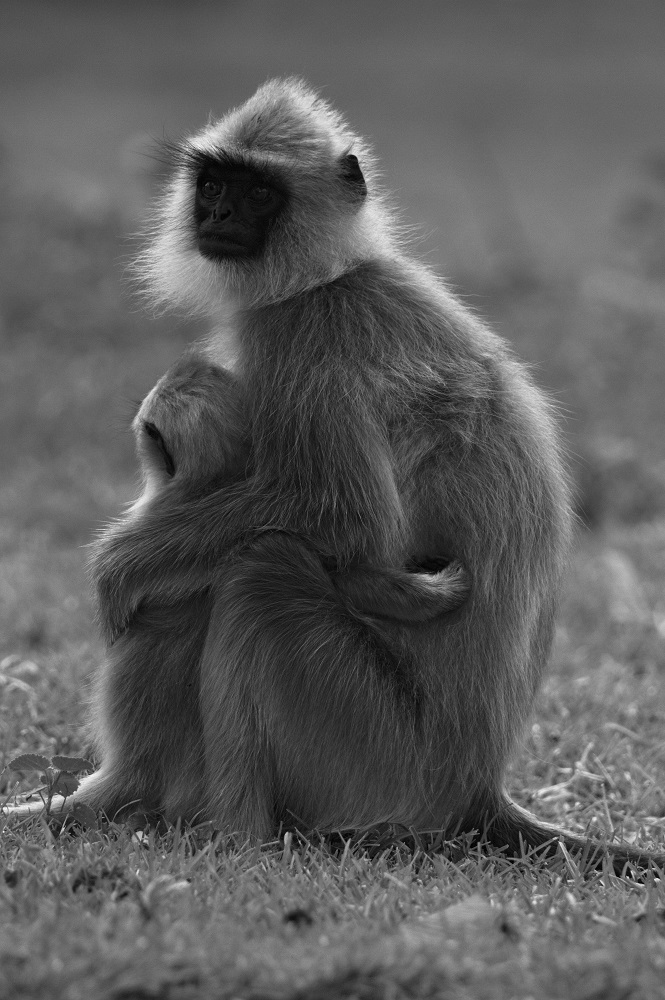 The rain gods showered their blessings on all of us, the beauty of the place increased double fold due to the peafowl . These calm, dramatic and peaceful moments reminded me of great poet Kalidasa's words; 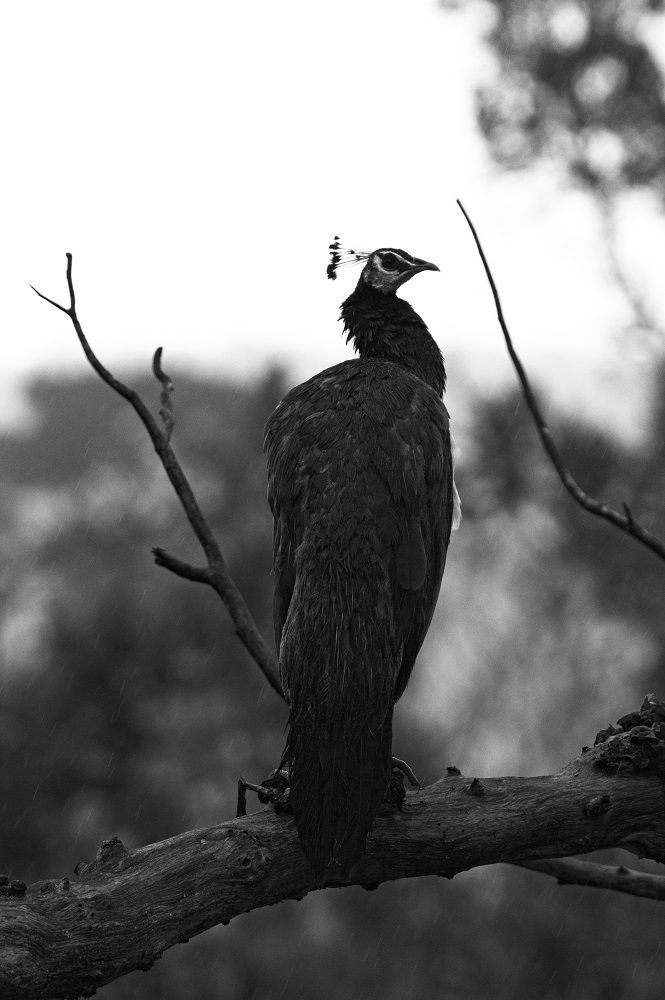 “Bright as a heap of flashing gems, there shines Before thee on the ant-hill, Indra's bow; Matched with that dazzling rainbow's glittering lines, Thysombre form shall find its beauties grow, Like the dark herdsman Vishnu, with peacock-plumes aglow”

Later, a herd of Indian Gaurs walked across in the rain, what more does one need? The Bandipur forest, peafowl, rain and Indian Gaurs; all at one place, we were immersed in happiness. 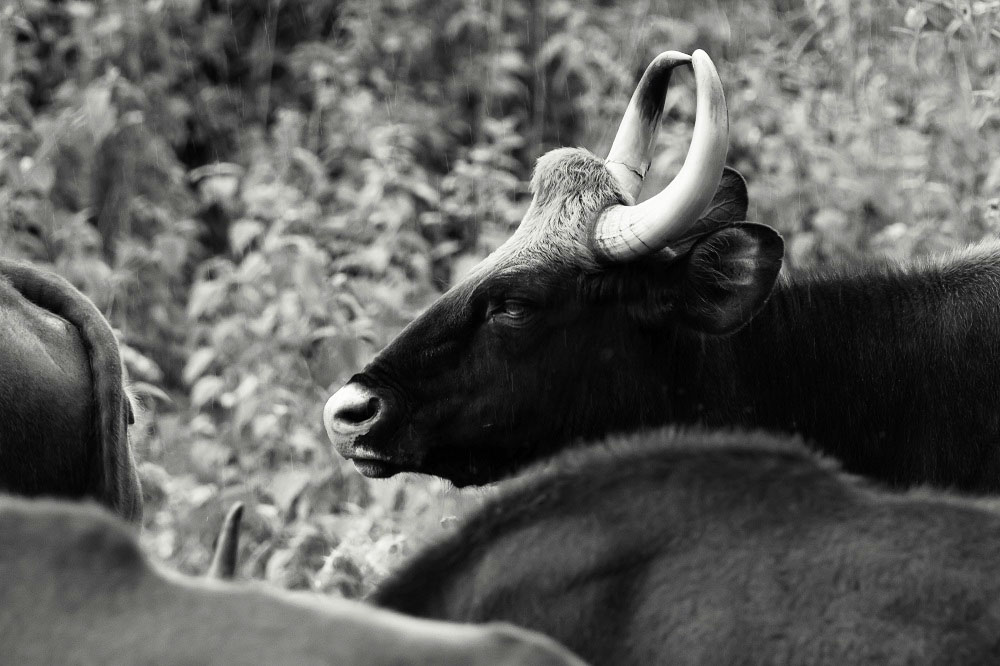 As soon as the rain reduced, the sun was out in the sky, shining its bright light on us. We were just recovering from the sightings when two stripe-necked mongoose walked out into the open. They were biting each other, moving up and down on each other with their neck and for a brief time they were mating. This was such a wonderful natural history moment, it was a golden opportunity to document mating behavior displayed by the mongoose. Animal sightings fascinate us, but imagine watching how they interact with each other, this was an unexpected insight into their life and we were thrilled beyond measure. 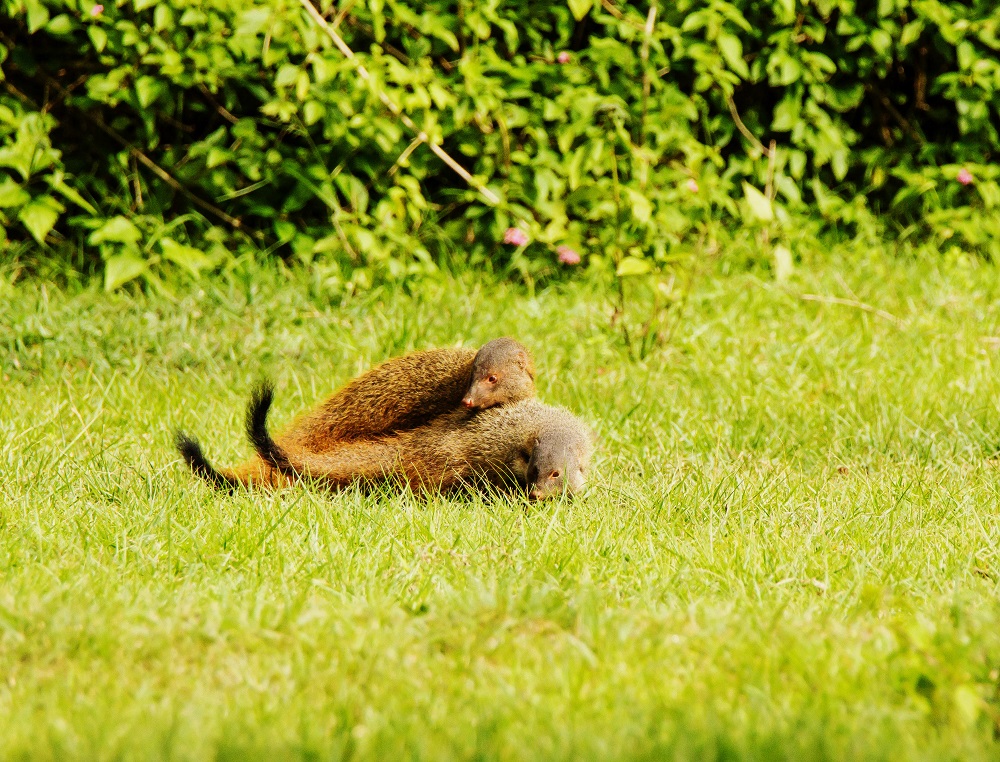 The gentle giant-an Asian elephant paid us a visit with a jungle Myna perched on its back, it is amazing how animals of such varied size class co-exist in nature. 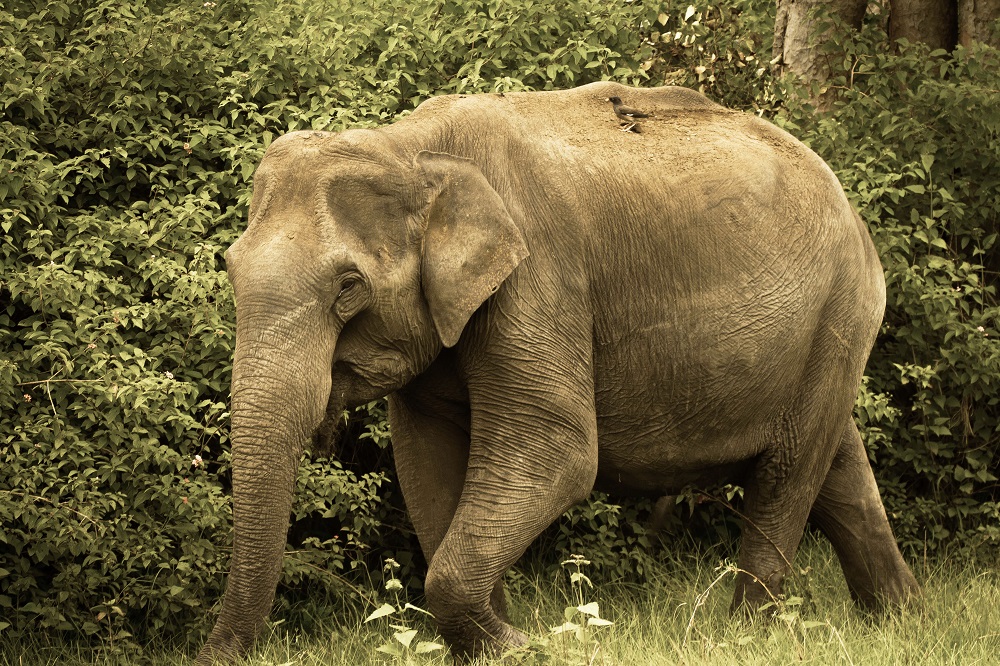 We started to explore the forest and noticed two Spotted deer stags (males) involved in a territorial fight. 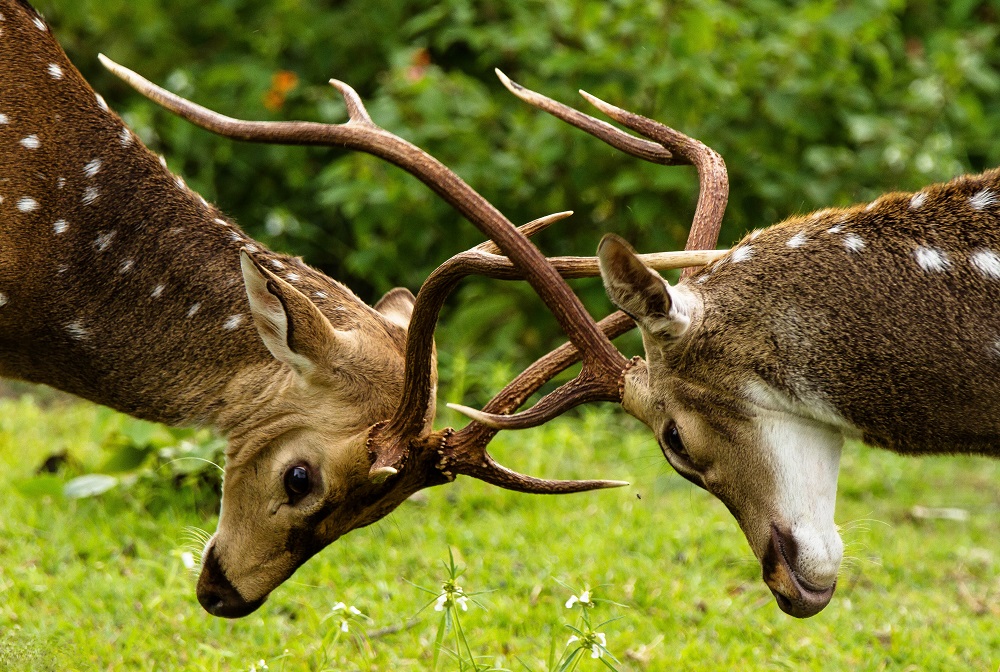 Green Bee-eaters were also busy, they began feasting on insects right after the showers.

A red wattle lapwing chick was a charming sighting we witnessed in our safari. Her mother was around, she made a quick dash toward the chick and they both slowly disappeared into the green. 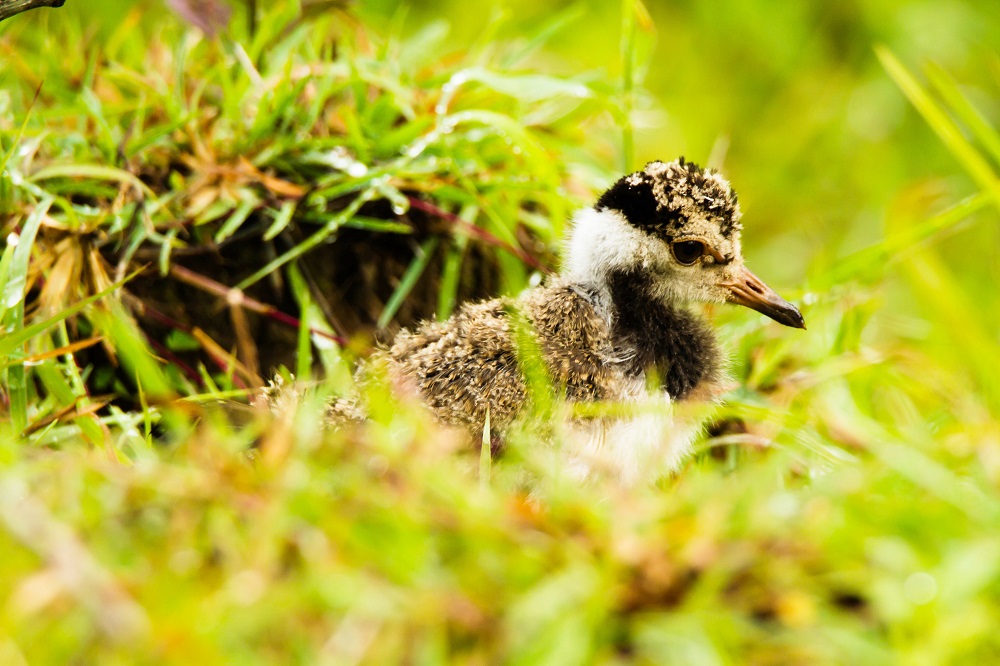 So did our hope of spotting that elusive cat. Our energy level did not deteriorate, because there's always next time. It was a truly exhilarating experience in the forest, with rains and interesting animals all around.