About two years back, I grabbed the opportunity of visiting Amboli. Amboli is a truly fantastic, serene, laid back little hill station nestled in the Sahyadri hills. Being a part of the Northern Western Ghats, it is quite expectedly, rich in Biodiversity.

While we were there, I came across a number of shed exoskeletons of Cicadas. They seemed to be everywhere, as though it was their molting season. Many of the Cicada nymphs appeared to have emerged from their underground abode to shed their skin and enter into adult life. The dream of wanting to witness one such event kept crossing my mind. I knew it would be a tough one to spot, but I never realized I would see one that very day!

Late in the evening, I noticed a Cicada nymph settled down on a small plant very close to my cottage. It was still for a while, so I suspected that it could be up to something. May be getting ready for a molt. Hence, I waited there, but there was still no movement. Temporarily giving up on my dream, I left it at peace.

An hour or so later, I came back and saw that the Cicada had started molting. It’s old outer covering had split open and the cicada had started to emerge with its brand new coat. I was expecting the Cicada to come out of its old shell very quickly. But, I was wrong, the process took a considerable amount of time. 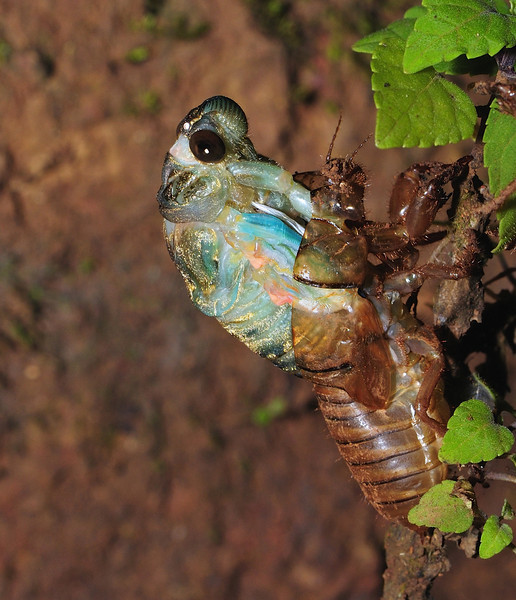 The Cicada was completely still for a while. Nothing happened, but it was slowly trying to push itself out, inch by inch. 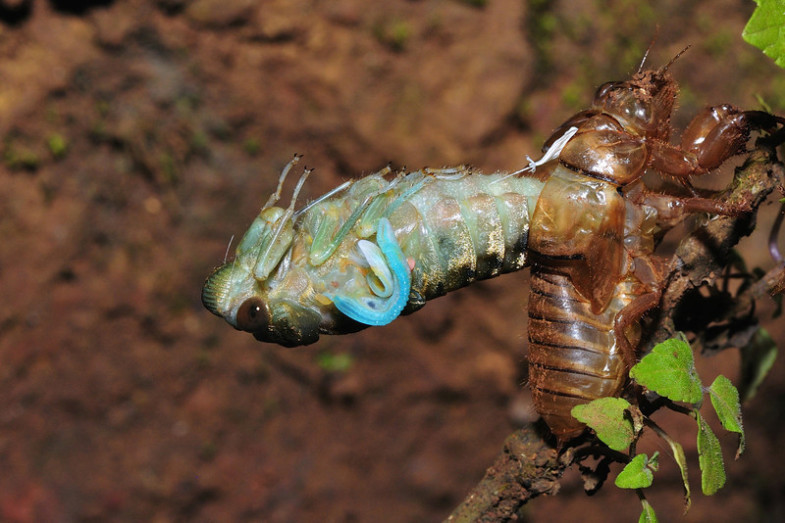 Slowly, the legs came out but still seemed very fragile to be able to balance the weight of the insect. The cicada started flexing its legs to enable blood flow to them. Gradually they seemed to harden, gaining in strength. All this while, the Cicada stayed there in an upside-down position. The wing parts called as wing buds had also emerged. It was completely folded and required a very good supply of blood to flow through their veins in order to open up and be ready for flight. 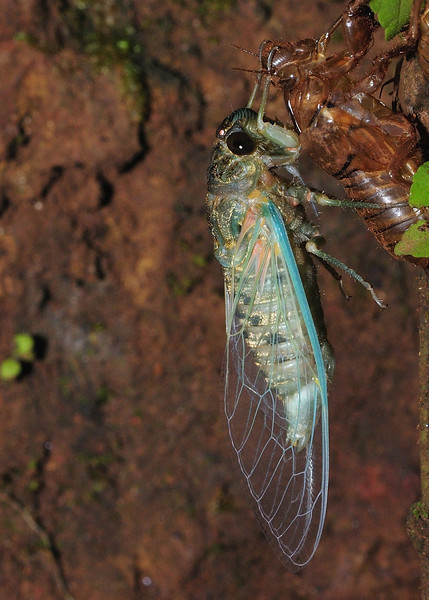 The brand new outer covering was bluish green in colour. I read that the colour would become darker as the outer skin thickens and eventually the Cicada would regain its original colour.

The legs had hardened enough to be able to support its body weight and the Cicada grasped on to the shed exoskeleton and got into its upright position. It sat there in this position for a considerable amount of time to allow the rest of the body to strengthen.

Once it had gathered enough energy, it was now ready to fly away with its brand new look. The whole process was indeed a very slow and strenuous one, taking a lot of energy from the little insect. Albeit, it was a successful one and I was very happy to have been able to witness it.