During my visit to Greater Rann of Kutch,Gujarat, we spent a day in the Mandvi coast to observe and photograph waders near the sea shore.

We saw various species of birds, but the two highlights of the day were Oystercatchers and Crab Plovers. 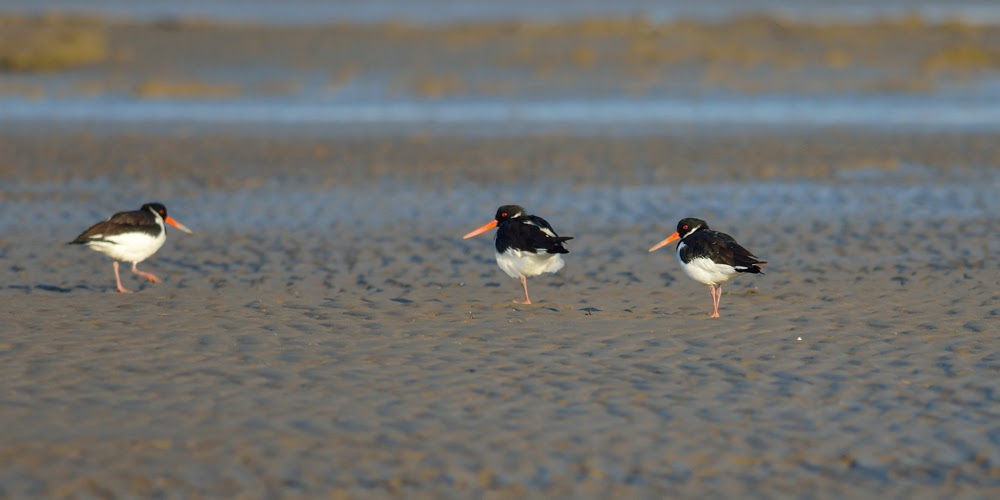 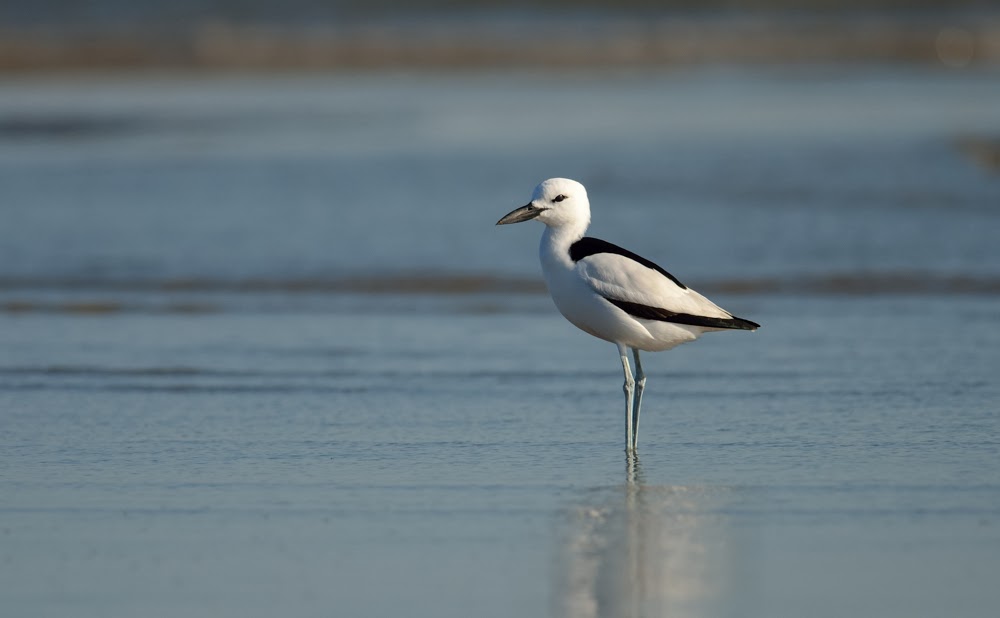 Oystercatcher (Haematopus ostralegus) is well known as a coastal species and is easily recognised by virtue of its large size, combination of black and white plumage, long bright orange-red bill and pink legs. During flight we can see a prominent white wing-bar and during winter, a white 'chin-strap' develops. Both the sexes are similar in appearance, although males often have relatively shorter and thicker bills.

The strong, flattened bill allows the oystercatchers to prize upon cockles, mussels and other bivalves that other waders cannot exploit. They also feed on worms, limpets and crabs.

When we saw them, they were extremely skittish and never allowed us closer. We had to crawl inch by inch, lying on the beach with each wave hitting us on the face. All this, to get a decent image. Luckily, the sea was not rough and the waves were not very high. 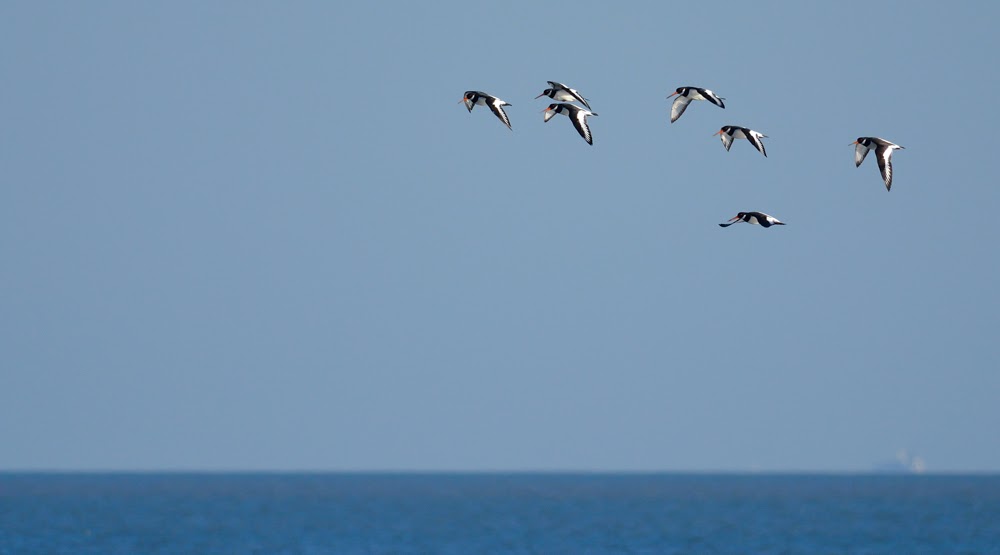 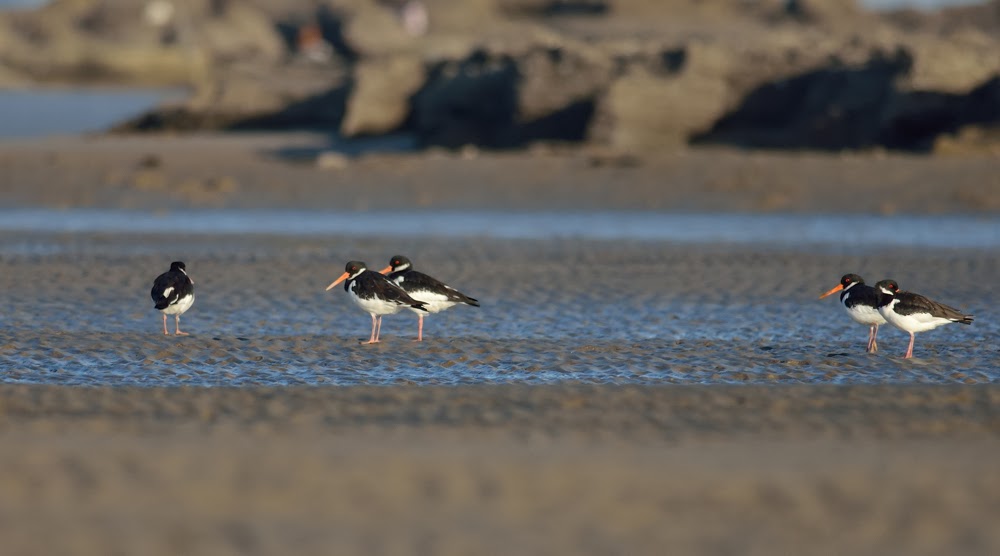 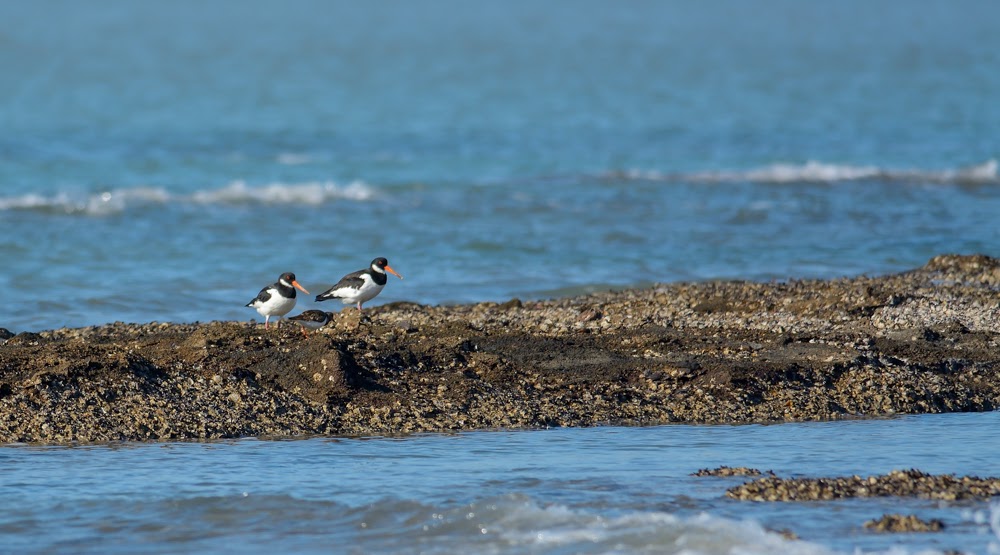 Crab plover is remarkable for being the only representative of the Dromadidae family, which in evolutionary perspective means that, this unusual shorebird has no living close relatives. This species has a distinctive appearance with white plumage on the body and head, contrasting with jet-black primaries and back feathers and a long black gull-like bill. Like most waders, legs are long with partially webbed toes and the tail is short.

Noisy and gregarious, the crab plover is commonly encountered in small groups foraging on the shore for its preferred prey-crabs. These foraging groups usually comprise around twenty to thirty birds, but may number as many as 400 during non- breeding season. The crab plover is active during the day and night, taking advantage of crabs, marine worms and mudskippers exposed by the receding tide. This species’ large, powerful beak allows it to tackle crabs without suffering injury, swallowing smaller individuals whole and smashing larger specimens against the ground.

The crab plover is also unique amongst the waders for it constructs its nest in an underground burrow. After moving inland from the shore to sand dunes, the birds excavate an extensive network of interconnected burrows, about 1 to 2.5 metres long. The entrances of the burrows are initially angled downwards, before curving upwards and terminating in a nest chamber situated a short distance from the surface. The burrow is believed to serve two important functions, one of which is to insulate the egg against the extremely high temperatures that occur during the breeding season. The second function is that the chamber acts as a solar incubator, keeping the egg at an optimum temperature, which means that only a small amount of direct incubation by the parent birds is necessary.

We found them in a huge flock during morning hours and later in the evening, they were scattered around. When they saw the fishermen throwing fishing nets into the water, they actively utilised the opportunity to grab fish near the net. They gave no attention to our presence and we seized the opportunity to observe their interaction and behaviour with each other- adults feeding the young, hunting crabs, etc. 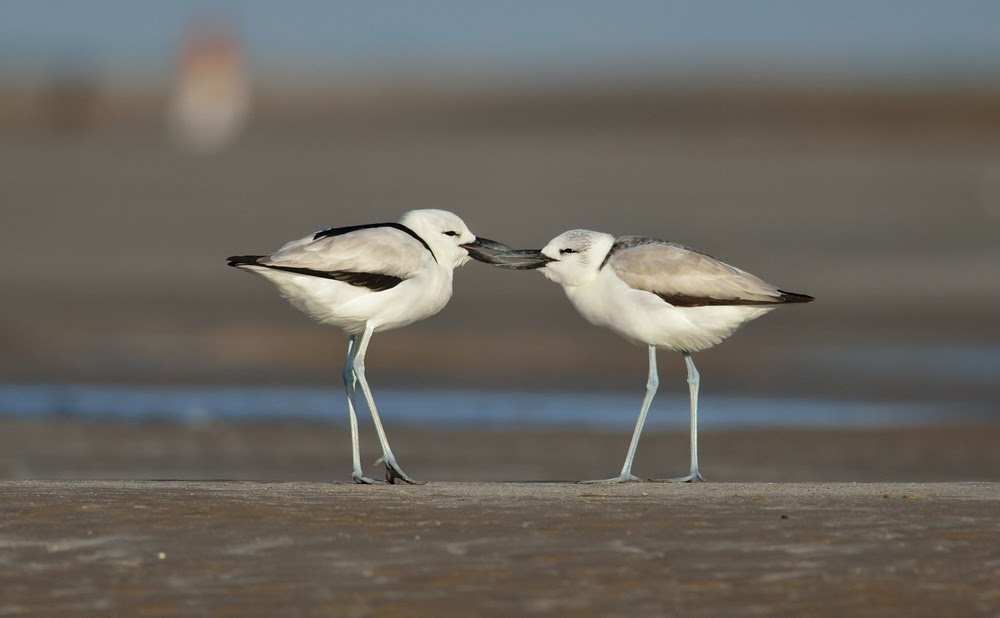 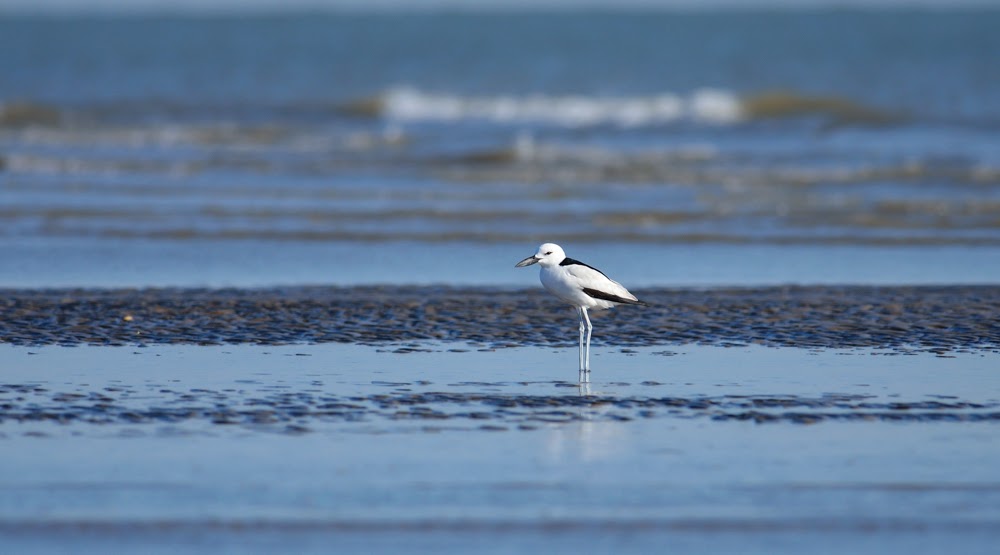 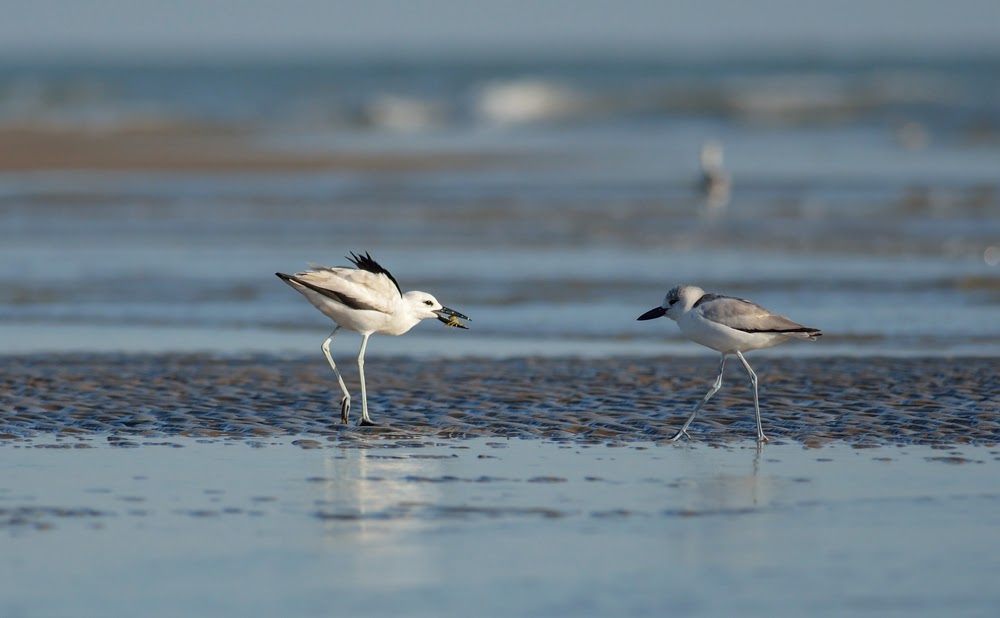 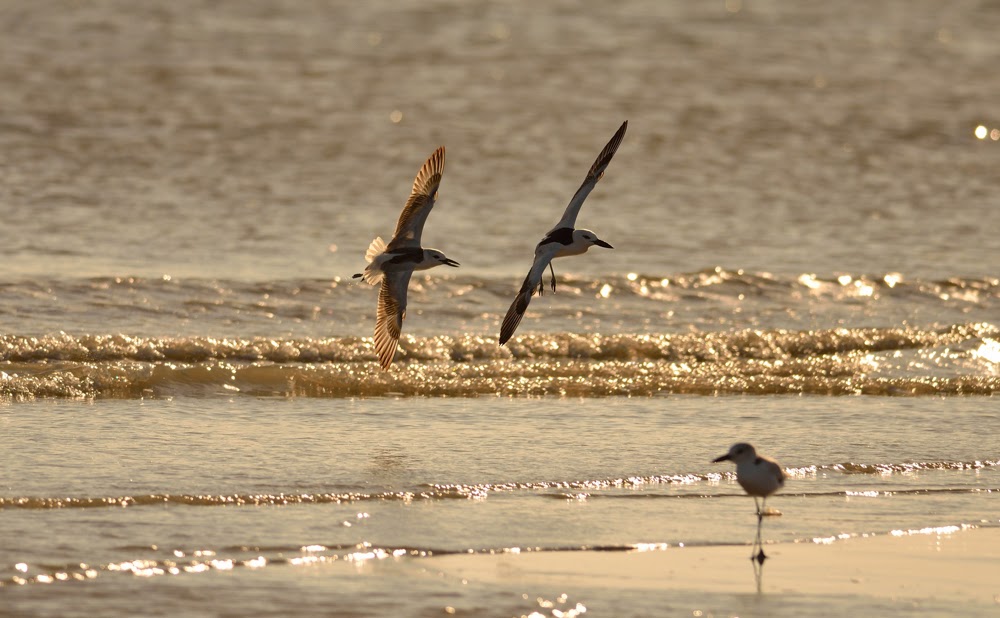 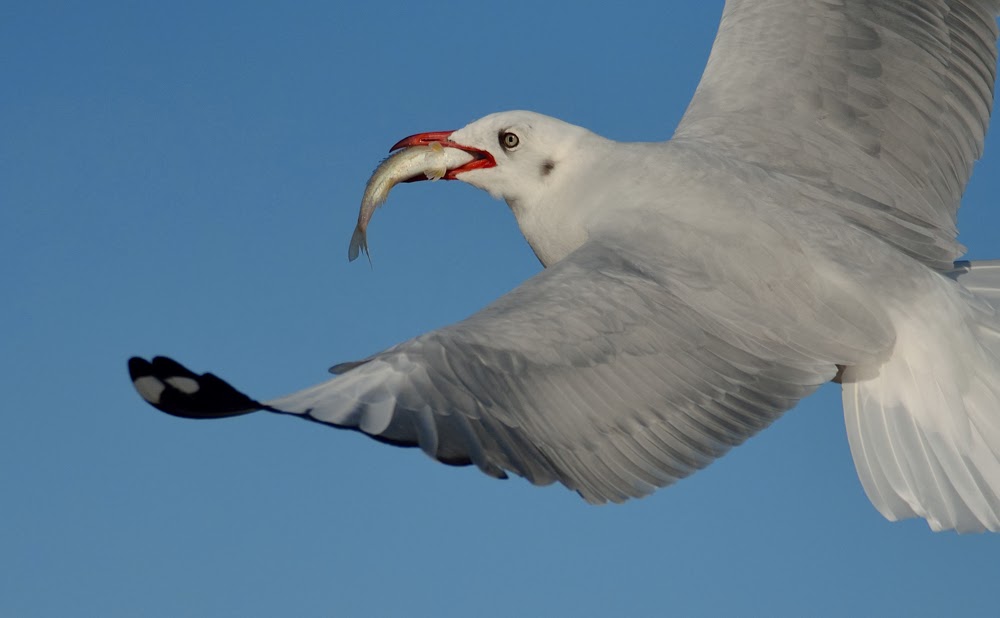 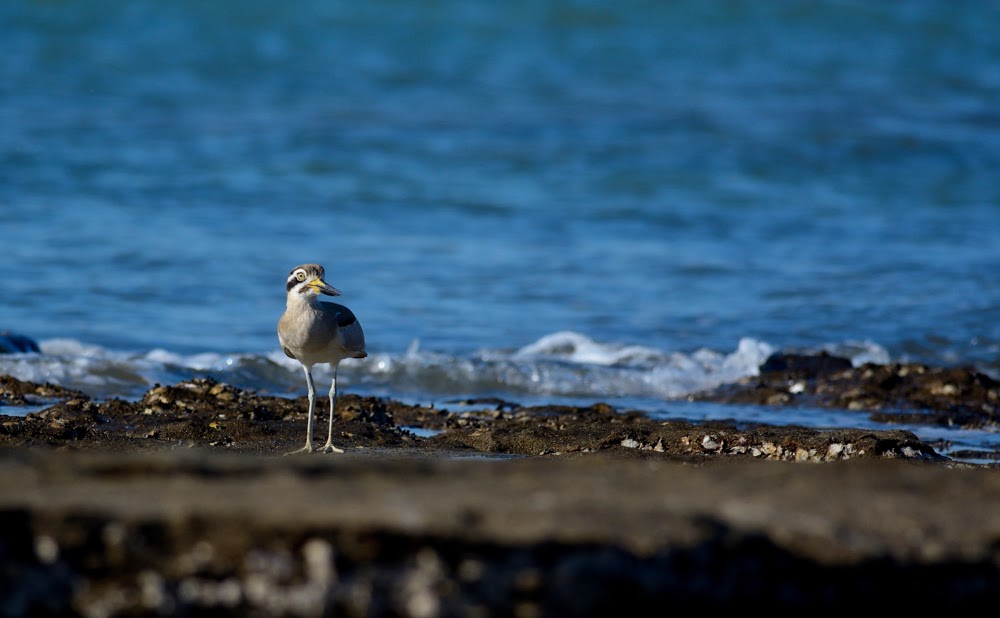 In the afternoon while we were walking towards the jeep, we saw a couple of Dolphins very close to a fishing boat close to the shore, the dolphins were jumping in and out of water. This was a spectacular scene to watch. 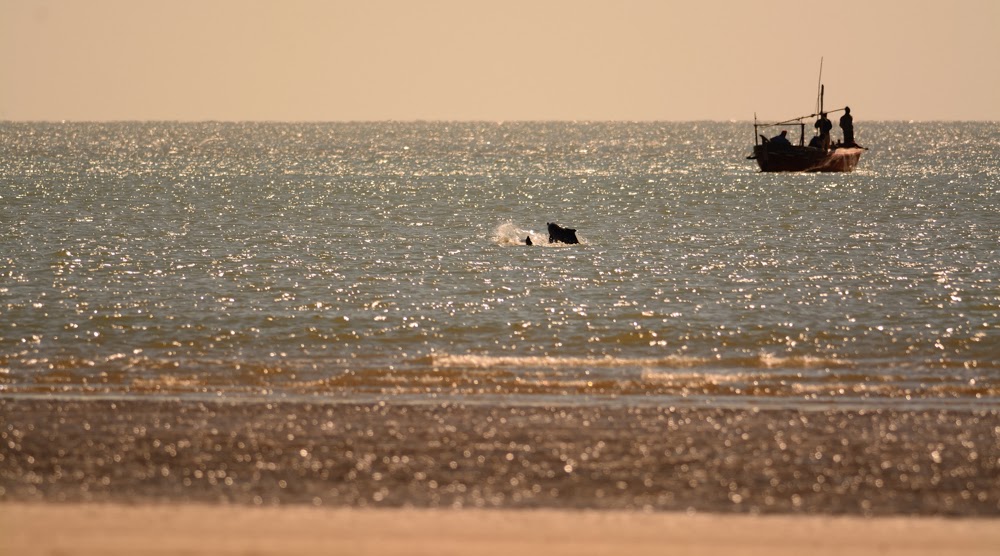 Altogether, it was one of my best birding days with many lifers, decent images and opportunities to observe wader behaviours and Dolphins! By then, far away beyond the water we could see the sun drowning into the ocean and the day was over.