A very powerful predator and a pretty merciless one as well.

One of the most powerful hunters among all the arthropods is the Praying Mantis. With their two long spiked forelegs, it waits in a perfect position for its prey to get close. Once the prey gets within reach, the mantis lashes out at it with its forelegs and grasps it. A piece of information from Wikipedia,

Mantises are also known to cannibalize. A female mantis being much bigger in size than a male, is known to bite the head off of the male while mating. But, having read that, there seems to be a lot of debate on this behavior and that, this is more commonly observed among mantises held in captivity.

However, mantises do predate on their own kind. They are very opportunistic hunters and would eat pretty much anything that they are capable of hunting. A couple of weeks back, I witnessed one such instance of an opportunistic hunting by a mantis. With numerous little mantises, there was a flurry of activity all around the flowering plants and they seemed to have hatched very recently. These little mantises were positioning themselves on the leaves in their typical ambush predator style. At times I saw more than five little ones on the same leaf. I wonder how they manage to communicate with each other and not get in each other’s way. As the young ones were busy trying to hone up their hunting skills, there was an old guy ( do not know if it was a male or a female )who was on the prowl. This older one started edging close to one of the little ones. I had no idea what his intentions were. I thought it might just pass by or at the least, the little one might scamper away quickly. But things transpired to be quite different. The adult mantis immediately thrust at the young one and caught hold of it with its powerful forearms. And in an instant he bit off its head and started feeding on it. The young one was no match for the much bigger mantis. 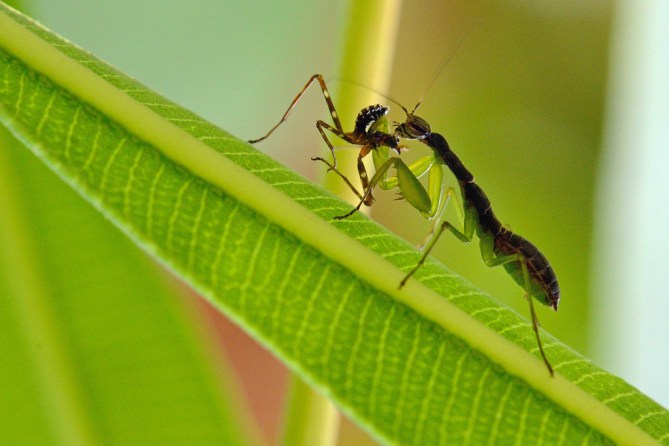 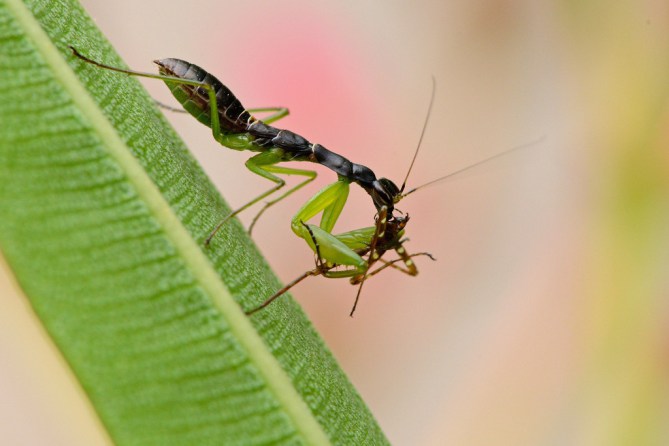 Having finished the meal and was not done yet. After a short while, I saw him go after another mantis, slightly larger one this time. 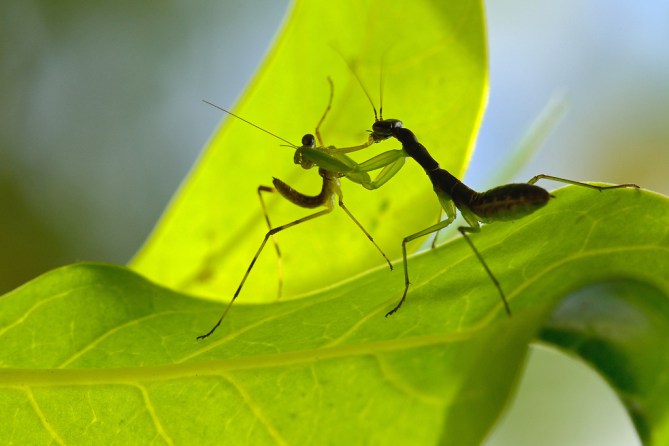 This one proved to be a tough opponent and a duel of sorts ensued between the two. However, the bigger one had the advantage and finally had his way. 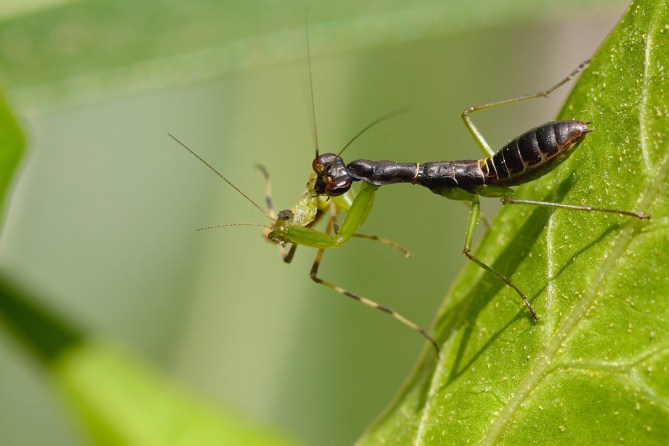 This was a raw experience from the macro world. I had previously seen a jumping spider kill another jumping spider, but this one was something else. It felt very violent and started triggering many ethical questions. Why would the mantis resort to this kind of a behaviour; to dominate over a weaker one? This is the way of nature, the simple acts of survival, akin to the fundamental rule of the raw and untamed natural world, “The Survival of the Fittest”.