Bhadra Tiger Reserve- Bhadra is a dense evergreen forest – its undulating terrain is dotted with lush valleys and misty peaks which form the watershed for the Bhadra river. Spread over the districts of Chikmangalur and Shimoga, the unique combination of three types of forests here – dry deciduous, moist deciduous and the submontane shola – shelters a wide range of flora and fauna. There are around 33 tigers in Bhadra. Though Bhadra is a tiger reserve, spotting a tiger in Bhadra is extremely difficult because of the density of flora. Knowing this, we never had tiger in our checklist at Bhadra.

It was almost 6 PM, and we reached the end of the safari. The safari was full of activities - bonelli's hunt, river terns' feeding, tusker, osprey, lots of cormorants, etc., and we all enjoyed.

While returning back, we saw another boat (a smaller one) near the river bank, and the person (must be the guide) in the boat showed a thumbs up sign to us. I thought we are late and he is calling us back. Then someone in the bank said, there's a tiger sighting. Again, I am used to many false alarms on tiger sightings, and I didn't want to disappoint this time as well. So far, I have never sighted a tiger in wild, even after a detailed try in Ranthambore, that too at the peak of the tiger season (May). 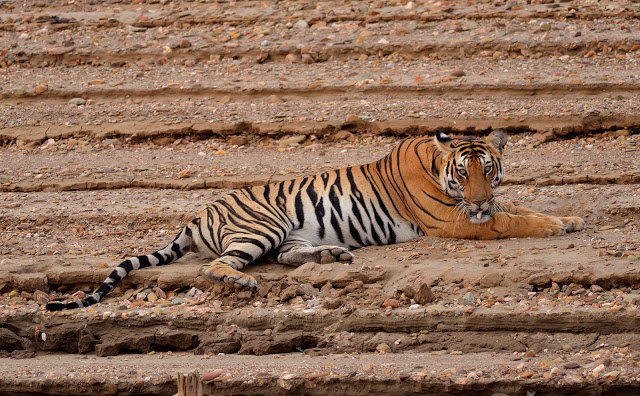 Our boat approached the direction the other boat showed us. And, yes. There's a TIGER, lying at the river bank, relaxing nicely. I am seeing a full grown Bengal Tiger. Actually, it was a Tigress. 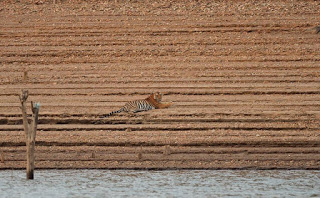 Our boat was switched off and the driver diverted it to the river bank without making a noise. The tiger didn't move, and we could only hear "kachak kachak kachak kachak"... All cameras were busy shooting the tiger. My hands were shivering as this was my first tiger sighting, and it didn't move away as I was expecting. The light was also dipping very fast. I managed to get some shots with a higher ISO.

We spent around 15 minutes, and I am sure, all of us in the boat would have got decent shots. But still some of the bazokas wanted to click it more, and was focussing the tiger even closer. 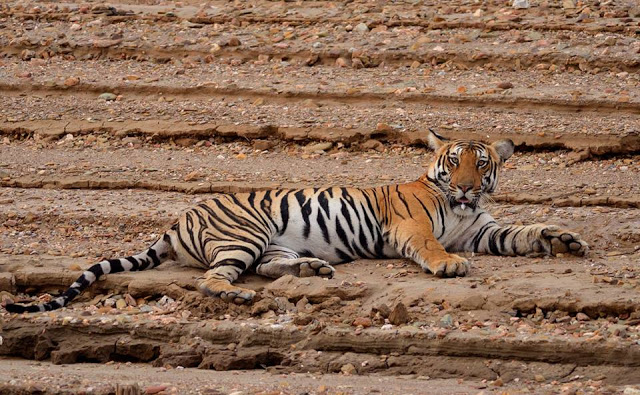 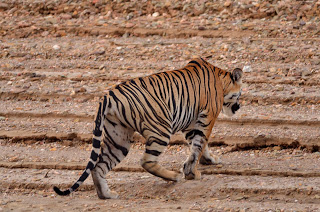 As time passed, the tiger decided to move away and hid behind a rock. I felt bad that the tiger was forced to move. Not sure how many realized that, we crossed the limit. When it got up, I noticed that the tail of this tigress had a unique marking, and for me it looked like a gun. Check it in the image. 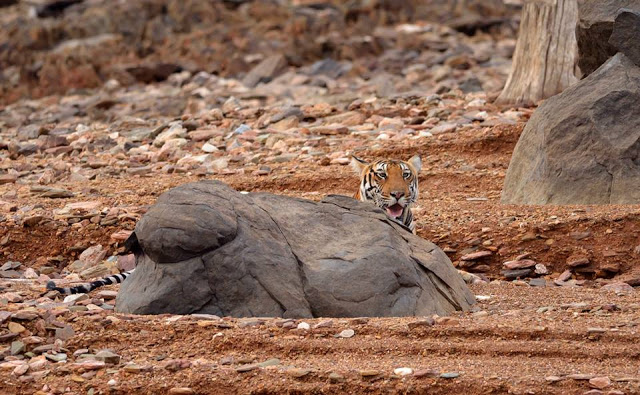 That's how, I saw my first TIGER, that too at Bhadra and that too while doing boat safari. I thanked God for such an amazing moment, when I asked for tiger, he didn't show, and when I was birding, he gave a tiger.