It may be offensive to people if they were named or nicknamed after their eating habits, but that is precisely how our mighty king cobra got its name.

Rat snakes (Ptyas mucosa), Common cobras (Naja naja) and Pythons (Python molurus) are among their well known prey. But the king cobra radio telemetry study in Agumbe made a remarkable discovery where king cobras were observed to be feeding on Malabar pit vipers(Trimeresurus malabaricus) and Hump-nosed pit vipers (Hypnale hypnale).Prior to this it was hard to reckon that a 12-foot king cobra would care to expend energy to hunt a 3 feet pit viper for a meal!

During monsoon malabar pit vipers and hump nosed pit vipers appear in these forests. It is during this time that king cobras mostly feed on them. 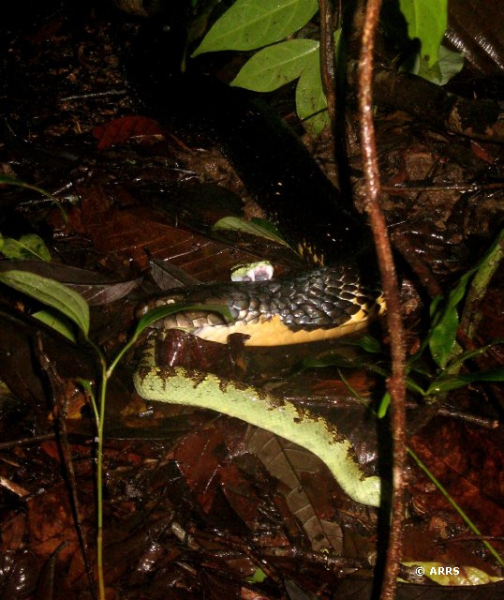 Like most reptiles king cobras are opportunistic. Our observations typically indicate that king cobras feed at an interval of approximately 15-20 days but this varies. For e.g. they usually feed soon after ecdysis(shedding of skin that happen approx. 7-8 times a year), king cobras do not feed for days during breeding season, a gravid female king cobra may eat only after building her nest, laying eggs and securing it (which might take more than a month), during monsoons the king cobra may feed more than thrice a week depending on the size of the prey. Only detailed studies can present any pattern or offer definitive explanations.

Watching a king cobra hunt and devour its prey is awe-inspiring and warrants attention. 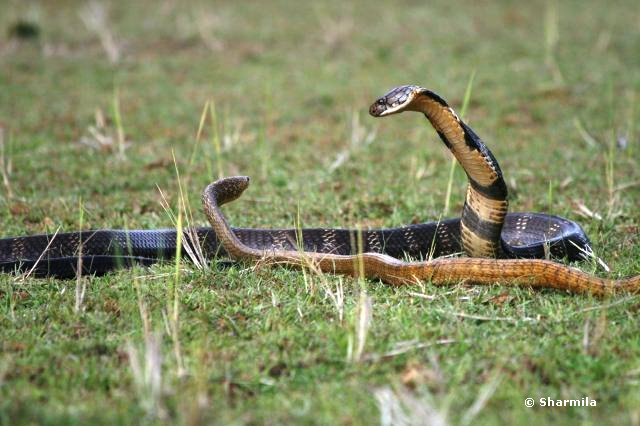 Rat snakes are among the most hunted prey by king cobras. They even chase after them up and across canopies!

King cobras rarely hunt in ambush. Instead they stalk their prey, chase after them in hot pursuit and then grab them close to neck (sometimes mid body too). But their strategies may vary while hunting a venomous snake, e.g. Cobra(Naja naja) where they will avoid being bitten back. Captive breeders also mention about them avoiding long fanged snakes like the Russell’s viper (Daboia russelii).

Once captured no prey is match to a king cobras size, strength or the quantity of venom. However powerful the struggle may be, in most cases it is the king cobra that triumphs. It then starts jaw-walking i.e. starts moving its jaws in a chewing motion towards the head of the prey without loosening its grip and then swallows head down.

The below video explains the feeding behaviour. It is an excerpt from the film ‘Secrets of King cobra’ by the National Geographic Channel (NGC).

Hunting and feeding are among the top reasons for human – king cobra conflict. Humans attract rats (due to improper methods of waste disposal, lack of effective storage of food etc.), rats attract snakes and snakes in turn attract king cobras. King cobras end up in peoples bedrooms, roof tops, backyards, trees, bathrooms, wells, store house, cow sheds and kitchen, either chasing after their prey or while resting after a meal. 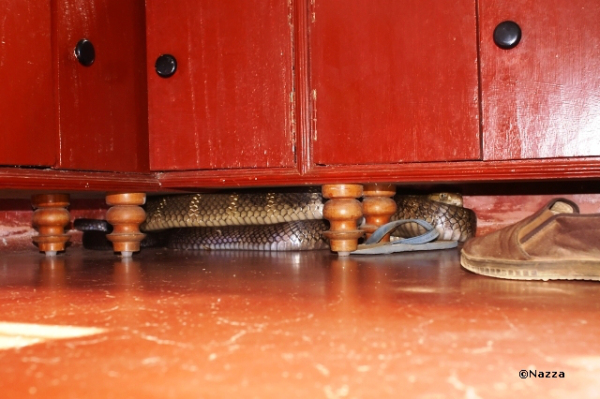 King cobra under a shoe rack. The owners thanked their luck for spotting the snake much before they slid their feet into those flip-flops. 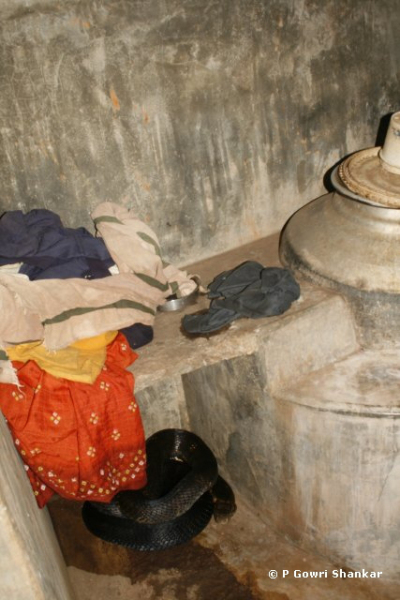 King cobras often seek refuge next to water heaters (‘Hande’) in bathrooms during monsoon. The warmth gives the much needed energy during those cold months.

When I get such a rescue call it is a true test of my skills. This means the rescue has to be done really quick, with precision and minimal stress; else it may regurgitate its meal (a method of escape adopted by many reptiles). The king cobra in the below image had taken refuge after a meal for more than four days in the attic and was not noticed until it defecated. 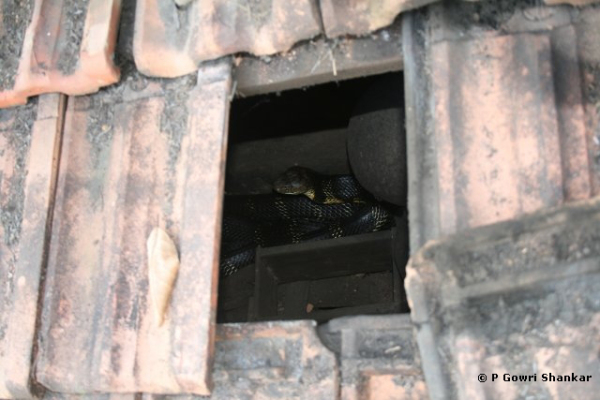 King cobra resting in the attic after a meal. 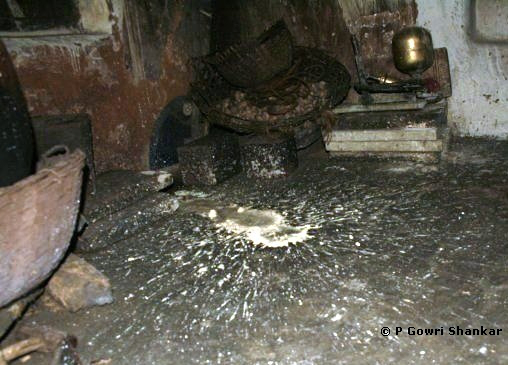 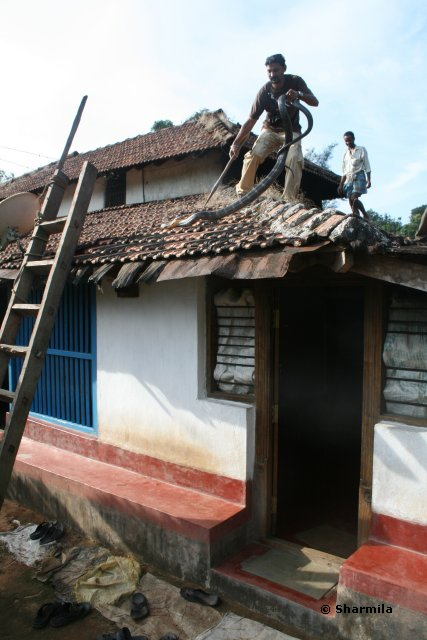 Balancing on weathered tiles that could break any time, ensuring a firm grip, maintaining sane distance and making sure the king cobra is least stressed was quite a task.

This rescue was not only a test to my rescuing skills but also my agility and acrobatic skills!

Until recently it was believed that king cobras always ate freshly caught prey. But this was proven wrong when I observed a king cobra eating the carcass of a road-killed rat snake. Though the king cobra retreated after being disturbed by traffic it came back the next day to finish its meal. This behaviour was confirmed by the radio telemetry team who observed the radio tracked individual eating the carcass of a cat snake (Boiga sp.). 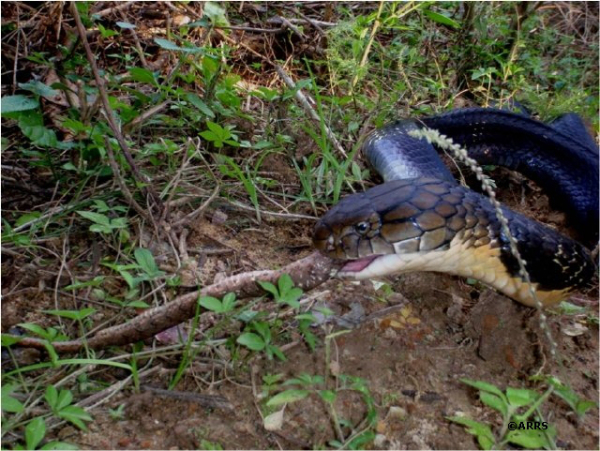 It is only during the mating season that king cobras are spotted in close proximity to one another else they steer clear from each other’s path fearing being eaten up. 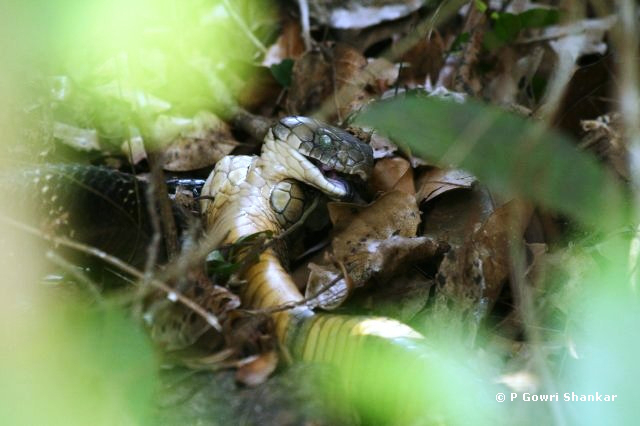 Size and strength play a major role in deciding the hunter and the hunted. A big king cobra would most likely kill a smaller one 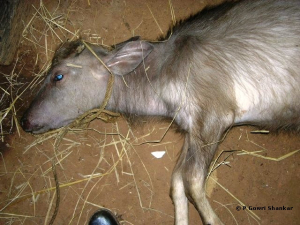 The calf succumbed to the bite in 20 minutes

We also observed cannibalistic behaviour in two mating pairs in 2008. In both cases the male killed the female, regurgitated and left the scene. The motive behind this killing is not clear but does not indicate feeding.

Like most reptiles, king cobras start hunting as soon as they hatch. King cobra hatchlings are believed to survive on small snakes. But very little is known about the feeding habits of juvenile king cobras in the wild. Studies are needed to uncover this facet of a king cobras life. 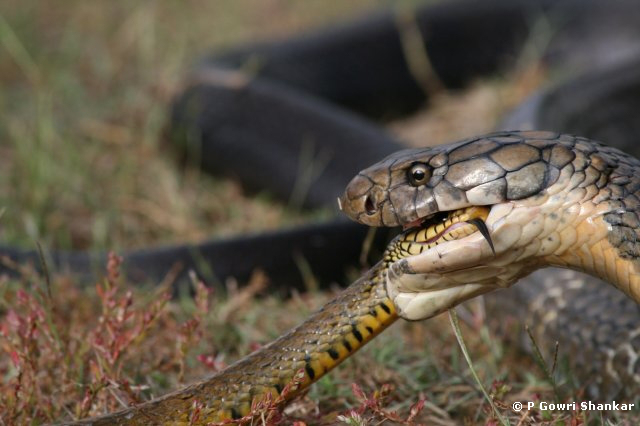 The king cobra is the top predator among snakes and an apt indicator of the health of herpetofauna in its habitat. As a flag ship species its protection is imperative and most necessary today.