Lions and the Elephants, as all know, are perennial enemies. One constantly getting the better of the other (with probably the lions having a slight edge there). Given a chance, I guess, in most cases, either of them would prefer to avoid crossing paths with the other. However, things tend to be quite different during the dry summer months. Water becomes a very precious commodity and both of these mammals are drawn to whatever few places there are, that are left with water. That is when, their paths are bound to cross.

When, that does, happen, there are bound to be a lot of apprehensive and adrenaline rushing moments. Was lucky to witness one such moment on my recent trip to the vast and amazing grasslands of Serengeti, in Tanzania, Africa.

Here’s an attempt at sharing that experience of mine through a short photo story.....

It was one late afternoon in the grasslands of Serengeti. We were watching a pride of lions resting near a water hole. It was quite a big pride, with many young cubs and juvenile ones in them. The mothers were busy feeding their cubs, while the little more older cubs were busy playing around. They all seemed to be having some quality family time.

At a distance was a small family of elephants happily grazing their way towards the same water hole. Didn’t know, if they were aware of the lion’s presence at the water hole at that time……There was a little one among them as well and we were getting a bit anxious looking at them moving towards the pride. 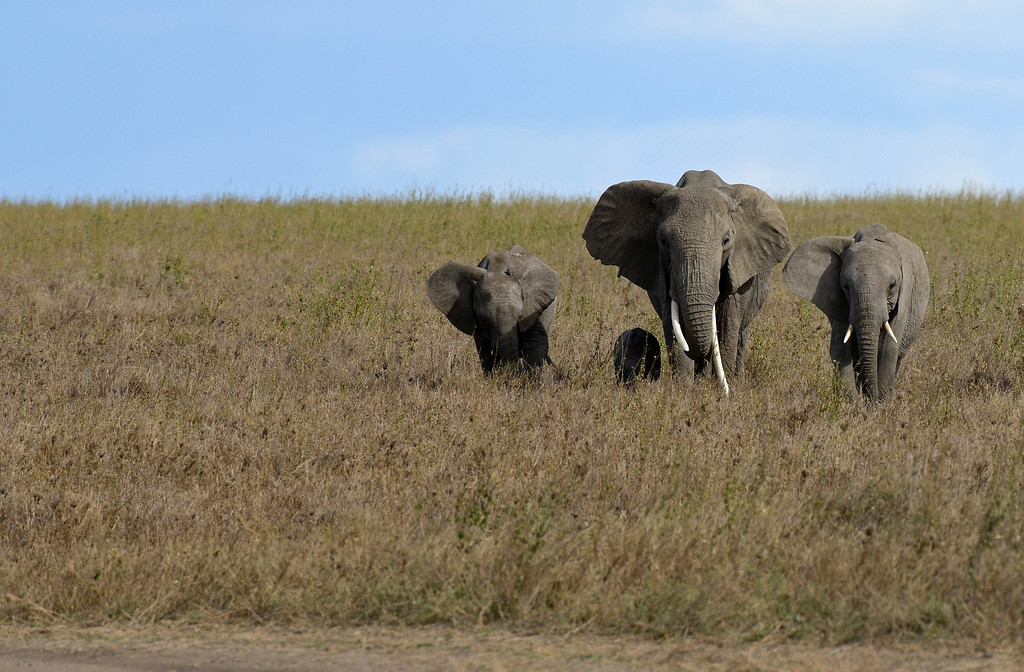 It was certain that, thirst, was what, was drawing them towards the water. They probably had been feeding for quite sometime, just like elephants do, and now, as the sun was going down, they were looking for a nice drink of cold water, before they could call it a day.

They headed straight to a small pool of water and started to drink. After a few gulps, they decided to move towards the main stream, where the lions were resting.

When they started moving towards the stream, a lioness, probably the leader of the pride, started moving away from the resting pride and the young cubs. It seemed like, she was trying to create a kind of a distraction to draw the elephants away from the stream. At that moment, the matriarch, the leader of the elephant family, sensed the presence of the predator and tried to back away. But, the physiological need to quench hers and her family’s thirst was egging her on towards the water.

The elephants took a slight detour and went towards the stream. As they got closer, the lions resting over there, were up and alert. The presence of cubs and young ones seemed to make them more cautious. 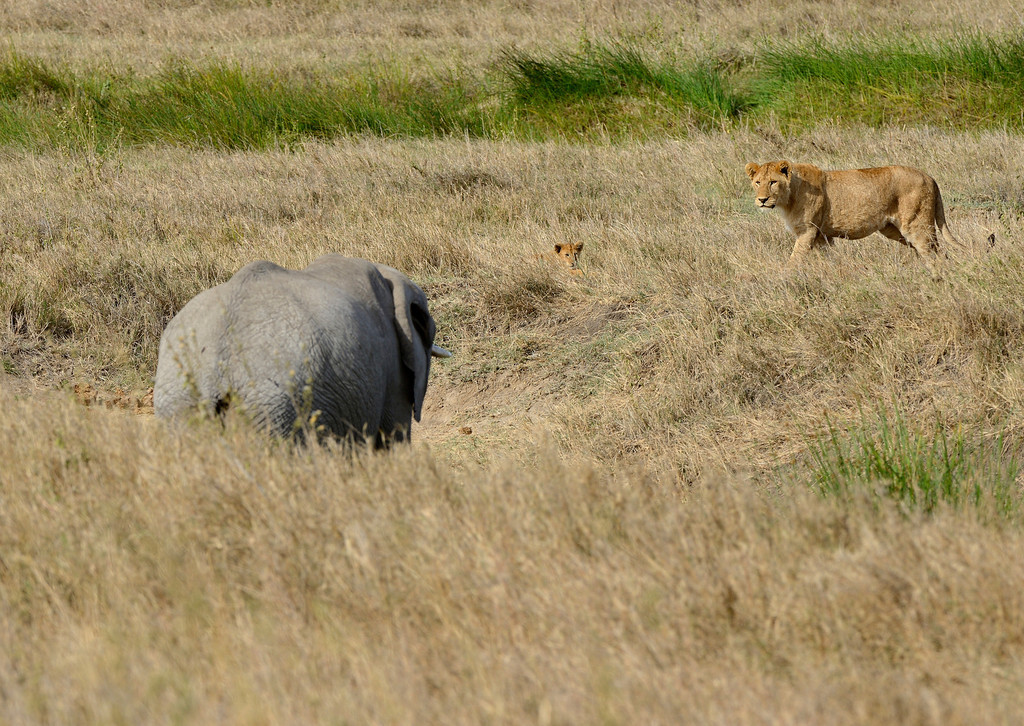 Lioness and cub, wary of the elephant

They were constantly watching the elephants. There definitely was an immense amount of tension in the air, but very little drastic movements on the grassland. It seemed more like a cold war. Neither party seemed to be interested in any belligerent action, which, I guess, was more due to the presence young ones on both the sides. 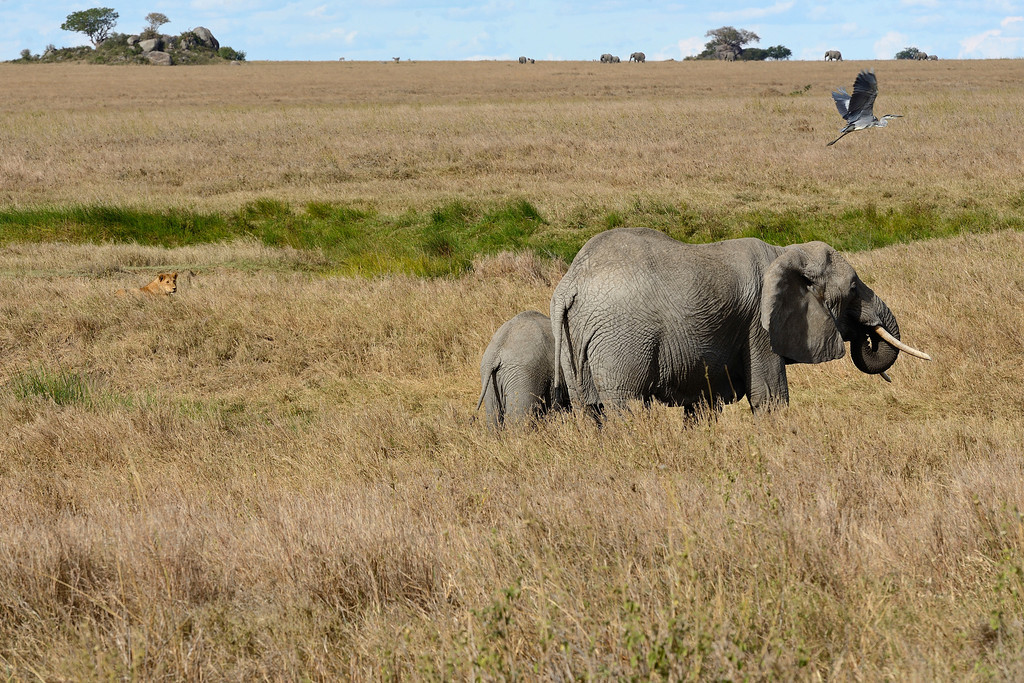 Older elephant is apprehensive about the presence of the lions

Flanked by the nervous and anxious lions, the elephants started having their drink… 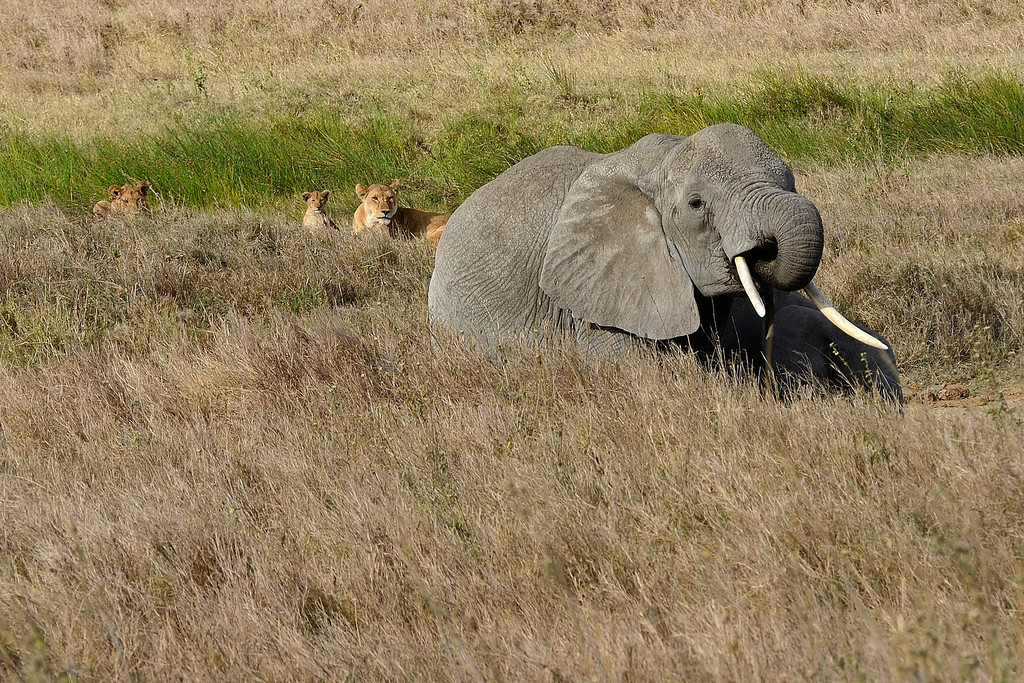 The elephants, especially, the younger ones, seemed quite apprehensive. Once in a while, they would lift up their trunks at the lions, in threat, as if saying, keep away. Then, one of the little older ones gave out a loud trumpet and the nervous pride of young lions backed away and started moving away from the stream. 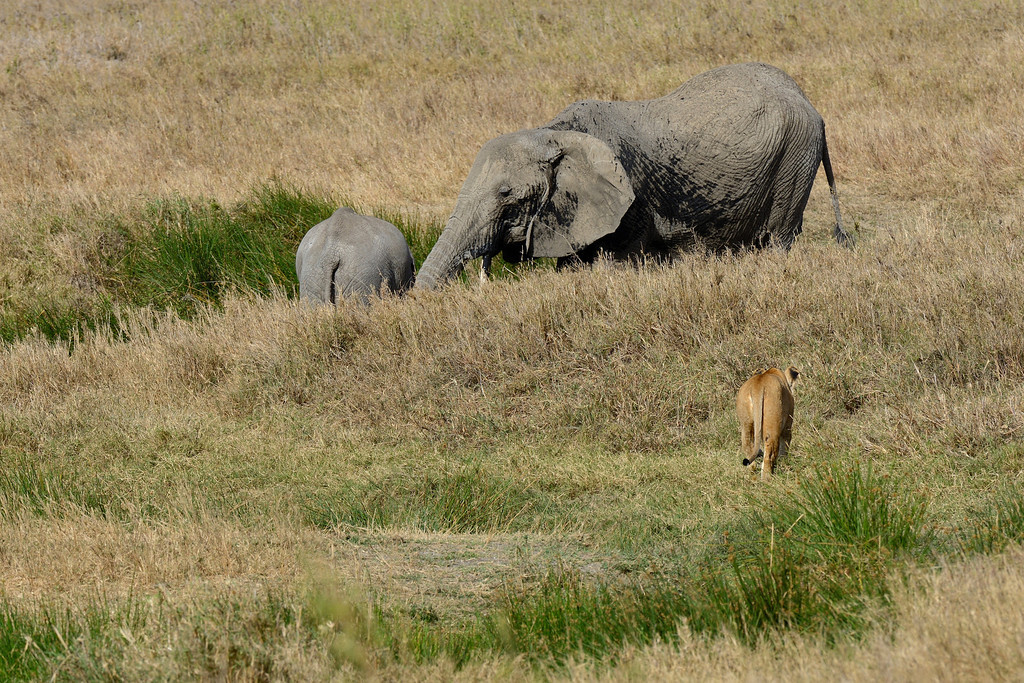 This gave some peace and time for the elephants to drink to their heart’s content. 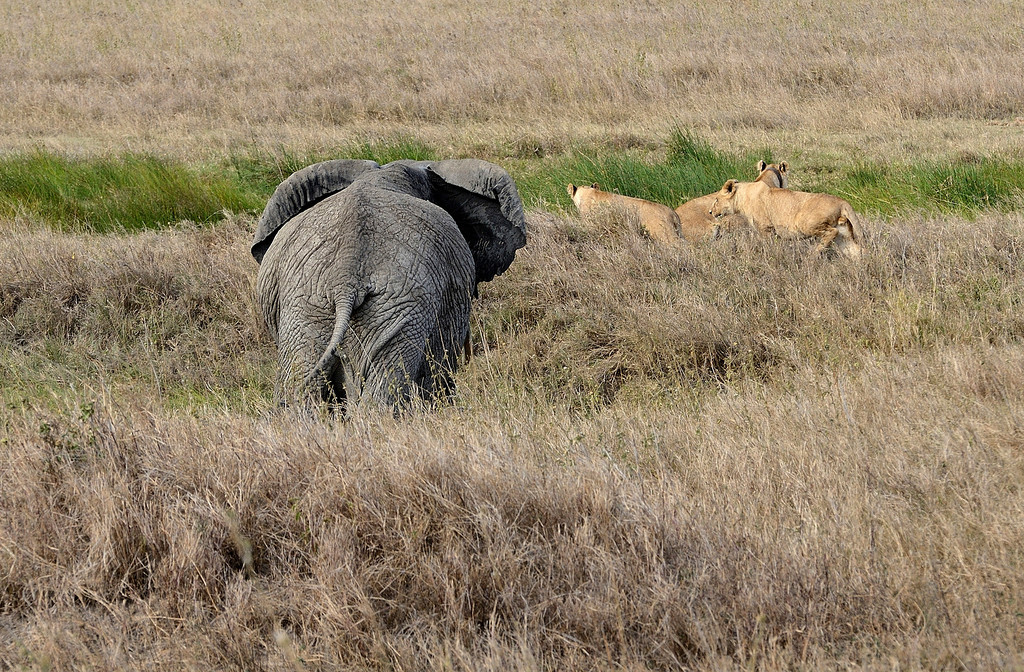 However, the lioness wasn’t done yet. She didn’t seem to be very comfortable with the presence of the elephants at the water hole and was constantly trying various tricks to distract them and draw them away from there. 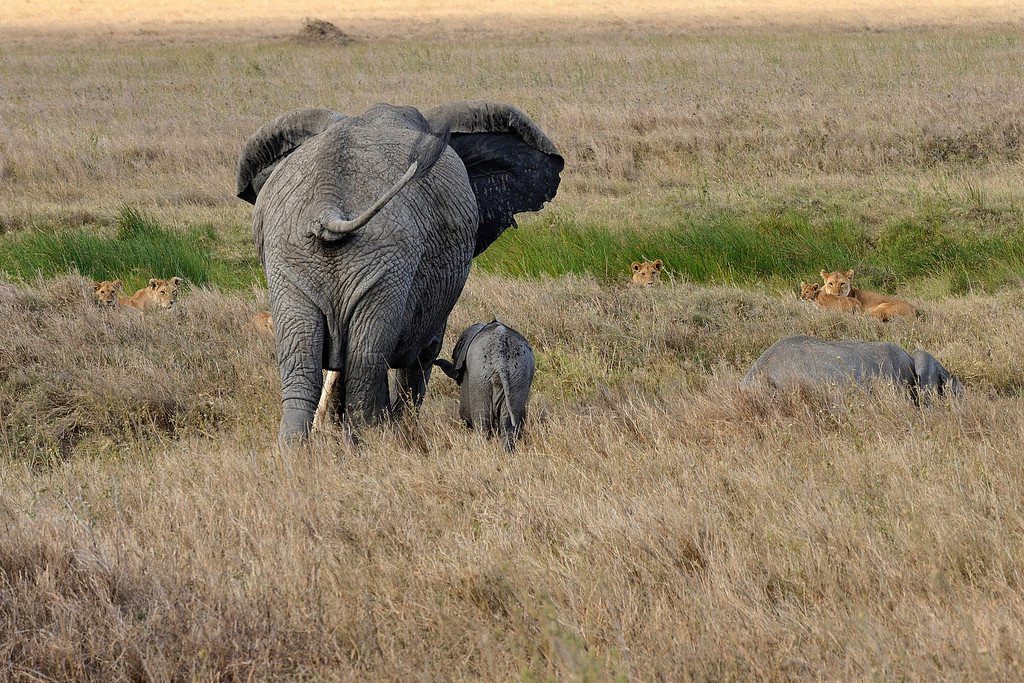 Akin to any predator, she kept targeting the little one amongst the elephants, crouching and moving towards it, trying to create a sense of panic among the elephants. I felt that it was more of a mock effort, as the lions didn’t seem to be on the lookout for a hunt. However, if there was a chance, they would have taken it anyway for sure. 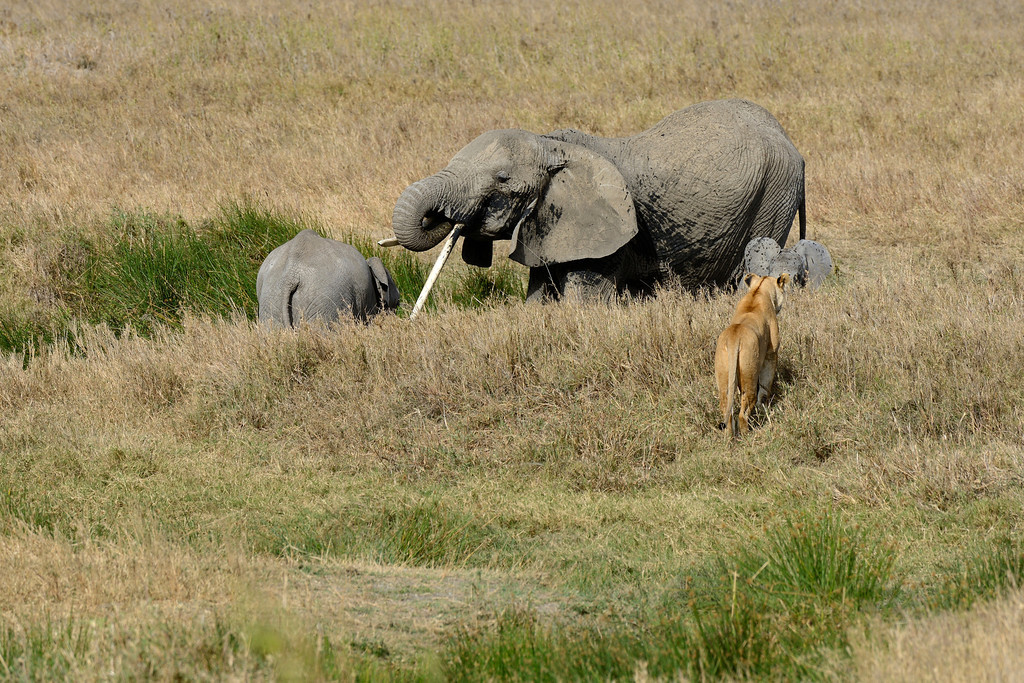 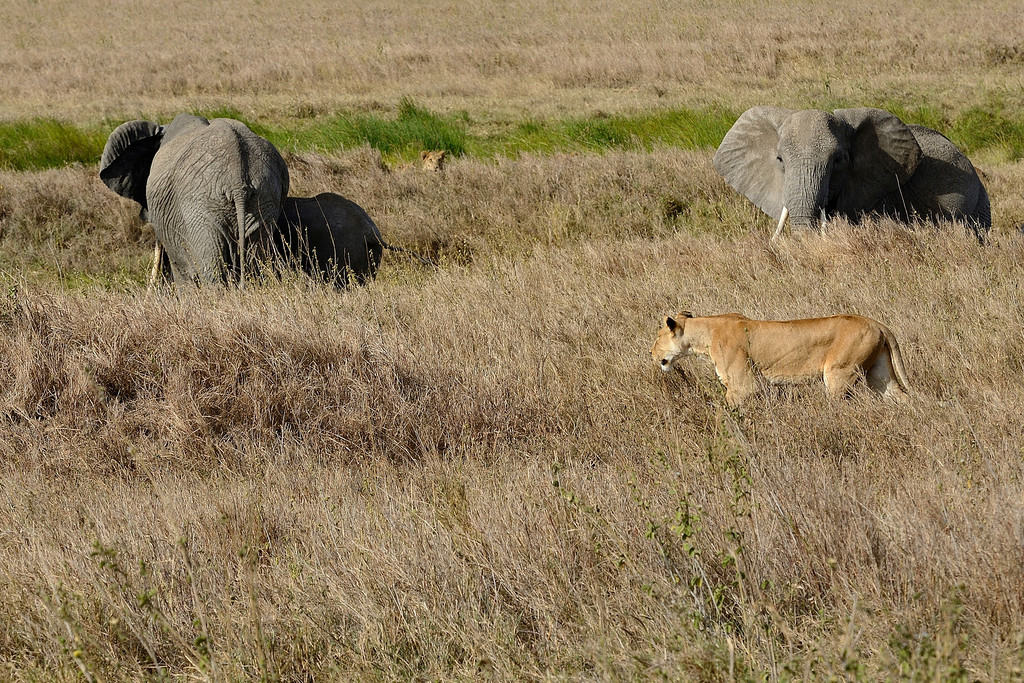 The matriarch, noticed this and charged at the lioness with a deafening trumpet and drove her away. The matriarch, finally, seemed to have had enough of this. Since they were all done with the drinking, she decided to move on. Gathering up her family members, she started walking away from the water hole, back on her journey into the Savanna.

All is well that ends well. While some might say, a hunt would have been an awesome moment, I was happy that peace prevailed at last and things settled between the two parties without any bloodshed…

Read the part - II of this amazing predator-prey interactions here