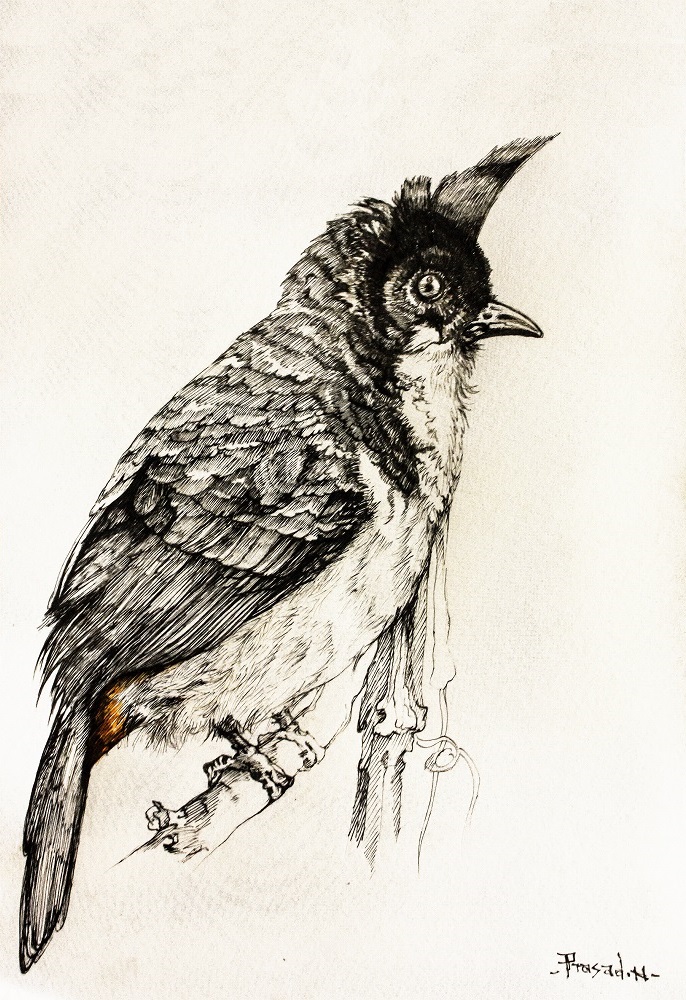 Its brings me great pleasure to share my artworks and observations on Birds of Bangalore with you all. Through Wilderhood every Monday I will be sharing an artwork and small write-up on the subject. Hope you too would enjoy them as much I do!

How many of us know that there are about 60 species of birds found in and around Bangalore?

This week we start off with the humble Red-whiskered bulbul(Pycnonotus jocosus) is a common bird sighted around 10-15 Kilometers from the actual Bangalore city. They are a member of the bulbul family of passerines.

They have a tiny crest on the head, body is dark brown with patterns of scales like the ones found on fishes. Their mustache is vibrant red which gives them the name Red-whiskered bulbul. Their rump is white and tail is tip is with white marking as well. Both male and female look alike, younger ones are duller brown. They calls are strong single note which sound like” quee-quee-quee-quee”. This is a bird of dry scrub,open forest, plains and cultivated lands. They feed on insects, flowers and fruits.

About 8-9 years back they were found around Bangalore city was well, we had many scrub forests, open forests, flat plains, agricultural fields and grape vineyards in Bangalore. With the city pushing its boundaries and fast paced industrialization, there has been huge habitat loss, this loss means losing nesting space, losing food. Resulting in these birds moving their homes to outskirts of Bangalore.

This bulbul was sighted at Hoskote at about 6:30 pm in the evening, it was getting darker which made it tough make a great picture. However was able to get closer and observe its features, perch and habitat for good ten minutes. As I approached even closer he just puffed up his feathers which is also a treat behavior i've noticed similar behavior with bee-eaters and other mid sized or tiny birds.

They try to show themselves bigger to their counter-parts and challengers. Interesting behavior is in it? After heading back home, made many drafts on this observation in my studio. About 4 layers of Indian Ink has been laid in this artwork. Through this artwork I wish to convey the same behavior, hence the title.

Hope you enjoyed my first post on Red-whiskered bulbul(Pycnonotus jocosus), looking forward to sharing my art and information on Birds of Bangalore!