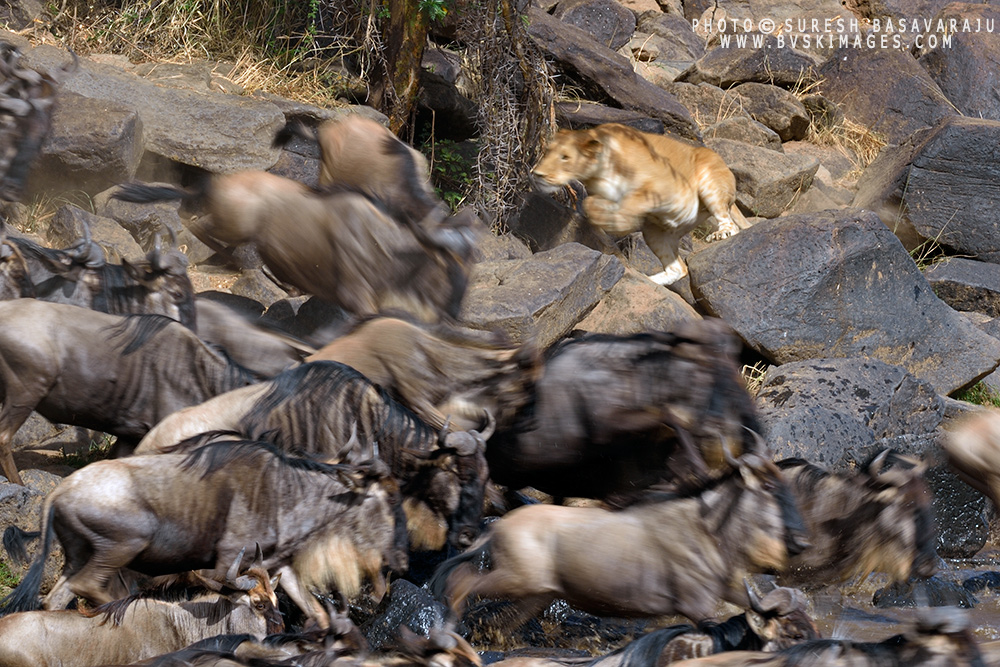 We all make mistakes, the only difference is some admit and some do not!

I am talking about the mistakes one does when photographing a dynamic action-oriented scene. Errors in not obtaining focus on the subject, exposure, and composition. Also, errors in choice of shutter, aperture, and the list goes on.. While some can be corrected or recovered later to an extent, whereas errors in focussing leading to out of focus image and shake introduced in the image by subject motion or camera shake are hard to recover.

What happens in the dynamic scene is that rapidly changing events have multiple choices for creating an image. When a photographer is not ready for these events and does not change the settings, strange and funny things happen.

In nature and wildlife photography one encounters typically two types of scenes.

Nature is so dynamic that on occasions a static scene turns into a dynamic one within no time. As you are photographing a peaceful herd of deer, suddenly two males could start a sparring, the presence of a predator could completely change the scene. The slow moving elephant may suddenly decide to charge up. Even in landscape photography, a flock of birds flying into the frame alters the mood dramatically!

In the end there are no excuses! whatever the scene, a clearly exposed, sharp, distraction-free image is what captures viewer's eye. So the photographer has to know the tools very well and be responsive to the changes otherwise lose the image. This is easier said than done!

One fine hot day, I was waiting by the mara river banks where a large herd of wildebeest had gathered for river crossing. Couple of hours had passed and the herd just kept on swelling up. As the herd moved towards the slope leading to the river, they would halt, turn back and move towards another crossing point few hundred meters away and the 50-60 vehicles which were waiting for the crossing would move accordingly. This went on for many times and each time the vehicles would move in a frenzy to get the best vantage points along the high banks. Often heard people say that the wildebeest are stupid when it comes to crossing. With the vehicles moving constantly, I was not sure who was more stupid than wildebeest here!?

The reason for their reluctance was soon clear. At one point there was a lone lioness resting in the shade of the bushes about 200-300 meters away and on the other end the entrance was steep. It was now about five hours of waiting for us. In between we moved around and had lunch. I made some images of the wildebeest in monochrome. the lone lioness and the zebras.

At one point few wildebeest got down the slope closer to the lioness and started to drink water from the river, they mustered enough courage and crossed over to the other side. This started the crossing and soon hundreds of wildebeest were crossing over. The scene was still static for me because the subject was wildebeest and there were no crocodiles in this shallow part and I reasoned a lone lioness was no threat to the wildebeest. So, I started making images in monochrome, in wide view, in closeups, in high shutter to freeze the water splashed by the herd, and in slow shutter to create a blur of the wildebeest in a line crossing. The day being sunny, it was difficult to get a shutter of 1/8 or 1/15 that I wanted! I was at ISO 125, 1/50 @ f/20. Couple of stops slower than 1/50 would have been great. I was thinking what next to try out and suddenly Goutham Shankar, who was with me in the vehicle spoke out “she is coming down”. While I heard him, the information I did not process. As he switched from the movie mode to image mode and started the rapid fire of shutter, I realised what was happening.

The lioness which I had written off as no threat to the herd was on its way down from the slope and attempting to hunt down the wildebeest. I moved the camera from the crossing to the left hand side where the lioness was in full chase and the herd in total disarray. Without realising the settings I had a few moments ago, I composed, focussed and started clicking.

The action lasted 2 seconds and 18 frames, first frame of the lioness charging was at 15:36:59.50 and the eighteenth frame ended at 15:37:01.70. The lioness darted down. The herd was in a stampede. It could not isolate a single target, moved up the slope and the kill happened behind the bushes.

Once the chase was over and adrenalin rush subsided, I checked the screen and was upset at the settings that I failed to correct for the scene. At 1/50, the shutter was not enough to freeze the action. Two turns of the wheel and I could have raised the shutter to a action freezing 1/500 or 1/1000. Getting immersed in the action, I had totally failed to check the shutter speed.

I was about to delete the images as the subject motion would have rendered unusable image. I decided to check it out later on a computer screen.

It’s been three months since the trip and I revisited those images. They aren't sharp enough, but the rocks in the image, the shrubs, and even hind legs of the lion are sharp. The subject is in motion, which is of course conveys a different mood to the image.

This is the strange and funny part I was referring to, in the beginning of the article. Sometimes you end with an image that you did not intent to make. It creates something more interesting than the original in a photographer's mind. A friend of mine had taken a very successful image of a leopard climbing down a tree some years ago. The downward movement of the lens following the leopard coupled with slow shutter speed created a very dramatic image conveying speed. I congratulated the photographer on the thought to use panning in a vertical mode (Usually panning shots are horizontal). I have been told it just happened :)!

So is it still an image worth anything at all ? Can it be counted as a photograph taken by the photographer? I don’t have an answer but many discoveries and inventions were by an act of accident. Glass which is a vital component of the tools for a photographer seems to be an accidental discovery by sailors lighting up a fire near a seashore ages ago.

Does this photograph of the lioness hunting wildebeest with subject motion work? you tell me..!