During October 2014, my friends and I went to stay at Gaia Farms, which is run by a group of nature enthusiasts and is being established as a sustainable farm. It is located in Gulduve, a settlement amidst forests and farmlands in the Sawantwadi Taluka of Sindhudurg district, Maharashtra. Our plan was to stay for 2 days and explore the surrounding forests as much as we could during that time. After a glorious two hour birding session on the morning of October 29, we decided that post breakfast, we would try our hand at kayaking!

At around 11:30AM, seven of us left for the stream that was just on the other side of Gaia Farms. After a five-minute walk downhill, we reached a flat land where there was a kayak tied to two palm trees. It took the strength of seven adults to untie it and place it on the ground. We then lifted it and brought it to the bank of the stream.

Atul and I were the lucky two, to first take her out in the stream. I had kayaked only once before and that essentially meant that I knew nothing about it! Since we had only one oar, it made sense for the more experienced person (Atul) to handle it. We managed to scramble into the boat while others tried to hold it still. One push and there we were – bobbing up and down on the forest stream. We got off to a “stuttering start” since we repeatedly got stuck amongst the low-hanging branches of the trees near the bank. 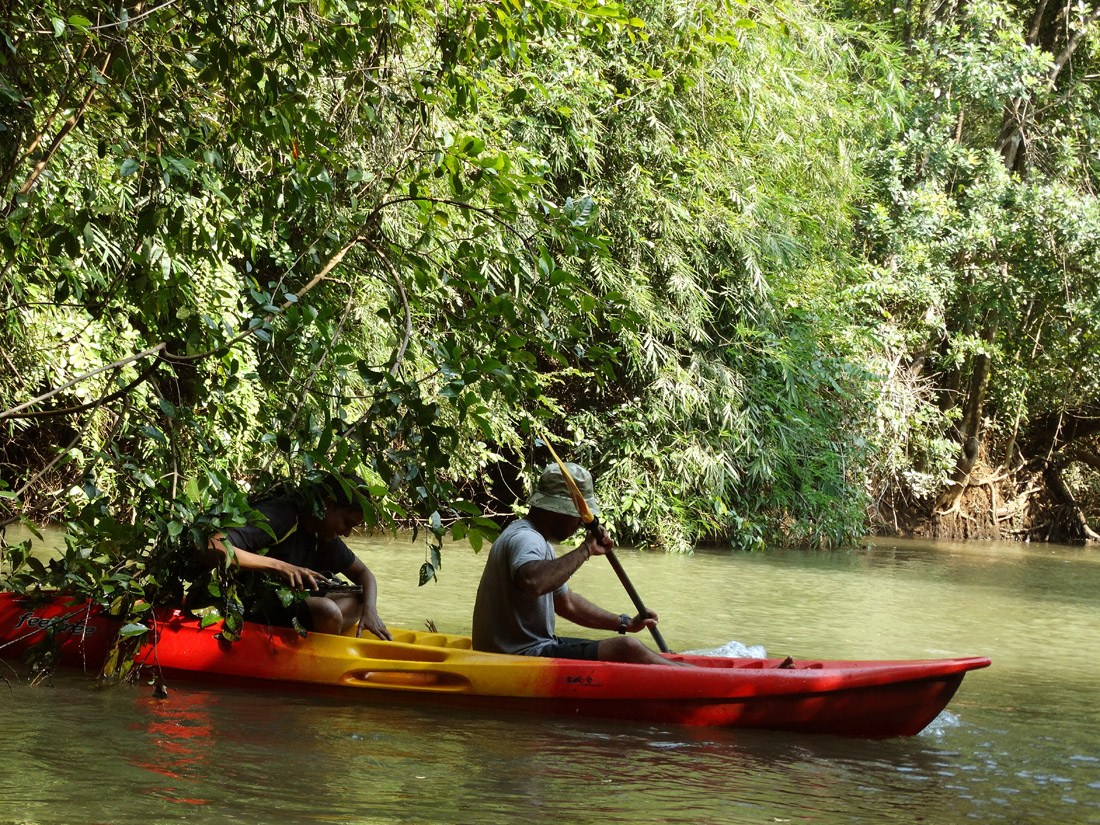 Once we were in the middle of the stream, the flow was fairly strong enough to keep us moving without rowing. After a quick test ride, and after others decided to not go for a ride, we thought we should take the kayak out for a longer journey. So we bid farewell to the others and took off.

They waved goodbye and one of them said - “There are crocodiles in the water, but you rarely see them”

My heart skipped a beat. I am not much of swimmer. How deep was this stream?, I thought to myself.

As a consolation, our friends added: “They tend to stay away, so don’t worry. Besides the depth of this stream is not more than 6 feet”.

Well "muggers" are not ill-reputed like their cousins, the salt water crocodiles. So I took their word for it. Wildlife in general, tends to stay away from us. I soon lost those worrying trails of thought because what lay ahead of me seemed like paradise.

The water had a greenish hue and you could occasionally see schools of fishes swimming in the shallow water. The stream breadth was not more than 20 feet and the depth was not more than 5 feet. We regularly checked the depth by putting the oar in the water vertically, and it would always hit the soft mud below us. The low hanging branches which troubled us at first now seemed to help us swivel when we went too close to the bank.

We took turns at rowing and I tried to master the art of using the oar as a rudder. Since we had only one oar, Atul’s flip-flops served as the second oar! After what seemed like a blissful ten minutes, we started to come across routes which had more human interfaces. The stream here was wider and you could see that the banks were frequented by people; there were flat stones (on which people can sit) and footprints all over the bank. A middle aged woman who was washing clothes at the bank, watched us in amusement as we fumbled with the oar.

After this stretch, it was absolute solitude – there was no trace of any human habitation. The whole place looked absolutely serene except for the occasional junk that we found in the flow - glass bottles, plastics, packets, shoes etc. Though disappointing, it did not manage to steal the thunder of the stream, which continually kept us spellbound with her beauty and grace.

The flow was getting stronger and we were thinking of turning back when we realised that there was no way we could go further. A palm tree had fallen right across the breadth of the stream and blocked our path. We had to turn back.

As we hit the palm tree, we saw large amounts of orangish-brown froth (probably oil mixed with detergent water) accumulated near the bark. Tube-lights, bottles, clothes, shoes, thermocol and rubber pieces lay in the midst of that oily slick along with a random assortment of other junk. 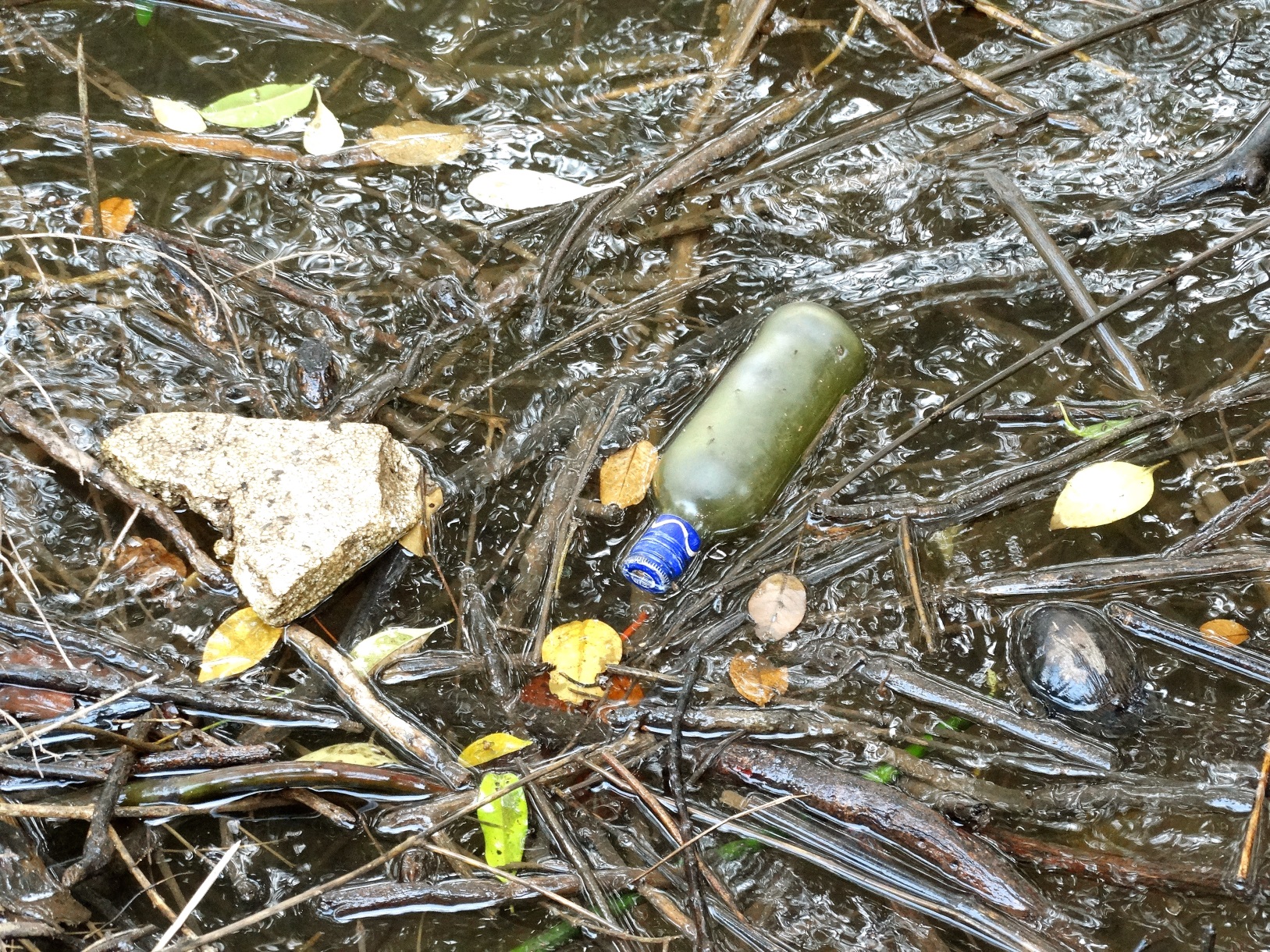 We decided that we should not be discouraged by that ghastly sight, and braced ourselves for what lay ahead- an upstream journey, against the flow of stream. Every time we managed to move a bit upstream, the flow would take us back downstream! We had to think of a better way to head back. Atul decided to do the rowing while I was in-charge of retaining our location.

So he would row till we reached the nearest low-hanging branches and the moment we reached it, I would hold on to the branches tightly, just ensuring that we remain there till Atul regained his strength. Subsequently we switched roles and I did a bit of rowing while Atul helped with the branches. But two amateurs like us were no match for the strength of the stream’s flow!

We had to get down and push the boat by hand. After checking the depth of water, the two of us jumped into the water. Splash! The cool water of the forest stream was an immediate relief for our strained arms. After this point, we seemed no longer to care about reaching back. And somehow I did not find myself worrying about wandering crocodiles! We were immersed in the chilled goodness of the forest stream, her water soothing, the canopy above us protecting us from the afternoon sun, and jewelled birds giving us company. 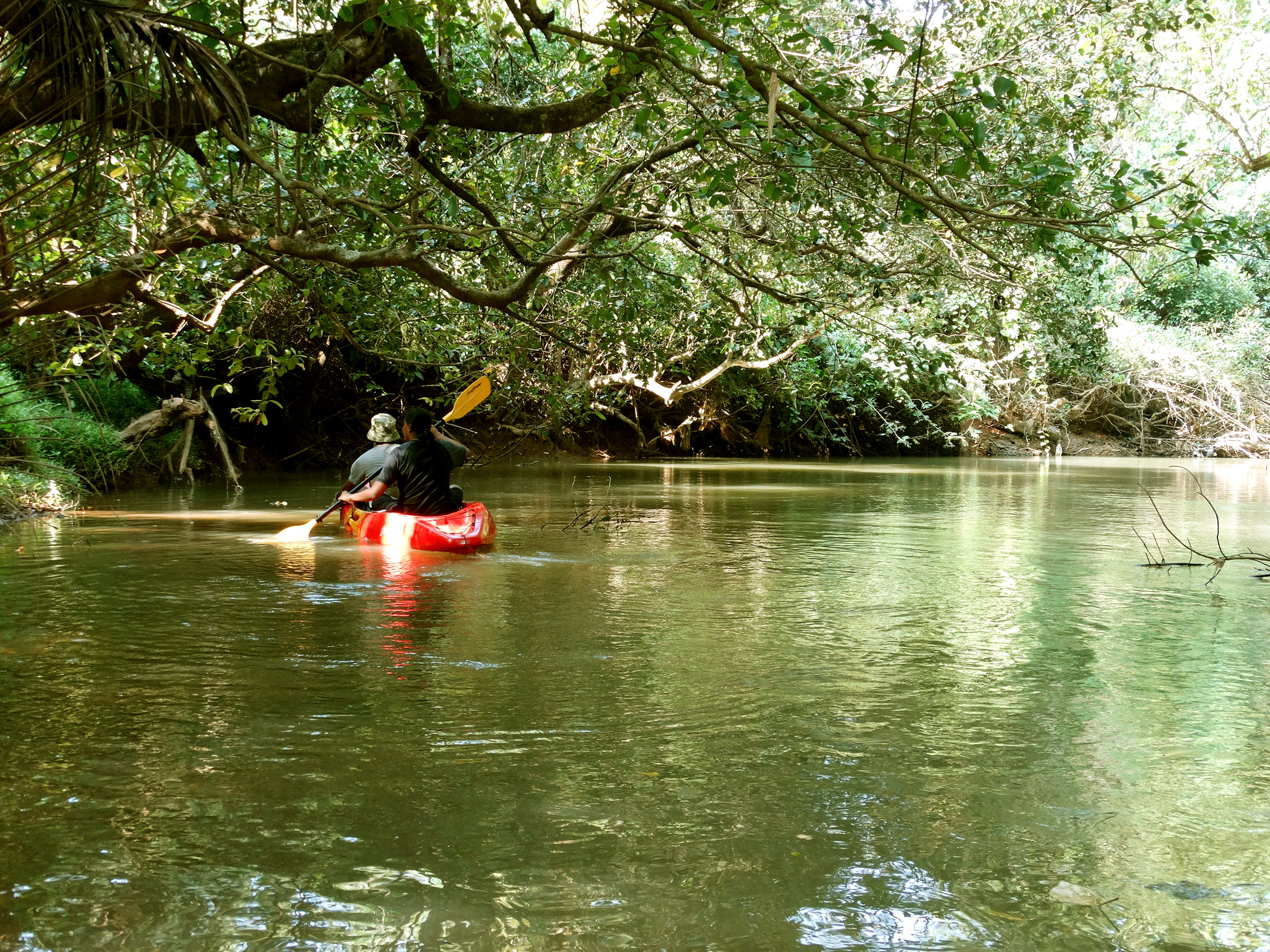 Since I was not a swimmer, Atul thought this might be a good place to start practicing. We tried to do several aerobatics while in the water which included- attempting to get on to the kayak when you are waist deep, chest deep and neck deep in water (the last one being the toughest). We also dragged the kayak on foot in the water; one of us did the dragging, the other sat inside the kayak enjoying the ride. This ‘dragging’ was the only way to get the kayak to move against the flow; this also ensured that our energies were conserved for the full journey back. We also took turns holding on to the back end of the kayak and enjoying a swim while the other pulled the kayak from front.

At places where the water got too deep, we traced our route back till we reached a spot where water was shallow and then kayaked our way through the deeper patch.

On one such particular stretch, I remember, I was pushing the Kayak and Atul was sitting inside. Suddenly, an unexpected dip in water depth caused me lose contact with the stream bed. I got frantic and clung on to the Kayak, because my feet were no longer touching the stream bed. Atul who seems to have a cooler head during a crisis, asked me to be calm and hang on to the kayak. I held on with all my strength (now that I think back, even if the depth was 7 feet, I could have just sprung back up), as Atul controlled the direction of the kayak as we headed downstream again. We back-tracked for a bit… a few tense moments later, I could feel my feet scuff the stream bed. I got into the kayak (the practise before came in handy) and as planned, we kayaked through the deeper patch.

Once the water got shallow again, plop!! Into the water again, we would jump! It was quiet now. Since it was past noon, all human activities ceased. The villagers must have headed back to their homes for lunch or an afternoon siesta. It was just us and nature. Thanks to the undisturbed path that lay ahead, we were treated to a kingfisher show. 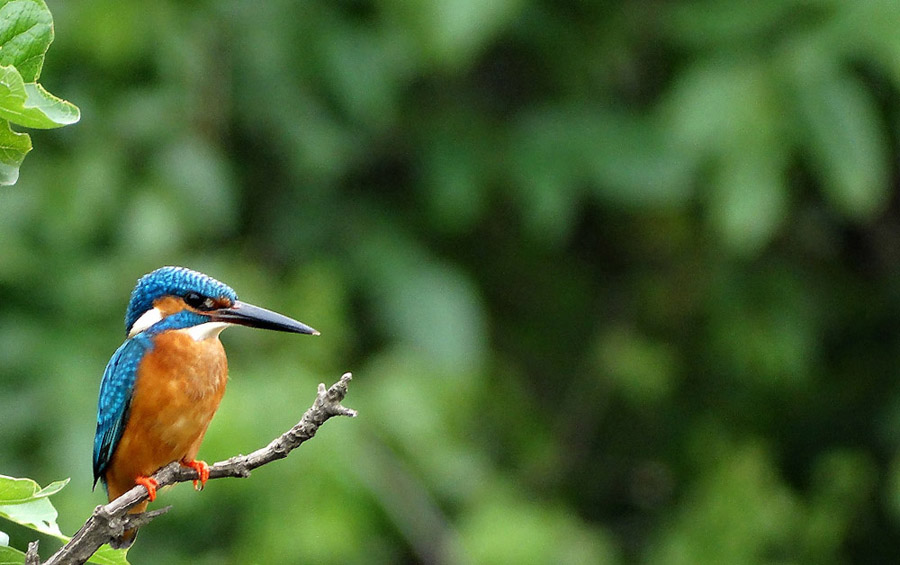 We saw about seven small kingfishers parked on the low-hanging branches eagerly spying on the fish and making their move. The more abundant common kingfishers and the rare blue eared kingfisher looked like sapphire and azure streaks when they criss-crossed our paths. Once in a while, we would encounter the white throated kingfisher too! Birds were chirping and inquisitive grey langurs followed and gave us threatening looks. The larger langurs swung branch to branch keeping up with our kayak, while the smaller ones hid behind the bark and gave us curious looks. We were so carried away by the beauty and the serenity of the stream and all the wildlife that we saw, that we missed our starting point! We ended up going further upstream till we reached a bridge. We turned our kayak around and this time, let the flow take us down (again!). We paid more attention to the banks this time, since we had to identify our original docking place.

Finally we reached our spot and were about to dock, when a beautiful snake calmly slithered her way through the bushes near the bank. We waited for her to pass and then we docked.

Indeed, it was afternoon well spent with nature. 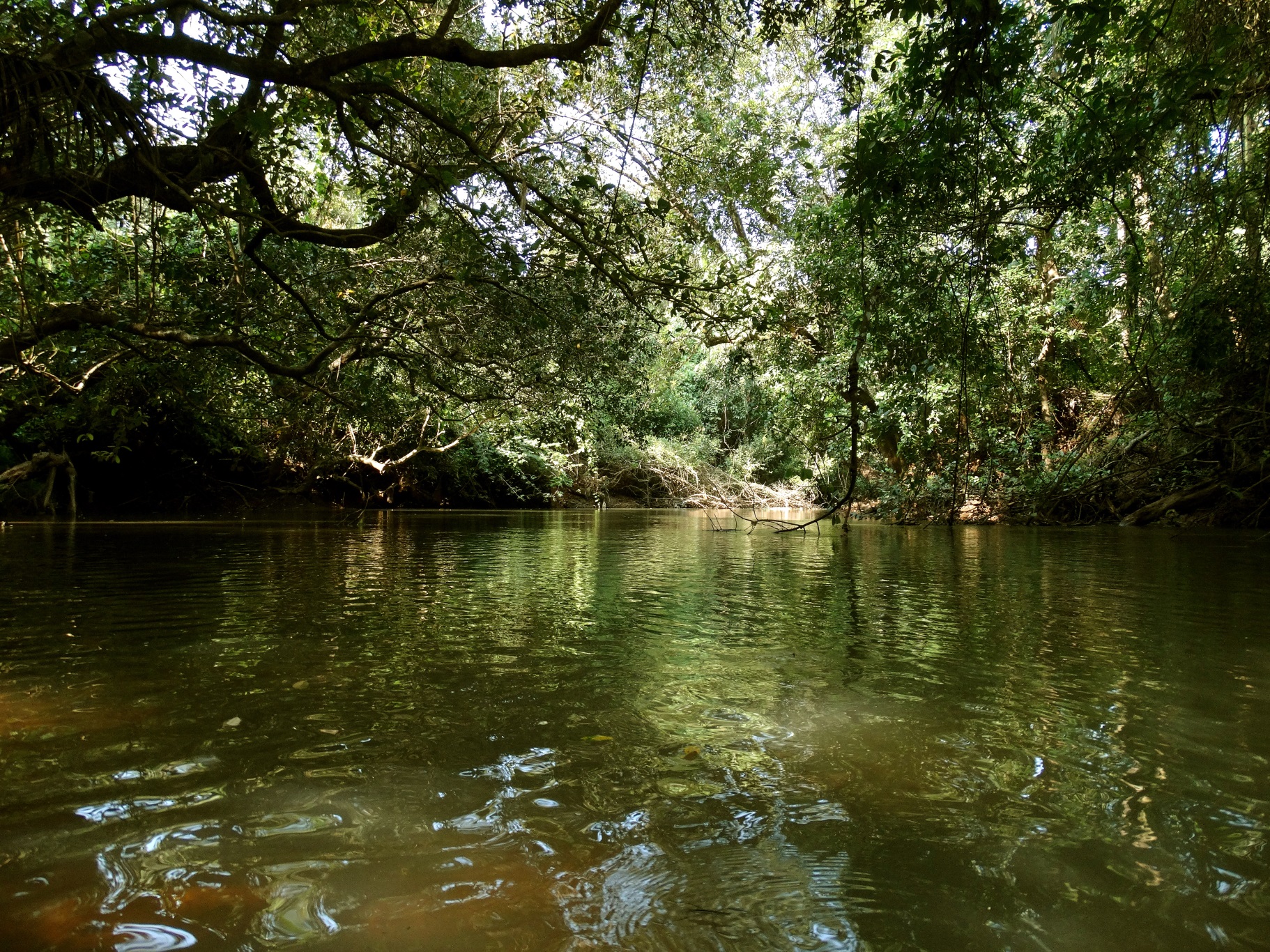 Additional information on Gaia Farms: Gaia Farm @ Gulduve is one of the pioneering initiatives of GaiaMitra, which is a movement of people committed to evolving a nature-rooted heart centred alternative model for human development based on the notion of regeneration not consumption. Some of the initiatives at Gaia Farm include- regenerating the soil through natural means, permaculture, bio-diversity research, learning from indigenous knowledge of the ecosystem and construction techniques and fusing it with modern knowledge from outside. One of the main aims of the Farm is to create revenue models for the villagers by sustainably using the locally avilable resources in production techniques at the same time respecting the value and worth of the local ecosystem. (Source: GaiMitra; site under construction).

How to reach Gaia Farms: Maharashtra State transport buses pass through Gulduve main road (near Aronda). You can get off and ask for Joshiwadi. Alternatively you can drive from Maharashtra side or Goa side; the farm is located in 'Joshiwadi' hamlet of Gulduve Village Panchayat in Sawantwadi Taluk, Sindhudurg District, Maharashtra.