The members of ‘Tetragnathidae’ family of spiders are commonly known as the long jawed spiders. Called so because of their relatively longer mouth parts or more specifically called ‘chelicerae’, or the fangs. The other thing that distinguishes them is, the first pair of legs is much longer than their second pair. These are orb-weaver spiders, building small to medium sized webs, generally suspended horizontally or at an inclination, above or close to water. This was exactly where I found this pair.

As I stepped into a narrow stream to photograph a beautiful damsel fly known as the Stream Ruby, I noticed a sudden hustle of activity beneath one of the spider webs that stretched over about a foot or two above the water’s surface. I got closer and saw two spiders, one of them seemed to be pursuing the other. It was a mating pair of long jawed spiders. The one on the left is the male and the female is on the right. The male was following the female, tantalizing her to mate with him. 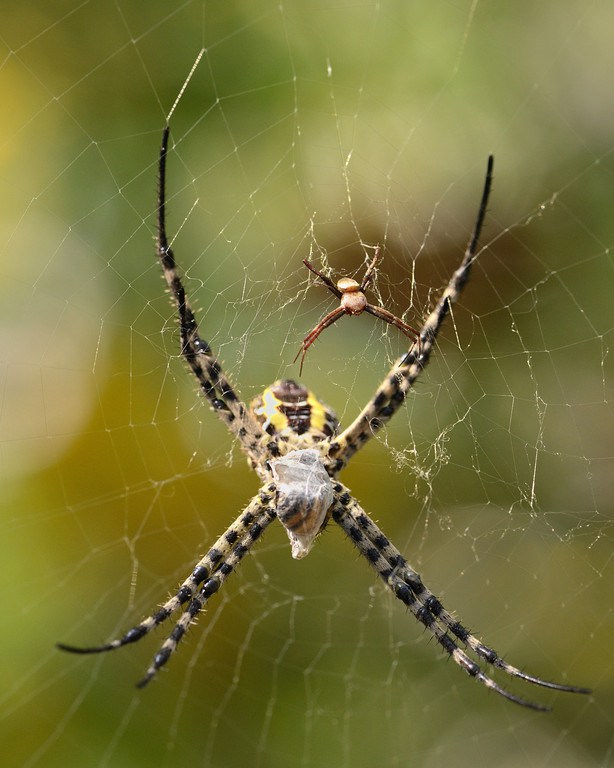 Because of this enormous difference in size, males are quite wary of the females. Thus mating is a very risky business for the male. A small mistake on the male’s part could cost him his life and instead of having the female as his mate, he might end up as a meal on her dinner plate :)

However, this doesn’t seem to be the case with the spiders in topic here. As you see in the first image above, the male and the female are almost comparable in size. It has been observed that the members of the ‘Tetragnathidae’ family of spiders, are very open about sex and mating. In other orb weaver spiders, the initiation or conveying the intent to mate, is the onus of the male. He gently comes down to the female’s web and makes some movements to indicate his intention and very carefully approaches her. On the other hand, Long-jawed spiders break this rule. Their females seem very much interested right from the outset and they also seem to communicate their readiness to the males. 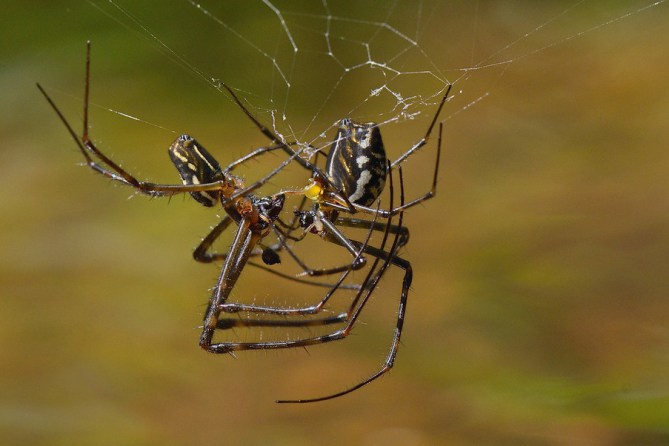 Once the acceptance from the female comes through, the male rushes in, locking his long palps with those of the female’s. Then the ritual begins. The male brings his palp, dipped in his seminal fluid containing the sperms and inserts it into the female’s genitals called the epigynum, which lies on the underside of her abdomen. This is what you see in the image above.

This process can occur multiple times over a period of time. After the insemination, the female has the ability to retain the sperm mass outside of her uterus in a specialized structure, spermathecae, until her eggs are ready for fertilization. This enables her to lay several batches of eggs. It has also been observed that the mating process can last as long as ten hours in some of the Tetragnathidae species.

That definitely seemed to be the case here. The spiders were busy, they took no notice of me leaving them.