Southern Flying Lizard (Draco dussumieri), more commonly known as the Draco, is a remarkable reptile found across the Western Ghats and few other hills of southern India. Owing to its gliding ability akin to flying, it is referred to as the Southern Flying Lizard. Though it is common in the forests of Western Ghats, you mostly see them climbing on Beetlenut trees. This lizard species is one of the masters of camouflage, spotting them amidst forest tree trunks with rough texture is close to impossible.

A Draco’s day begins with morning sun rays streaming in through the canopy. Starting at the lower middle region of the tree trunk, it makes its way up gorging on the numerous ants that keep crawling up and down the trunk. Once it reaches the top, it opens all its limbs, resulting in the opening of extended skin (Patagial membrane) between fore and hind limbs and glides away with the air holding it up Furthermore, Dracos also have a Gular pouch on the throat which can be extended to communicate with other males to defend territory or females during displays for courtship When on a tree, the tree becomes the Draco’s territory and it defends the same.

On one of the usual beautiful mornings in Agumbe, I spotted and followed a male Draco and it turns out, it was an unusual tough morning for him. 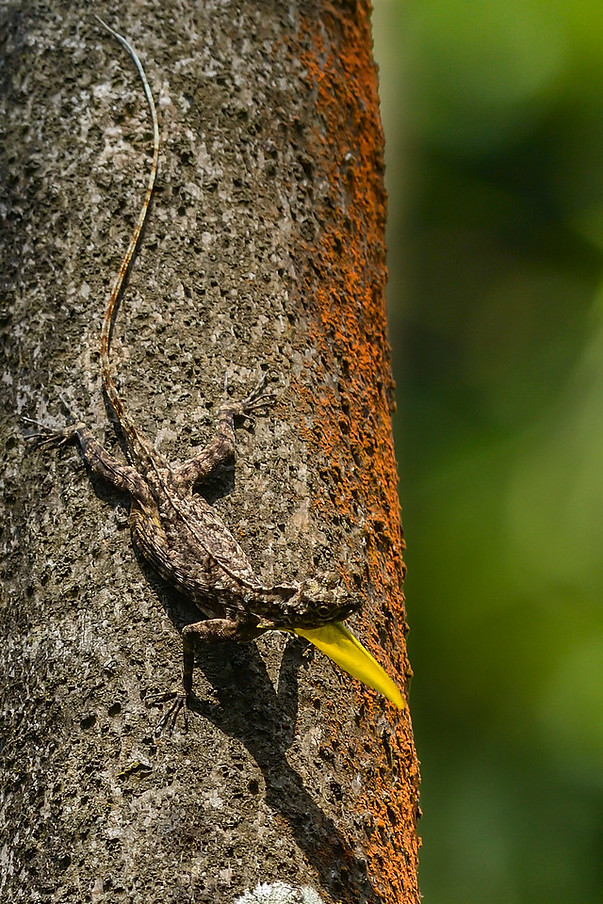 He happily started climbing up the tree trunk feeding on a variety of ants crawling up and down. When he had walked up more than two third of the tree, he noticed another male Draco on the same trunk feasting on ants. Immediately, he seemed to be warned and extended his gular pouch and started moving towards the new male.

He reached the new male and circled him, I guess in the hope of intimidating the intruder, this act repeated a few number of times. There was nono impact on the new male from this act whatsoever, he went on munching on the ants with no care for this other male trying to scare him. Our male noticed this careless behaviour of the new male and seemed to accept his defeat in intimidating this new guy on his tree. Eventually, our male glided away to another tree.

The new tree on which he glided on had another interesting encounter waiting for this male. This time, there was no competing male, instead there was a female already occupying the tree trunk. Again, the male extended his gular pouch and posed, it was tricky to decipher information from this move as it could be an attempt to court the female. Observing the male, the female then extended her patagial membrane and the interaction between them continued in the same manner. He extended the gular pouch and she extended her patagial membrane. Finally, it looked to me as though she had disapproved. Later I observed the male gliding to another tree located at a distance. 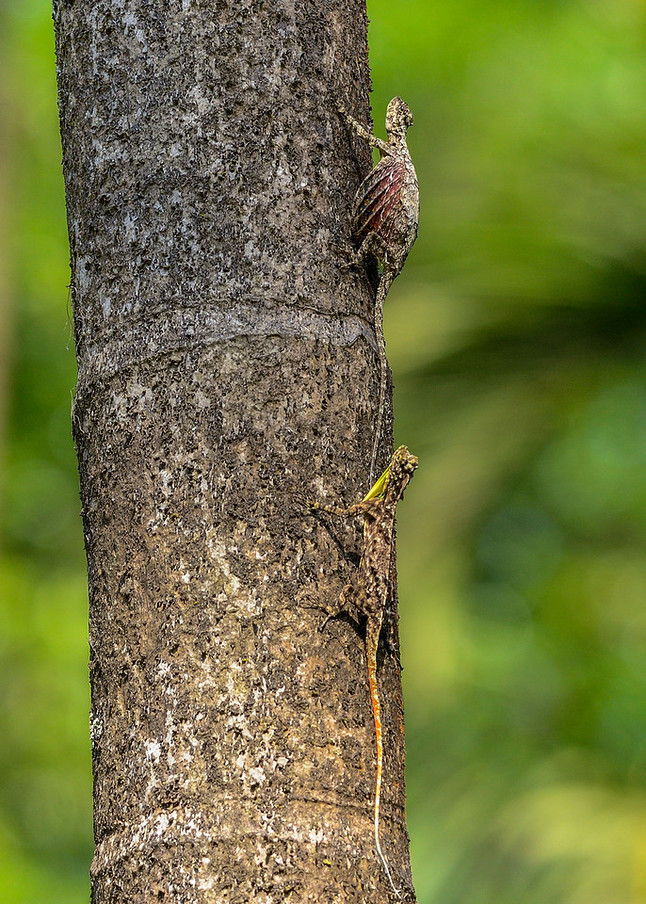 These observations have been such invaluable insights into the natural history of this elusive canopy reptile species. I attempted to understand these interactions and decipher information with a human's perspective. That is the best we humans can do to understand animals and hence observations can be biased. It has given me immense delight to share this photo story to you.