I have been visiting Thattekad - Salim Ali Bird Sanctuary in Cochin during the winter from the past two years . Given its diversity and abundance of bird life, a birder like me would love the place. During my last visit, I was hoping to see the Grey-headed Bulbul, which is one of the special birds of this place, but so far I had not been able to get a glimpse of this feathered beauty.

I strongly wanted to get over this disappointment and hence a few weeks later I decided to visit Thattekad-Salim Ali Bird Sanctuary again. Grey-headed Bulbul was the target species, I spent a full day looking out for it to ensure I do not fail this time.

The day turned out to be a lucky one for me, the first bird I saw was a Grey-headed Bulbul! There were around 10-12 birds, feasting on fruits called "muLLiyampazham" in the colloquial tongue, Malayalam. Later I learned that a plenty of Grey-headed Bulbuls are found around this tree species As it was towards the end of fruiting season, I did not see them in large numbers. But an accomplished target brought me immense happiness and I knew that seeing anything more would be an added bonus.

As the day continued, I also feasted on food to stop my hunger pangs. Later, I was aiming to see some Cuckoos while birding in a thicket. Though I did not see any cuckoos, I saw an Indian Pitta. It was flying low and landed inside a thick bush. As I followed quietly, I noticed that there were two of them. Two birds together always leads to interesting behavioural observations and the thought excited me. So, I observed and made an effort to click some images of both the birds in one frame. But, the bush was thick and thorny and could not get close enough. Therefore, I stayed still as I wanted to savour every moment I could observe without causing any disturbance.

Unaware that a stranger was observing them, the birds went on with their business. In no time, a territorial combat started with some spectacular displays of power. I have summarized the displays in the order in which they occurred:

Both look at the left with their neck stretched 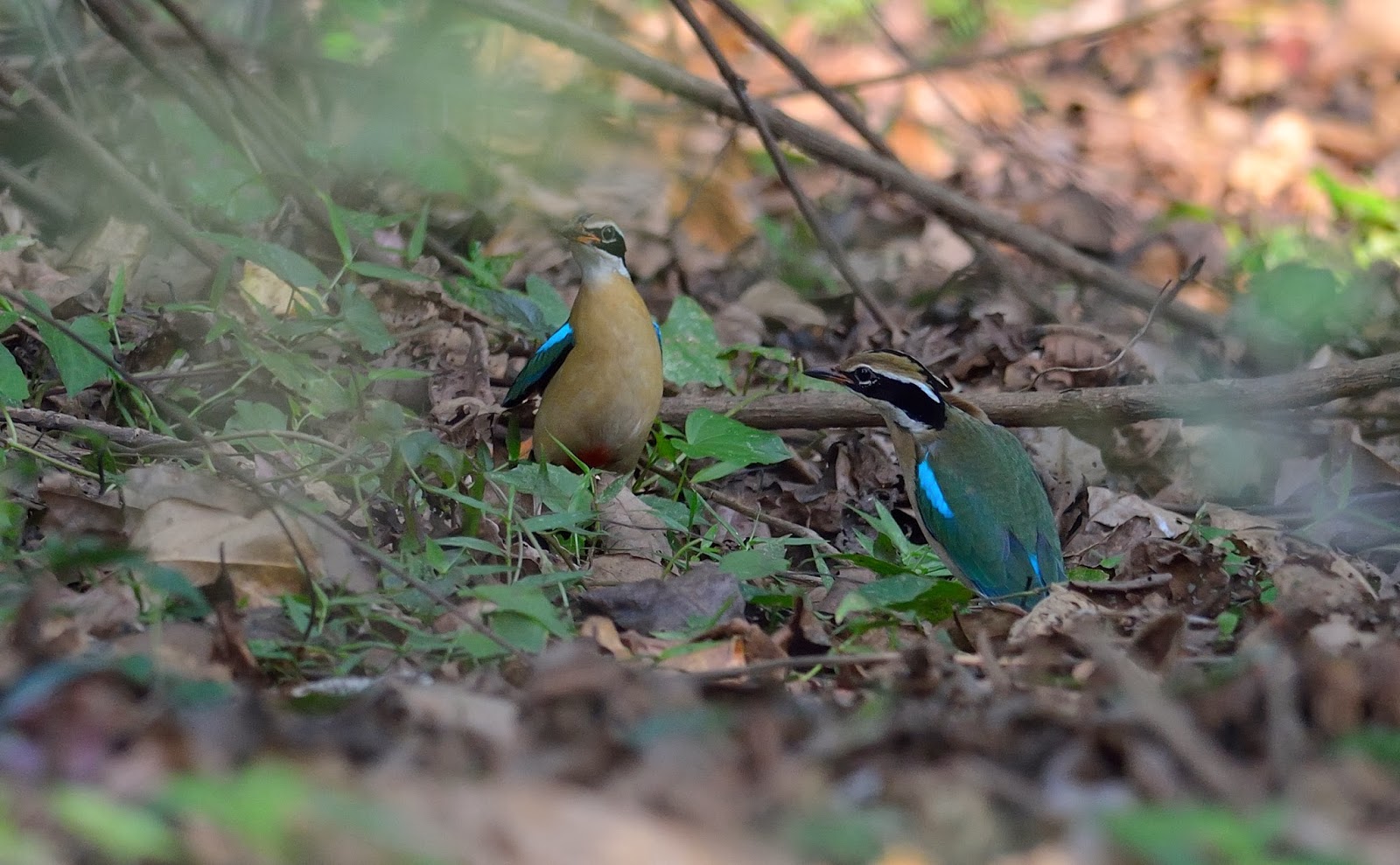 Then they look at the right with neck stretched 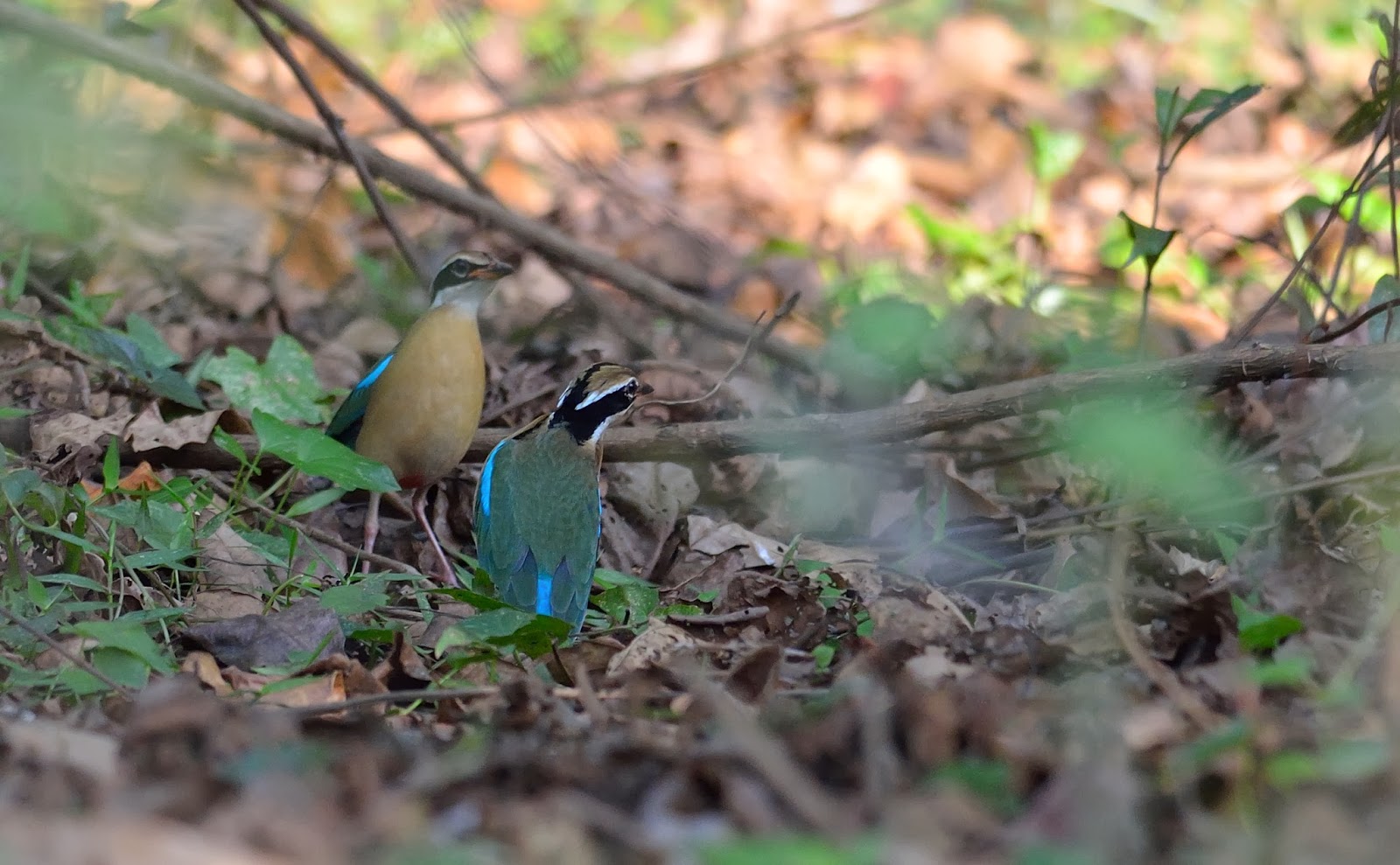 Both the birds display a side view pose (lateral view) 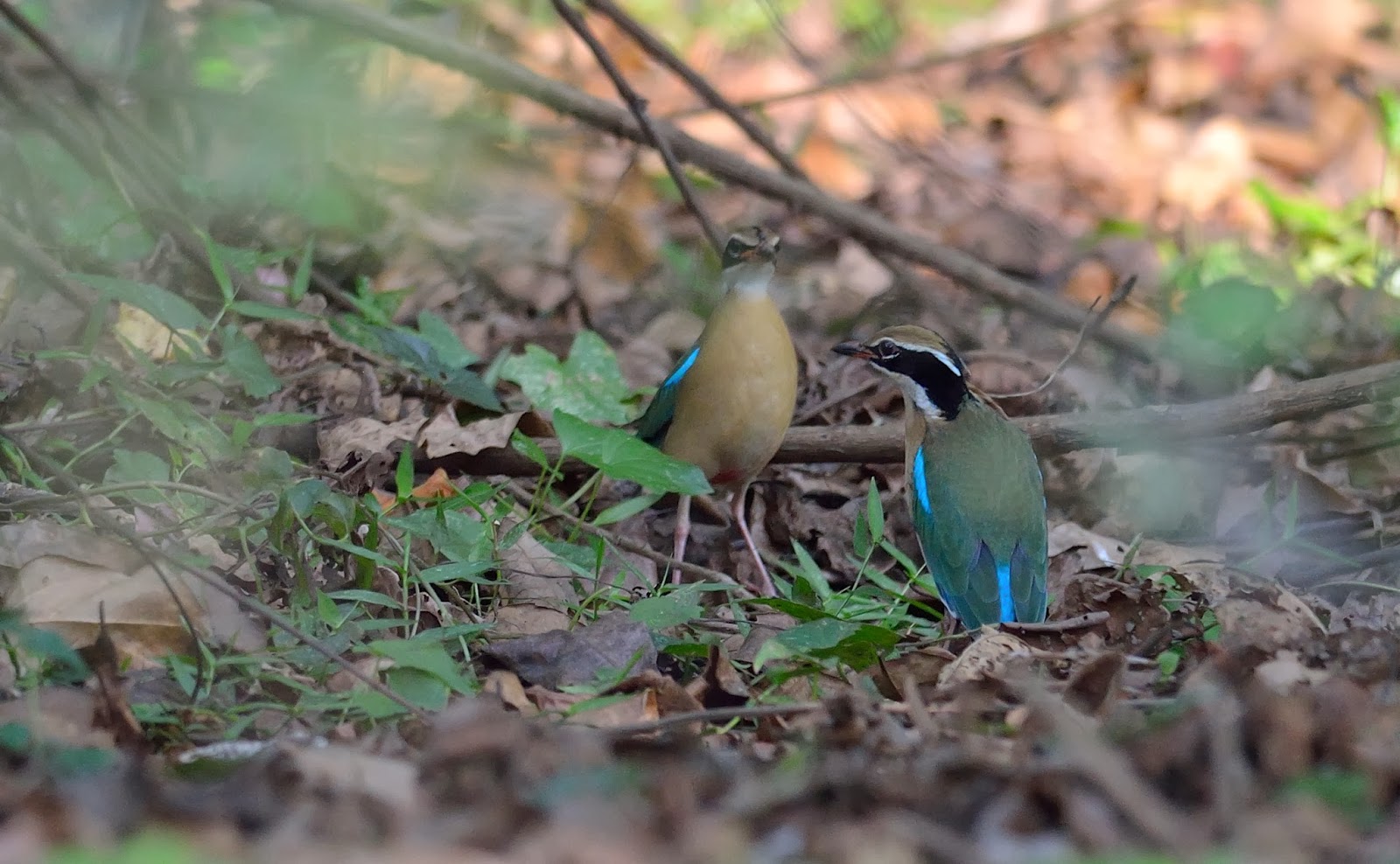 They spread their colourful wings on the ground 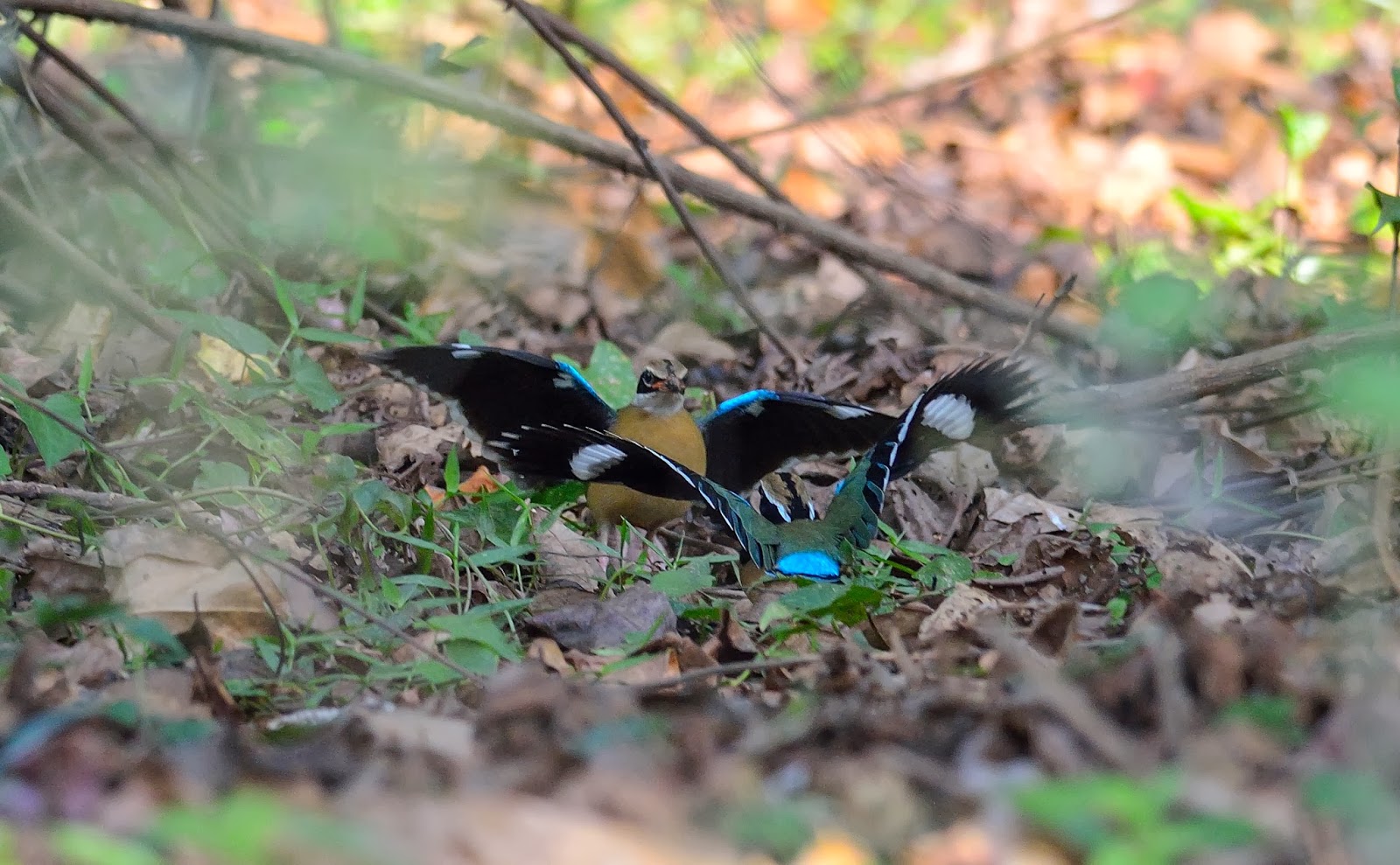 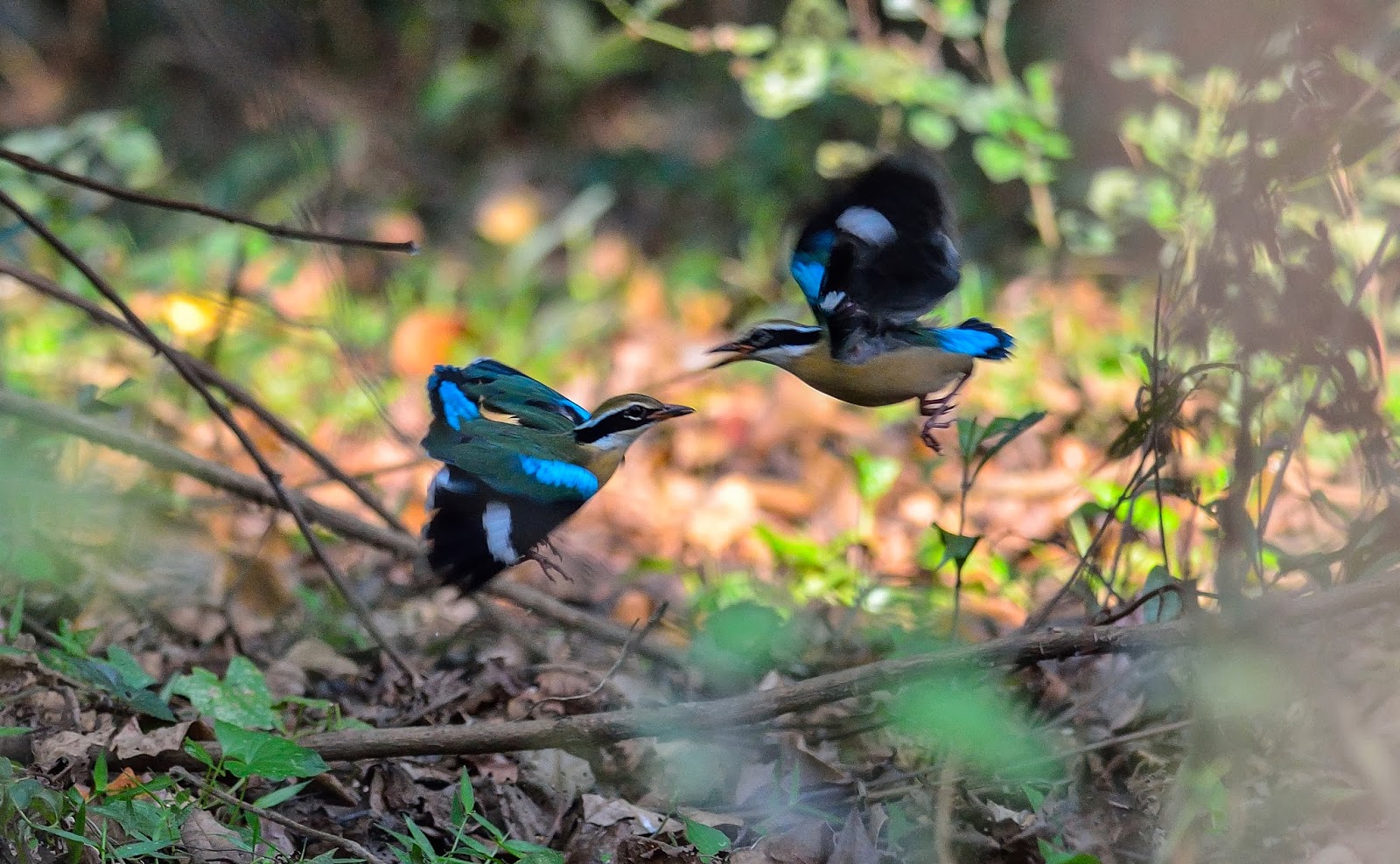 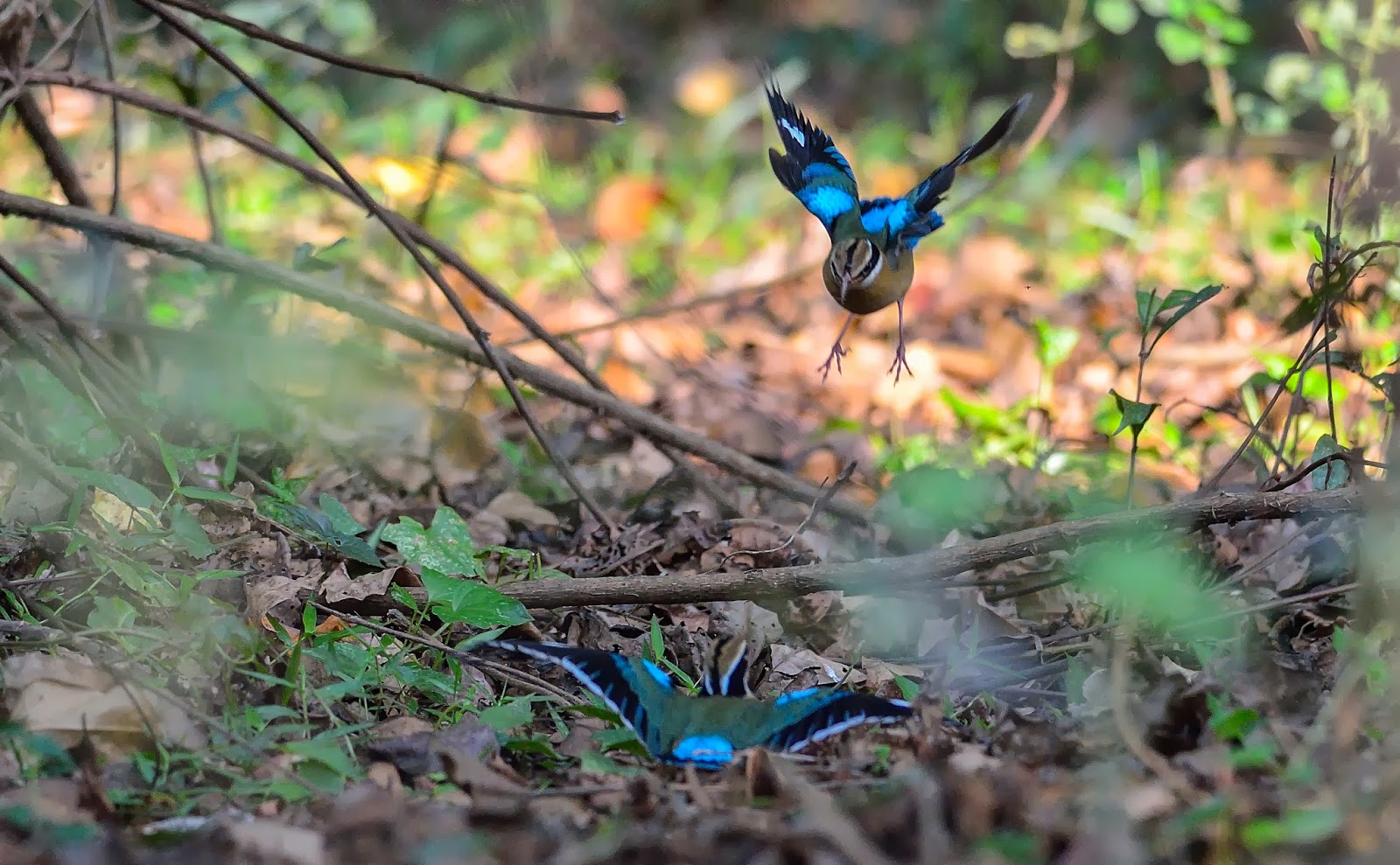 On previous occasions, I have observed the bird Indian Blue Robin also using similar tactics of stretching the neck and staring at the opponent.

This cycle of events occurred three to four times during the span of my observation. Even though I intended to capture all these moments accurately in my camera, the distance and the bush proved to be a challenge.

A curiosity was born in me, I had to understand what was happening. I tried the first choice, Google and Wikipedia did have some interesting observations. The information was based on observations made on African species, Pittas are known to be territorial and migratory species and are known to defend both their feeding and breeding territories. They perform territorial displays on the edges of their territory but fight between the rivals had been recorded only once. Refer Wikipedia:Pitta for more information.

The Indian Pittas I observed, were trying to attack each other by jumping towards each other. This seemed to me as a fight, however, I am not sure if that is all there is. I would like to be convinced this is a rare occurrence but it could also be due to the limited time we spend in looking for them and observing them, the more we bird, better will be our understanding of this unknown world of wars. The thought of this elusive Navrang Pakshi ( Indian Pitta in Hindi) haunts me every time and the hope of another interesting encounter does not seem to evaporate with time.