This happened sometime back. However, it is one of those sightings that stays with you for years and one, which you reminisce upon over time.

This was in November of 2012, the place, the wonderful grasslands of Tal Chapar, in Rajasthan. Was on a birding trip there, with Shreeram of Darter Photography. My first outing to the northern part of India for birding.

It was on the second or the third day of our stay there, if I remember correctly. We were on one of our routine evening safaris through the grassland, hoping for some good sightings of the roosting harriers. Driving around, we had some good photographic opportunities of Black bucks ( which are aplenty in the park ) and saw a good sized monitor lizard right on the vehicle track. Then, we started looking around for Harriers, of which we saw quite a few of them retiring for the day and settling down among the grass, but they were quite shy and would take off just as our vehicle approached them, albeit slowly, typical Harrier behavior ! :-)

It was almost sundown and with the Harrier’s not being very cooperative, we thought of checking out the water tank that was in the park, expecting some activity there towards the end of day. Just as we neared the water hole, we saw a big sized bird sitting on a bare tree trunk just by the side of the tank. Looking at its size, we thought it should definitely be an eagle, an Imperial Eagle perhaps ? . It did allow us pretty close, but just as the second vehicle of our group approached, it took off. We were still not sure of its ID. That is when, Shreeram’s friend and wonderful birder, Sharad, who was in the other vehicle, ran across to us and said ‘Do you know who that guy was ? ‘, Boss, it was the White tailed wala, the White tailed Eagle!!

We were dumb struck. It had not been seen in these parts, in a long long time. It was a record of sorts :-) …. All the discussion during that night’s dinner centered around the White tailed Eagle ! 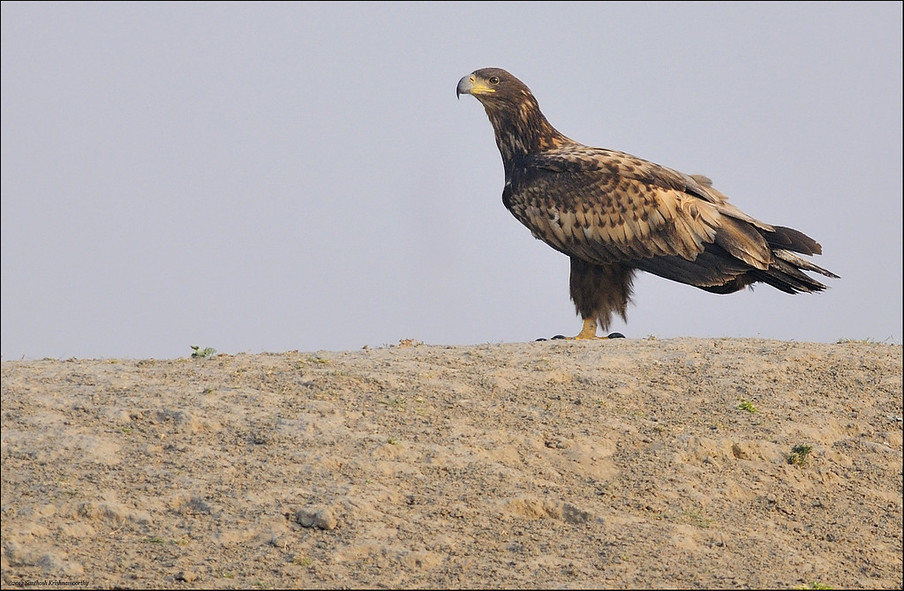 A quick brief on this majestic bird. White tailed Eagles breed mostly in Northern Europe and Northern Asia. Largest population of it in Europe is found along the coast of Norway. Most of their population is believed to be resident, with a very small number of them migrating south for winter.

This one surely was a vagrant, having diverted somehow from its intended path, ended up in in Tal Chapar, to our good luck :) They are huge birds, with their wing span measuring the range of 7-8 ft. The one we saw, looked like a juvenile and was huge. Here’s a image to show a comparison against a common house crow. The crows were trying to chase away this huge predator, but the big guy was least bit bothered. 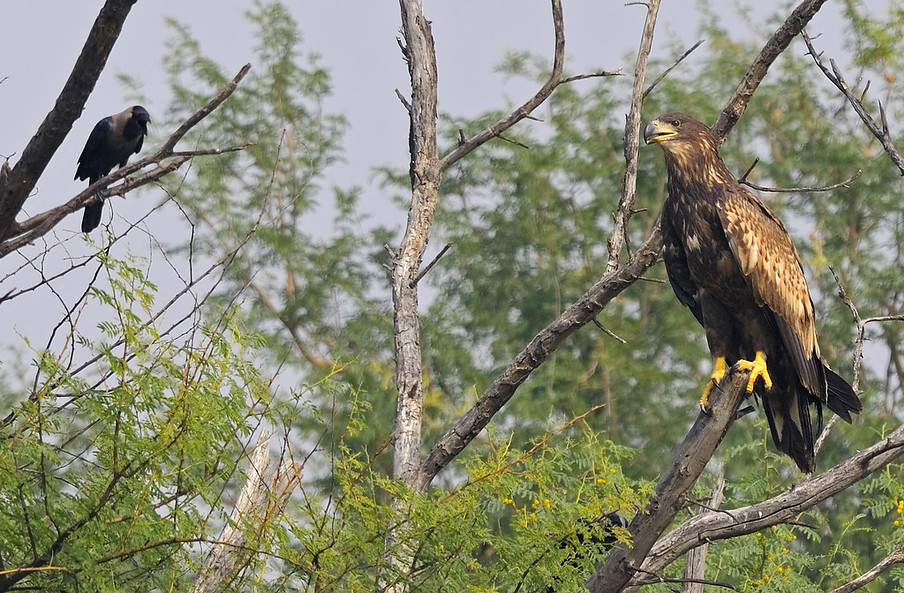 We were wondering if we would see this guy again tomorrow or he, having strayed off of his course, might have made an exit after a quick pit stop here. But, we were to be pleasantly surprised the next day. 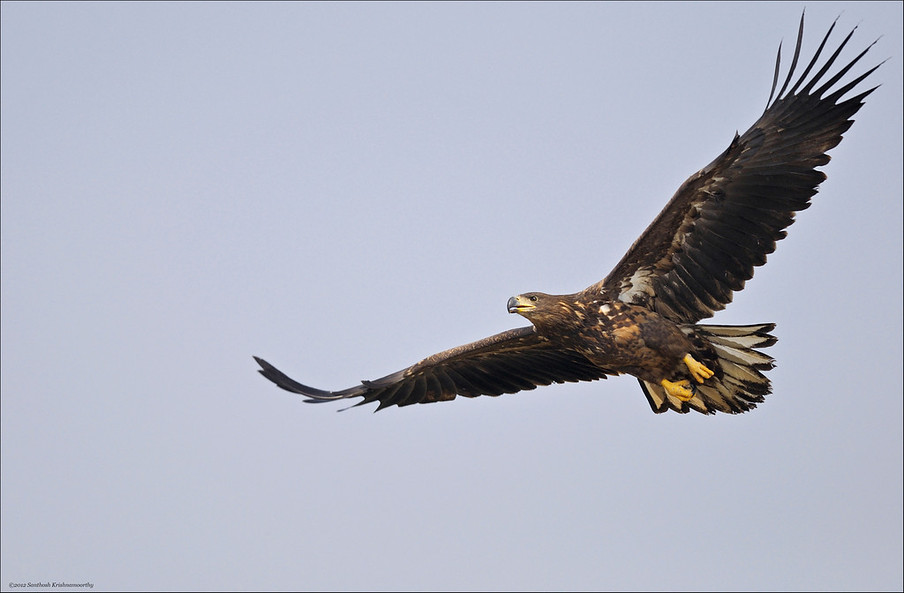 The White tailed Eagle had indeed decided to stay on for some more time. We didn’t go looking for it in the first half of the following day as we were headed to a different place and also, we thought, giving the vagrant some time to settle into his new, unexpected home would be better. When we came back to the park in the second half, we saw this beauty and without a shadow of doubt, we were all very happy. 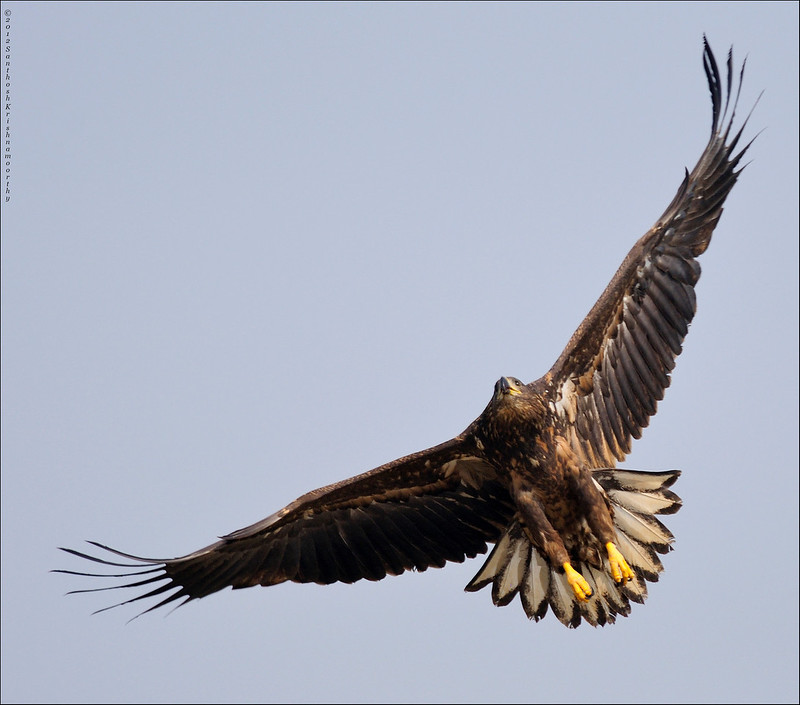 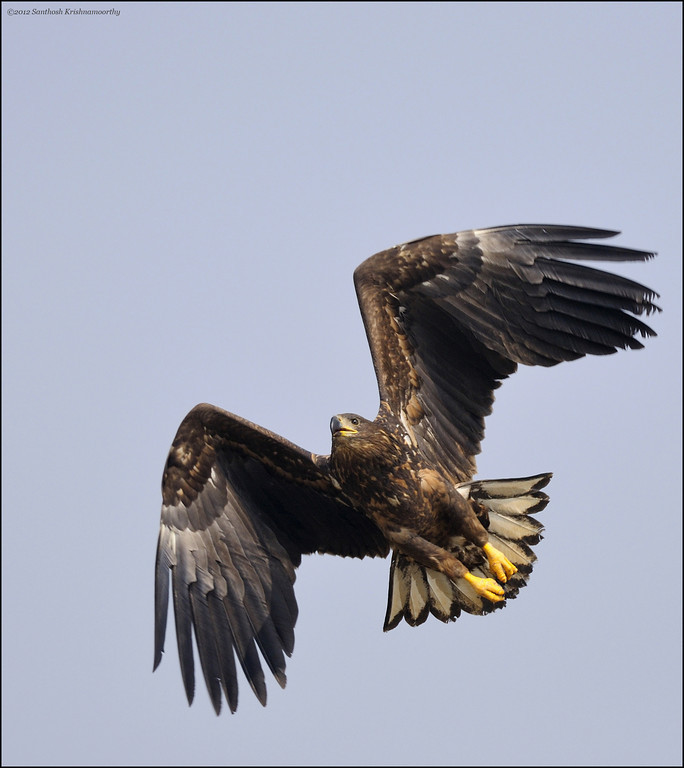 An amazing sighting and a wonderful experience, the big highlight of the trip for me and something that definitely is etched forever in my memory……