Agumbe - this place is one of my favorite from my childhood, for couple of reasons. I love snakes, not sure from when!!! Of course my favorite snake is the king of snakes - King Cobra. Agumbe being the King Cobra capital is my primary reason to love this place. The other reason is, I like Malgudi days which was shot in Agumbe's Doddamane. Later, I become a big fan of Gowri Shankar - the herpetologist I admire the most.

I am thankful to Shreeram, without whom I wouldn't have enjoyed Agumbe and met Gowri. This is my 4th trip to Agumbe with Shreeram & Gowri. Unusually, this visit was planned on a summer time, to cover the reptile activity during this time. Usually, we visit Agumbe in monsoon.

Summer is the time when king cobras actively come out searching for mates. That's the key attraction of the trip. But they are very elusive and avoid humans as much as possible. But we were hoping to see a king (or a queen) if there is a rescue call.

So we reached Agumbe in Gowri's new place - Kalinga Center for Rainforest Ecology (KCRE) early morning. Bird activity was good in the morning. Also, we were greeted by Flying Lizards (Dracos). After a quick breakfast, we headed for macro photography, searching for unique and amazing subjects.

We were clicking Katydid & Horse fly near a bush, while Shankar Subramanian's(my friend, fellow wildlife enthusiast) wife was sitting in a "safe" place in a pathway on a root, which was not that dense. It was all silent, calm, cool, only could hear the cicadas & barbets.

To all our surprise, there was a 12 ft king cobra just around 5-6 feet from her... Unbelievable moment... I couldn't believe my eyes... ! We were all shocked, hoping nothing should happen her... there is no anti-venom for this snake bite... 5 feet is nothing for a king... it's almost 3 times the distance, and it is faster. 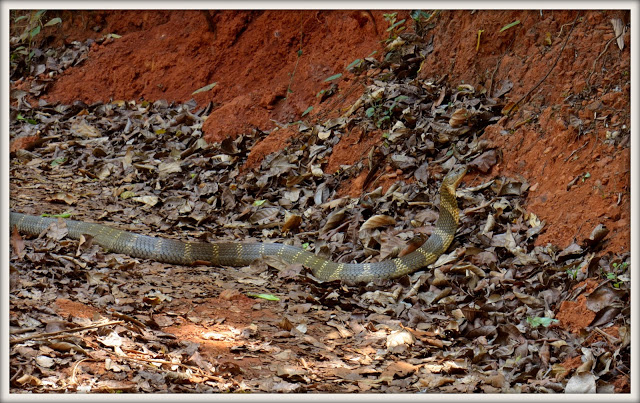 The king was crossing the path. It was passing over Shankar's wife's back. She heard the sound of dry leaf indicating something moving behind her, and she first saw the tail on her right and thought its a skink. Then she looked at her left and the thing grows bigger and bigger to a huge king cobra. She was breathless for a minute before shouting "snake snake".

Now, Shankar was calm & clear, and said "don't make any fast movements, get up slowly and comeback"... she obeyed.

The snake was not agitated at all, but was looking us watchfully. It took a detour instead of crossing the pathway, and decided to go back. Then it entered a huge pit, and raised its hood, and observed us carefully for sometime. 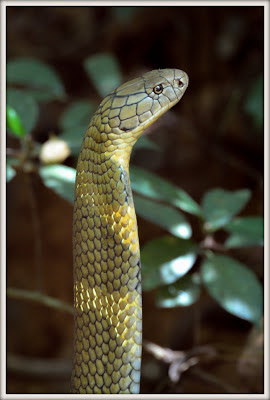 Later it vanished in to the bushes...

We were so amazed, to see a king cobra IN THE WILD. We named that place as, Kalinga Junction, and the road as KC Road (King Cobra Road)...;-)

The next day, me and Shankar's wife went to the same place and waited for an hour or so, to see the king again. But he didn't show up. Even though we didnt see him again, it was nice to spend time in that place, thinking of the previous day's experience & visualizing a king cobra there with us.