Mid-May of last to last year, we visited Tadoba for Tigers… Lot of funny things happened throughout the trip… Some of them are shared here…

The first safari… we started as the last jeep to the park, and the Naturalist we got was not talking at all. To start a conversation and get comfortable with him, I asked "What birds do you get here?". Then I noticed that his mouth was full of pan, overflowing, which might be the reason he was quite. Still he bothered to answer - "You don't get birds here. Only tigers". I thought, "WoW! what a naturalist we have got".

During the safaris, he asks for the tiger activities from other jeeps or village people or forest guards he meet on the way, and nods his head for whatever they say. But shockingly, he never goes to those places where they said there could be tigers. We couldn't understand his strategy. At one point, we thought he is scared of tigers. He never stops at a place to observe the activities, unless there is something he finds like Gaurs or Barking deer. He will be the first one to get out of the forest, at least 10-15 minutes than others.

On a morning safari, we drove the jeep through some places, and found a tiger cub (one of Teliya female cub) somewhere far-away inside the bush. Though we were not able to photograph, we were ready to wait for it to come out. But our naturalist was not ready, and we started from that place. As usual, he didn't stop anywhere else, but just roamed around the forest, though there were 3 jeeps waiting for a tiger to come out, near a lake. He said, its time to leave and we almost reached the exit gate. All of us in the jeep were irritated and cursing our 'tiger-luck'. Forget about tigers, he is not even stopping for any birds.

When we were just few meters away from exit gate, for all our surprise, we saw a huge male tiger resting in the shade. We were crossing a small 2 feet wide bridge that was over a tunnel. We stopped the jeep there and started clicking. All of a sudden, a female tiger came out from under the bridge. It was almost at a touching distance from the jeep. They were the mating couple the one we missed the previous day, and they were mating for the past 2 days, very close to an agriculture land. The male was called 'Leopard face' and the female was called 'P2 female'. All tigers are named and have their own star value here in Tadoba.

Then the tiger pair started doing some courtship rituals, right in front of us. I could manage to get the photos of some of the sequence. Later they vanished inside the bushes. 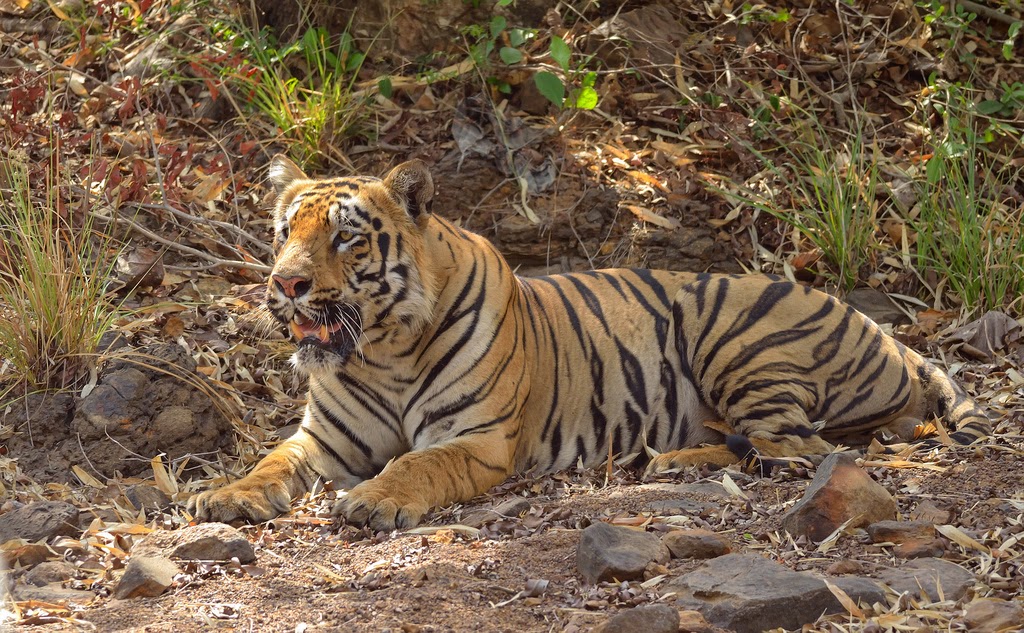 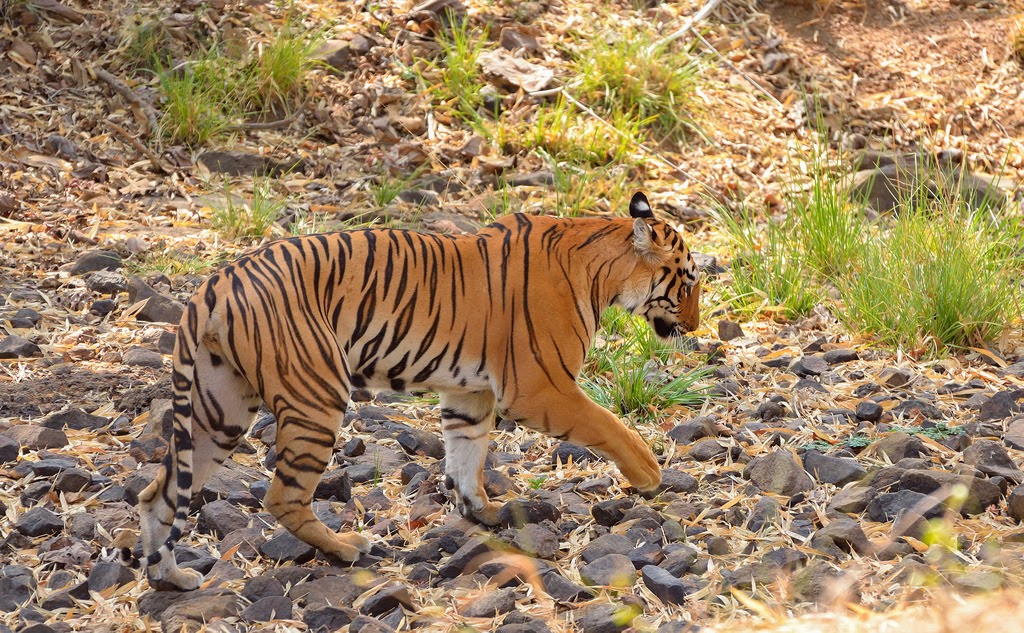 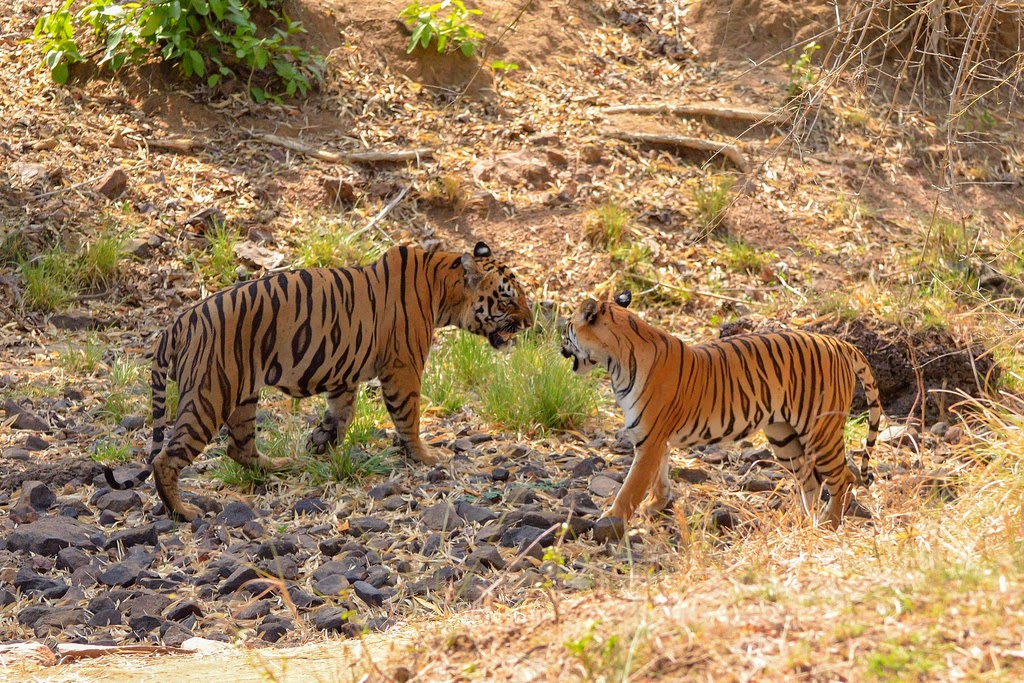 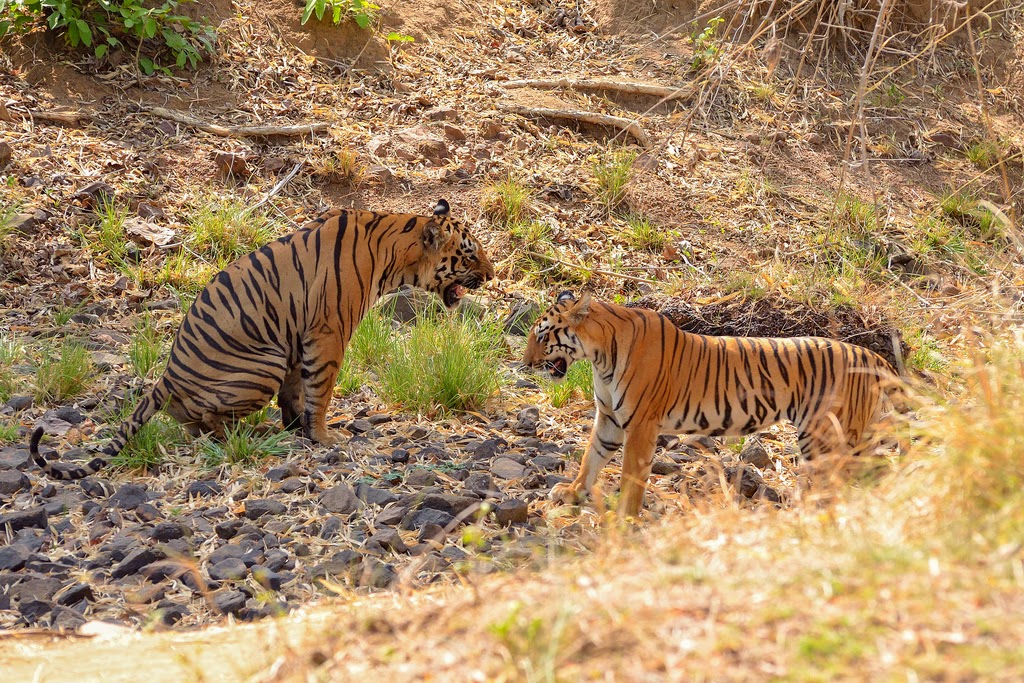 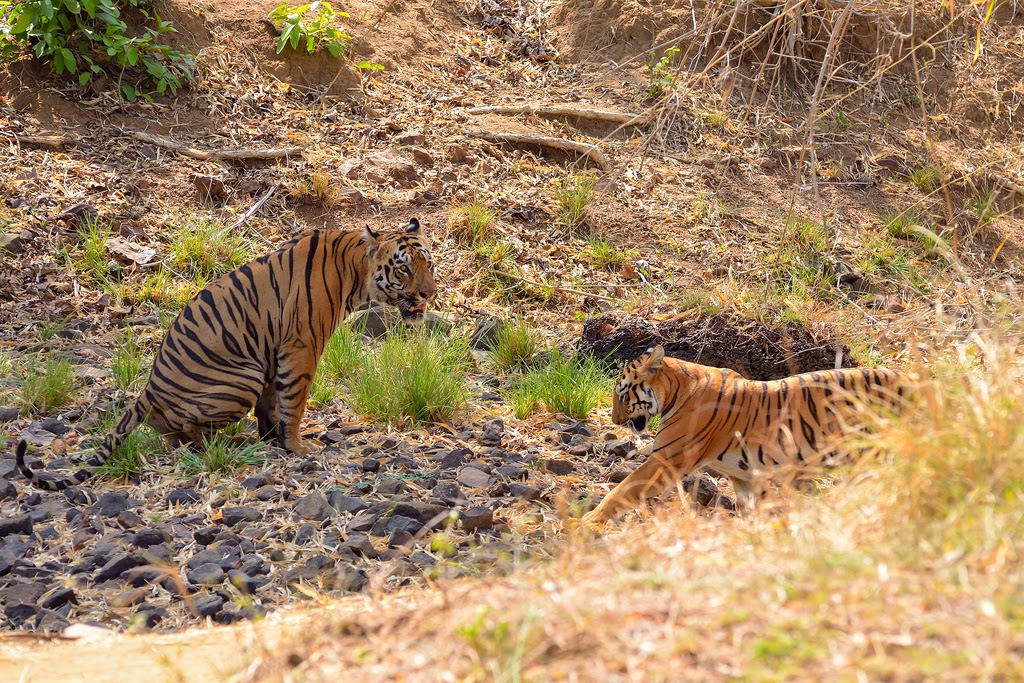 Tigers don’t have a set season for reproduction to take place. Instead they are able to engage in the activities throughout the year. However, most of the time it will occur from late November through early April. Males are ready to mate when they are approximately 5 years of age. For females it is about 3 ½ years of age.

During the courting process you may hear tigers making a variety of howls and whines for each other. The males usually start this off but the females are very likely to respond. When they do come into contact with each other a dance of smelling each other, purring, and even rubbing against each other is very common. Some couples will go as far as to lick and to groom each other as well.

When a male and a female decide they would like to mate with each other, they will engage in the act several times over the course of a couple of days. That is how long the female will remain in heat at any given period of time. It is common for a male to mate with several different females as long as he is healthy and his basic needs are being met.

It was a wonderful experience to watch the Tiger pair, at an unexpected moment, when we were exiting the park. We might have missed the pair if we had waited at the park for some more time. That's nature - we never know what happens at what place. During my recent birding trip, an expert told me - "It is nature. No predictions or expectations. We should enjoy what it gives".